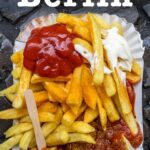 Are you wondering what to eat in Berlin during your first trip to Germany’s cosmopolitan capital city? Read on to discover thirteen must-eat Berlin food favorites that you don’t want to miss during your trip to the booming German metropolis.

Berlin is an exciting city in Germany that demands exploration. Sites like the Brandenburg Gate, Charlottenburg Palace, the Reichstag and the Berlin Cathedral are a must for travelers who want to dig deep into the city’s storied past that spans the centuries.

Parts of Berlin’s past aren’t pretty. A Nazi hub during World War II, the city was physically and spiritually split in half by a wall for 28 years starting in 1961.

Though the east and west sides of the city are now reunified, Checkpoint Charlie and the East Side Gallery remain as physical reminders of the infamous Berlin Wall and what it represented. Travelers could and should visit both attractions independently or as part of a Berlin city tour.

But history is just one aspect of Berlin to explore. This is a city that pulses with energy fueled by specialty coffee and craft beer. Artists and web developers have brought new life to Berlin while immigrants from Asia and the Middle East have made its food scene more diverse.

Leave your impressions of German food behind when you visit Berlin. While you could easily eat Wurst (sausage) and Kartoffelpuffer (potato pancakes) at every meal, that would be boring. Plus, you’d be missing out on huge portions of the current Berlin food scene.

This is a city teeming with both Michelin starred restaurants and food trucks. Some Berlin restaurants are temples to sausage while others omit all forms of meat from their menus. And it’s just as easy to find tasty food from half-way around the world as it is to chow down on traditional German dishes.

Feeling overwhelmed with all of the food choices in Berlin? One option is to get a quick introduction via a fun food tour. Otherwise, we recommend starting your culinary exploration with the following Berlin food favorites:

If Berlin were to have one signature food, that food would be Currywurst. Kiosks, stands and stalls serve the iconic Berlin snack food from dawn until dawn. Yes, you can easily find Currywurst at all hours of the day and night in Berlin. But what is Currywurst?

For the uninitiated, Currywurst is a Berlin street food typically served on a paper plate. Cooks smother sliced wurst (sausage) with tangy curried tomato sauce and sprinkle a generous amount of spicy curry powder on top. Most vendors also serve a meat-free version for people who are vegetarian, kosher or halal.

Expect to eat your Currywurst with a pile of french fries, making this dish the perfect snack food or late night treat. It’s also the Berlin food that best exemplifies the city’s global approach to cuisine with elements from Germany (wurst), the USA (ketchup) and India (curry).

Eating Bratwurst in Germany is as important as eating Pho in Vietnam or Souvlaki in Greece. Although Germans have literally been grilling sausage for centuries, Bratwurst stands are as popular now as ever.

You can find Bratwurst sandwiches at many of the same kiosks that serve Currywurst, making it easy knock these two foods off your Berlin food bucket list at the same time. Be sure to add a healthy amount of yellow senf (mustard) for the full Berlin Bratwurst experience.

Where to Eat Bratwurst in Berlin
Curry 36, Curry 61 and Kumpel & Keule

Although its origin can be traced to Austria, Schnitzel is a classic German food enjoyed throughout Deutschland. Berlin is no exception.

German Schnitzel is similar to Austrian Schnitzel. Cooks traditionally prepare both versions by coating pounded veal escalope with a mixture of breadcrumbs, eggs and flour before frying the coated meat until it achieves a crunchy, crispy exterior.

Plan to eat Schnitzel along with potato salad and pickled cucumbers at a sit-down restaurant in Berlin. Pair the dish with a glass of German white wine for maximum Schnitzel satisfaction.

Similar to Schnitzel, the meatball dish called Königsberger Klopse is another Berlin food favorite with ties to another country. In this case, those ties are to Prussia (currently part of Russia) where cooks first covered meatballs with capers and white sauce.

You won’t have any trouble finding Königsberger Klopse on menus at traditional restaurants. You can also eat naked meatballs at food stands and food markets if you’re not in the mood for the dish’s rich white sauce.

Where to Eat Königsberger Klopse in Berlin
Berlin Beef Balls, Max & Moritz and Restaurant am Steinplatz

Since the Turks and Germans have a history of cooperation that dates back to the 18th century, it makes sense that one of the most popular foods in Germany hails from Turkey. That food is the Döner Kebab.

Introduced by Turkish immigrants in the 1970s, the Döner Kebab has attained cult status in Berlin and the rest of Germany over the decades. And why not? The Middle Eastern sandwich is as filling as it is tasty.

Follow your nose and join the queue when you crave a Döner Kebab in Berlin after a late-night drinking session at one of the city’s many bars. Once your bread is filled with thinly sliced meat carved from a rotating spit, you can choose from ingredients like cabbage, cucumbers, onion and tomatoes. Don’t forget to add spicy sauce for an extra burst of flavor.

Berlin’s physical location in the center of Germany doesn’t stop it from being a European epicenter for Asian food. The city is home to a diverse variety of Asian restaurants ranging from frill-free joints serving one food genre to trendy restaurants fusing different cuisines.

You can virtually travel around Asia when you visit Berlin by eating Asian food dishes typically enjoyed in China, Japan, Thailand and Vietnam. Berlin restaurants serve these Asian cuisines and more throughout the city.

From donuts to Michelin starred cuisine, Berlin has it all when it comes to meat-free food. The city is a mecca for people who choose to omit proteins like beef, chicken and even cheese from their diet. Surprisingly, this is not a new trend since vegetarian societies in Germany date all the way back to the 19th century.

Give the Berlin vegan culinary scene a chance even if you’re a carnivore. If you’re open minded, you can taste a range of vegan foods representing different styles and price points. Worst case scenario, you can grab a wurst or döner kebab later if you’re not satisfied.

While JFK wasn’t claiming to be a donut when he famously stated “Ich bin ein Berliner,” we can understand any potential confusion on the matter. After all, Pfannkuchen are called Berliner Donuts outside of Berlin.

Discover more than 100 of the best desserts around the world.

Similar to other donuts eaten around the world, Berlin’s Pfannkuchen are yeasty pastries filled with jam, fried in oil and sprinkled with powdered sugar. You can eat one for breakfast with coffee or as an afternoon snack.

Brunch become a thing in New York before hopping the pond to cities like Amsterdam and Lisbon. Similar to eateries in nearby Hamburg, Berlin restaurants have not only embraced the festive midday meal, but they’ve also added their own twists.

Incorporating Berlin food trends like plant-based food and specialty coffee, Berlin brunches are a weekly event that you don’t want to miss when you spend a weekend in Berlin. Pick a spot and spend a leisurely meal with friends as a precursor to an afternoon of touring or a night out on the town.

Germans have been baking and eating salted Brezeln for centuries. They can even take credit for introducing the knotted Bavarian snack to America when German immigrants introduced the knotted snack to cities like Philadelphia.

You won’t have to look hard to find a Brezel in Berlin since the carbalicious treat is sold at markets, train stations and bakeries throughout the city. Depending on your mood and hunger level, you can choose a traditional Brezel, a sweet dessert version or a Brezel sandwich.

Where to Eat Brezels in Berlin
Brezel Bar, Brezel Company Berlin and Hofpfisterei

Apfelstrudel is another German food with Austrian heritage. Popular in Bavaria and readily available in Berlin, the dessert was invented by Austrian bakers at the tail end of the 17th century before traveling to cities like Italy’s Trento and Berlin.

Unless you’re lucky enough to be invited to a home dinner, you can eat Apfelstrudel at a Berlin restaurant after a hearty meal of traditional German dishes like Schnitzel (see above) and Schweinshaxe (pork knuckle). Pour vanilla sauce over your slice of Apfelstrudel to ramp up the sweetness one delicious notch.

Where to Eat Apfelstrudel in Berlin
Café Einstein and Meierei

Berlin claimed its stake in the specialty coffee zeitgeist in 2010 when The Barn opened and started distributing its beans to European cities like Lisbon, Lyon and Paris. Dozens of roasters and cafes have since sprung up all over the city, caffeinating Berliners all day every day.

Start your Berlin coffee exploration at The Barn but don’t stop there. With a little planning and the Google maps app loaded on your smartphone, you can easily visit numerous third wave coffee shops located in the Kreuzberg and Mitte neighborhoods.

Berlin’s beer scene has transcended the days when Reinheitsgebot purity standards only permitted three ingredients in the production of mass-marketed beer. Thanks to hipsters and hopheads, craft beer is now popular at Berlin bars, brewpubs and beer gardens.

Quench your thirst by taking a Berlin beer crawl if you’re limited on time. Otherwise, stake your claim on a barstool and leisurely sample different craft beers each night during your visit.

What food is Berlin famous for?

Berlin is famous for its Currywurst and Döner Kebab. Other popular dishes in Berlin include Schnitzel, Bratwurst and Königsberger Klopse.

Is food in Berlin expensive?

Food in Berlin ranges from cheap eats to fine dining. In other words, you can easily eat for well under 50€ a day or blow it out and spend much more on a fine dining experience.

Is tipping necessary in Berlin?

No. Tipping is optional in Germany.

Where did Anthony Bourdain eat in Berlin?

Where did Phil Rosenthal eat in Berlin?

Phil Rosenthal has not yet filmed an episode of Somebody Feed Phil in Berlin.

What time do people eat dinner in Berlin?

People typically eat dinner between 7pm and 9pm in Berlin. However, some Berlin restaurants stay open late into the night.

Are restaurant reservations necessary in Berlin?

Check out our restaurant and coffee guides for Hamburg. FYI, Berlin and Hamburg are just a two-hour train ride apart.

Schnitzel in Germany is more commonly made from pork than veal. Veal is expensive and you get veal schnitzel only in more expensive restaurants.

The Donuts are only called 'Berliner' or 'Pfannkuchen' in some specific areas. The expression 'Krapfen' is far more common for them. In fact since they are typically filled with a variety of available stuffings, they are closely related to 'Pączkis' of polish origin.

'Pfannkuchen' on the other hand indeed are pancakes everywhere outside of Berlin.

Kartoffelpuffer are not potato dumplings.

You are correct. Error fixed.