This article is brought to you in collaboration with Travelocity to celebrate their biggest sale of the year. 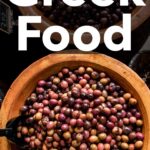 Wondering what to eat in Greece during your first trip to the sunny Hellenic Republic? We spent over a month eating and living like locals in Greece. Read on to find ten must-try Greek food favorites to try during your visit.

With a fascinating history and gorgeous scenery, Greece is a popular destination for both history buffs and honeymooners who flock to the country’s ancient ruins and sandy beaches.

Then there’s us. Our goal when we visited Greece for the first time was to eat the best Greek cuisine.

What’s So Special About Food in Greece?

Blessed by a climate that’s both dry and hot for much of the year, Greece has an abundance of riches when it comes to local food products. And the best part? Food travelers can access all the Greece food favorites at markets and restaurants throughout the country.

When in Greece, food lovers can devour seafood plucked out of the Meditteranean Sea and munch on produce so fresh that eating salads smothered in local olive oil is pure joy. Considering that Greek farmers have been growing olives for thousands of years, it’s no surprise that their olives are among the best in the world.

Then there’s briny feta cheese made with milk from some of the world’s happiest sheep and goats. How could they not be happy grazing on picturesque hills under the baby blue Greek skies and azure blue Mediterranean waters?

For many first time visitors, the many tempting choices on a Greek menu can be overwhelming. However, this challenge is a good problem considering the limits that one person can eat.

We get it. During our initial Greek meal, we were so excited by the local food that we wanted to order an entire restaurant menu until sanity and our belts reigned us in. Luckily, we had over a month to eat lots of traditional Greek food and discover the best food in Greece.

By the end of our trip, we compiled a list of our favorite Greek foods. As you start your own culinary journey in Greece, we recommend you start with the following traditional Greek dishes:

Visiting Greece without eating souvlaki is like visiting London and not eating fish and chips. This is a must-eat Greek food especially for those who want to sample fast food in Greece.

Since souvlaki is readily available at both sidewalk stalls and casual restaurants all over Greece, it’s easy to find the ultimate ‘meat-on-a-stick’ snack food in Athens and on the country’s many islands including Mykonos, Santorini and Rhodes. Some Greek menus list this crowd-pleaser as kalamaki or gyro, but it’s all souvlaki and it’s all good.

Named after a small two-handled frying pan, saganaki is an addictive Greek food that involves melting cheese to crispy perfection. The type of cheese varies by restaurant, with options including graviera, halloumi and feta. Some restaurants in Greece add additional ingredients like tomato, shrimp and mussels, but there’s no shame in eating plain cheese saganaki in Greece.

Regardless of the cheese type or preparation, saganaki is a must-try Greek food in Greece. We first ate saganaki in Meteora and it immediately became a go-to starter throughout the country. Though the preparation of saganaki varied by location during our trip, all versions tasted decadently divine.

Pro Tip
Squeeze fresh lemon juice on top of your saganaki. The juice provides acidity while enhancing the dish’s flavor.

Though baklava may have been invented by the Assyrians during the days of the Ottoman Empire, there’s no debate about its popularity in countries like Greece, Turkey and Romania. Regardless of its origin, it’s fair to say that the Greeks have perfected the process when it comes to baking the sweet, drenched, layered dessert.

Typically baked with 33 layers of phyllo dough, nuts and cinnamon as well as honey or syrup flavored with rose water, Greek baklava is difficult to resist. Between its enticing aroma and rich taste, baklava is easily our favorite dessert in Greece.

Pro Tip
Wash your hands after you eat baklava as the sweet dessert leaves a sticky residue in its wake.

Leave your perceptions about Greek salad at home when you visit Greece. Greek salads known as horiatiki don’t include lettuce. Instead, these rustic salads feature a bounty of local ingredients like tomato, cucumber, onion, feta cheese and olives finished with oregano, salt and olive oil.

In many countries, salads are considered ‘diet’ food for those looking to lose weight. This is not the case in Greece where it’s a pleasure to eat a colorful salad filled with ripe tomatoes, kalamata olives and slabs of briny feta. The best horiatiki salads add paximadia or twice-baked barley rusks similar to crunchy croutons but larger.

Pro Tip
Shop at a Greek market and buy all necessary ingredients to make horiatiki if you’re staying in an apartment. Otherwise, you can order excellent salads at most restaurants in Greece.

Moussaka may be the most popular Greek dish served around the world and with good reason. When served hot out of the oven, moussaka is both comforting and filling.

To prepare moussaka, chefs layer sauteed eggplant and minced meat (traditionally lamb) to create a casserole before adding a top layer of béchamel. Other typical ingredients include tomato, onion, garlic and cinnamon.

After enjoying moussaka at casual eateries known as tavernas, we learned how to make the decadent dish from scratch during a cooking class with Onion Athens. Not only was the class fun, but it also reinforced our appreciation for Greece’s unofficial alternative to lasagna.

Pro Tip
Switch it up and try pastitsio, a Greek dish that’s similar to moussaka but with pasta instead of eggplant.

If you think that donuts are a modern invention, think again.

Greece’s loukoumades dated back to the first Olympics in 776 BC. Though the original loukoumades were enjoyed by ancient athletes, everybody can enjoy them today regardless of athletic ability or lack thereof.

Traditional Greek loukoumades are round balls of golden fried dough flavored with cinnamon and honey syrup. Some people sprinkle powdered sugar on their loukoumades for an extra burst of sweetness, but this is an optional add-on.

Discover more than 100 of the best desserts around the world some of which are also the best donuts in the world.

We first ate loukoumades during an Athens food tour that introduced us to many of the city’s best food vendors. We couldn’t get the memory of these Greek donuts, made with orange blossom honey, out of our head after the tour. We returned to popular local bakery Krivos to eat them again and they were as good as we remembered.

Pro Tip
Add a cup of coffee to your loukoumades to create a quick yet tasty Greek breakfast.

Grilled octopus is not unique to Greece, but the Greeks make a particularly excellent version of it. We ate grilled octopus at neighborhood psarotavernes (fish taverns) and upscale restaurants multiple times over the course of five weeks. Greek renditions of the cephalopod never disappointed us.

Greek restaurants serve octopus on a ‘sea to table’ basis. This is especially the case on Greek islands like Santorini where fishermen capture octopus in the morning and grill the tentacled mollusks later that day.

Pro Tip
Pair octopus with white wine or ouzo. Be sure to exclaim “Yamas” when you clink glasses before your first sip of the iconic Greek drink.

Dining with friends in Greece is often a festive event that starts with a myriad of small plates filled with sauces, dips and olives. We loved these culinary experiences – especially when taramasalata was on the table.

Taramasalata starts with cured fish roe and gets added flavor from ingredients like olive oil and lemon juice. We’ve eaten the creamy, fishy spread in countries like France and Romania, but we ate our favorite taramasalata in Greece. The creamy, salty mezze dish is a Greek classic.

Pro Tip
You can dip fresh vegetables into taramasalata or eat the creamy spread with bread.

Grapes serve multiple purposes in Greece. Not only do vintners create world-class Greek wine from the fruit, but chefs also use the leaves to create dolmades.

Pro Tip
Don’t be confused if you see dolmadakia on a Greek menu. Dolmadakia are just smaller-sized dolmades.

Little cheese pies is a typical Greek food best eaten hot out of the oven. To make them, Greek cooks utilize phyllo dough to create flaky crust and stuff the layered shell with a feta-based filling.

Locals typically eat cheese pies for breakfast or as a pre-lunch snack. During our Greek sojourn, we enjoyed them at various times since Greek vendors sell cheese pies all day long.

Deal Alert
Today is the perfect time to plan a trip to Greece so you can try all the great food yourself. Travelocity has a lot of great deals to this popular summer destination.

Daryl, So happy to be a part of your life AGAIN! You, two, bring a very special feeling to travel plans, and I feel quite proud of you! I also cannot wait to eat in Greece! Keep in touch! Susan Field

Will do and please don't be afraid to ask any questions. We love Greece and hope you have ana amazing time there. Great hearing from you!!

ohh you guys now you leave me craving Greek food!! See you soon in Italy!

I love the greek food, its amazing :D

Om nom nommmm I love Greek food so much! I am a fan of everything you mentioned, but I think my favourite thing is spanikopita... spinach pies make me soo happy. Oh! and super fresh fish!

As you can see, Greek food makes us happy too, especially the amazing seafood.

Everything looks so delicious!! Especially the Dolmades!