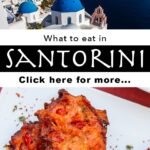 Santorini claims fame more for its epic scenery than for its food but don’t count out the island’s food scene. The key is to know what to eat in Santorini during your visit.

Compared to islands like Crete and Rhodes, the scenic Cyclodian island holds its own in the cuisine realm. Beyond gawking at sweeping caldera views, visitors to Santorini can easily enjoy a full range of must-try traditional Greek food ranging all the way from cheap eats to fine dining.

Classic Greek dishes like souvlaki, moussaka and horiatiki salad are readily available at most Santorini restaurants, but food travelers who crave a deeper culinary experience won’t be disappointed. Santorini’s rocky, volcanic soil creates amazing agricultural products like wine and fresh vegetables that are best sampled at the source.

Without a doubt, the island’s rapid growth in tourism has created agricultural challenges. However, allay your concerns. Santorini has plenty of great food available starting with cherry tomatoes, white aubergine (eggplant) and, of course, magnificent wine.

Discover the best food to eat in Greece.

Most first-time visitors are more focused on researching epic sunset spots instead of researching local Santorini cuisine. If this is your situation, we recommend starting your culinary exploration with a few Santorini food facts and the following dishes and drinks:

Santorini’s tiny tomatoes are intensely packed with sweet flavor due to the island’s dry climate and mineral-rich soil. Local farmers have been growing the little red fruits (or are they vegetables?) since the early 19th century.

Granted PDO (Protected Designation of Origin) status by the European Commission, these petite tomatoes claim a prominent spot in a myriad of dishes on almost every Santorini menu. Many chefs serve the red fruit atop salads while others fry them to make crispy, sweet, melt in your mouth fritters called tomatokeftedes.

Where to Eat Tomatoes in Santorini
If there’s a Santorini restaurant that doesn’t serve sweet local tomatoes in at least one dish, we are yet to find it. In other words, tomatoes are eveywhere in Santorini.

You can eat tomato fritters all over Greece but there’s nothing like eating tomatokeftedes in Santorini, the island where the tangy fried tomato patty was invented. It’s no exaggeration to assert that local cooks channel history every time they fry tomato-infused dough in olive oil. That’s how prevalent tomato fritters are in the Santorini food culture.

Born in poverty ‘back in the day’ when tomatoes were more available than meat, tomatokeftedes are as rich in flavor as they are in history. Beyond tomatoes and olive oil, typical ingredients include mint, onion, parsley and assorted spices.

Where to Eat Tomato Fritters in Santorini
Most local restaurants serve tomatokeftedes. We ate our favorite version at Kokkalo in Fira.

Horiatiki may be an iconic Greek dish as well as one of the most popular global salads , but we never say ‘no’ to Cretan dako salad whenever we see it on a Santorini menu. Typically, restaurants prepare the salad with local tomatoes, feta cheese, black olives, capers, olive oil and oregano.

But barley rusks, crunchy, rustic, crouton-like cubes, are the star of this salad born on the Island of Crete. Not only does the rusk’s double-baked bread add a hefty bready texture to the salad, but the wholesome carb also turns the seemingly simple Greek starter into a miniature meal.

Though fava beans are available all over Greece, Santorini’s variety is so special that the island’s green pods qualify for PDO status. Local restaurants typically purée fava beans into a creamy spread and top the lush concoction with octopus, tomatoes and other local products.

We recommend ordering fava as often as possible in Santorini. It’s a great starter for vegetarians and pescatarians as well as for carnivores like us. If you fall in love with the dish, you can learn to make your own fava at a Santorini cooking class.

Where to Eat Fava in Santorini
Traditional restaurants serve fava all over the island.

As an island in the Aegean Sea, Santorini is literally swimming with seafood. Most restaurants take advantage of this fishy situation by offering seafood options like octopus (chtapódi), prawns (garídes), mussels (mýdia) and fresh Mediterranean fish like red mullet, tuna, seabass and John Dory.

Where to Eat Seafood in Santorini
Though you can find great seafood in most Santorini restaurants, gems like the Ammoudi fish tavern include a coveside sunset view every night.

Since souvlaki is readily available at both sidewalk stalls and casual restaurants all over Greece, it’s easy to find the ultimate ‘meat-on-a-stick’ snack food in Athens and on the country’s many islands including Mykonos, Rhodes and, of course, Santorini. Some Greek menus list this crowd-pleaser as kalamaki or gyro, but it’s all souvlaki and it’s all good.

Read our Athens Souvlaki Guide if your travel plans include Greece’s capital city.

Where to Eat Souvlaki in Santorini
Lucky’s Souvlakis and Pitogyros

Large in size and sparse in seeds, Santorini’s white eggplants (more commonly called aubergine in Europe) are filled with sweet flavor thanks to the island’s rich volcanic soil.

In addition to frying and grilling aubergine, local chefs transform the nightshade into a paste and add it to comforting, cheese-rich saganaki. In case you missed it above, saganaki is a must-eat dish in Santorini.

Where to Eat White Egglplant in Santorini
Traditional restaurants serve white eggplant all over the island.

Brunch is one of our favorite meals of the day whether we’re in Amsterdam, Lisbon or Santorini. Though we didn’t expect to eat American pancakes and Australian avocado toast with a stunning view of the Mediterranean Sea, that’s exactly what we did on our first day in Santorini and every day thereafter at Volkan on the Rocks.

With the addition of specialty coffee made with taf beans from one of the top Athens coffee shops, there’s no other option for us when it comes to eating brunch in Santorini. Done and done.

9. Baklava and Other Pastries

Although baklava was invented in Turkey, you can find excellent versions of it on Greek islands like Santorini. We could have happily eaten the honey sweetened, triangular, layered phyllo pastry every day, but then we would have missed out on other sweet treats like kataifi and kopania

We recommend starting each Santorini morning with a different pastry until you find your favorite. In the heat of the afternoon, you’ll want to satisfy your sweet tooth with gelato at Lolita’s Gelato instead.

Benefitting from the island’s arid climate and volcanic soil, Santorini winemakers excel at growing flavorful grapes like Aidini, Athiri, Mandelaria and, most notably, Assyrtiko. After producing world-class wine with these grapes, they sell bottles around Greece and throughout the world. However, we suspect that the very best Santorini wine stays on the island.

Santorini wineries also produce Vinsanto, a late harvest dessert wine that derives its sweetness from white grapes that are sundried to a golden hue. To create Vinsanto wine, winemakers must use a minimum of 51% Assyrtiko grapes and age the wine for at least two years in oak barrels. The resulting elixir must be 9% abv or higher.

Where to Drink Wine in Santorini
You can sample wine at wineries like Domaine Sigalas, Santo Wines and Venetsanos Winery. Better yet, take a Santorini wine tour.

Donkeys followed us in Santorini. No, not the animals who transport sedentary tourists. We’re talking about bottles of Yellow Donkey beer, Red Donkey beer and Lazy Ass Donkey beer at spots like Dimitris Ammoudi Taverna, To Psaraki and Pitogyros.

A local craft beer since 2011, Santorini Brewing Company’s brews were our beer of choice except when we encountered Volkan Brewery’s award-winning bottles. Talk about a win-win situation when we wanted to beat the heat and drink a tasty tipple.

Hungry for More in Santorini?

Sponsorship
We thank Urban Adventures for hosting us on a four-hour Santorini wine tour to facilitate this and other articles. We otherwise self-funded our trip to Santorini.