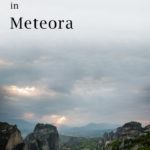 Don’t worry about finding traditional Greek food when you take a Meteora tour in Central Greece. We’ve got you covered with three great Kalambaka restaurants near the ancient city’s holy monasteries.

Meteora is world-famous for its epic rock formations, stunning sunsets and majestic monasteries. Despite the fame that preceded our visit, we were floored as we approached Grecian karst for the first time and saw the Monastery of the Holy Trinity.

Having grown up watching the movie For Your Eyes Only, Daryl immediately recognized the 14th-century monastery perched on a rock formation 400 meters in the air. Meterora can’t get any better than this – or so we thought.

As we soon found out, the unique monastery made famous by James Bond is just the tip of the Meteora iceberg. There are more amazing monasteries in this breathtaking region.

Spoiler Alert: The food is great too.

Meteora exists between heaven and earth.

Located in Thessaly in the center of Greece, Meteora is a popular destination for travelers who seek special sites seeping with history. Since Meteora achieved UNESCO world heritage status in 1988, crowds have flocked to Greece’s most unique landlocked city to explore its rocky cliffs and breathtaking views.

Meteora literally translates to suspended in the air, and that’s how the monasteries appear upon first glance. Without doubt, Meteora’s monasteries are a huge draw to travelers who want to see the amazing clifftop structures with their own eyes.

Six of the 24 Meteora holy monasteries are still functioning places of worship for the Eastern Orthodox religion. For a small fee, travelers can enter each of the six holy structures to pay respect and view the intricately decorated, gilded gold, fresco-adorned interiors.

We visited several magnificent monasteries during a Meteora sunset tour with local tour company Meteora Thrones. Knowledgeable tour guide Christos Zoros brought life to the 60-million-year-old rocks as he shared stories about Meteora’s monasteries and the monks who built them.

We had so much fun on the amazing sunset tour that we woke up the next morning invigorated to take a hiking tour in the countryside. The hike provided us the opportunity to connect with the natural rocks, hills and streams as we ogled numerous views of the majestic, craggy cliffs.

Needless, to say, we worked up a good appetite during our enjoyable Meteora tours with Meteora Thrones.

Just next to Meteora, Kalambaka is a great place to eat traditional Greek food. Unlike the seafood-heavy cuisine found on the Greek isles, Meteora’s central mountain location lends itself to heartier foods like meatballs and stews. Local cooks comply by slow cooking stews and other local food favorites.

Discover the best dishes to eat in Greece.

During our Meteora visit, we indulged in rich, meaty moussaka and ate ‘to die for’ roasted eggplant saganaki. We had previously eaten moussaka in the United States, but the baked saganaki was an oozy revelation. Interestingly, each restaurant made saganaki differently using different preparation methods and cheeses like halloumi and kefalotyri.

We sampled a range of Greek food favorites in Kalambaka. Many dishes featured fresh feta cheese and other local ingredients. The result was a homestyle counterpoint to the more urbane versions of the same Greek food we later enjoyed in Athens.

Not all the food we ate in Kalambaka was heavy. In addition to meats and stews, we ate salads and other vegetarian dishes. But it was Kalambaka’a hearty, slow-cooked food that sated our hunger after a rock hiking energy burn.

Fun Fact
Some people translate Kalambaka to Kalabaka and Kalampaka.

Ironically, Meteora restaurants are not actually in Meteora. Most are located in the nearby town of Kalambaka Greece. If you’re wondering what to eat in Meteora, we recommend the following Kalambaka restaurants:

Meteora Restaurant is a great taverna to start a deep dive into traditional Greek food. The family-run restaurant serves classic dishes as well as slow-cooked stews and casseroles to warm both the heart and soul of a hungry traveler.

Servers brought a procession of plates to our table like floats in a Greek food parade. A range of tasty dishes included saganaki aubergine, veal meatballs, gigantic beans, stuffed eggplant, spanikopita and orange cake. Considering the quality and quantity of food, the check was reasonable – about €20 a person.

Pro Tip
Though you’ll want to sit outside on a pretty day, consider returning in the evening to dine inside the taverna’s dining room where the walls bleed with souvenirs and remembrances from the restaurant’s almost century-long history.

Valia Calda features traditional Greek food cooked with the freshest local ingredients. For our meal, most dishes were served mezze style and celebrated seasonal flavors of the Thessaly region.

The restaurant served homemade spanakopita during our visit, along with a menu that included roast black pig, juicy beef meatballs and breaded feta with walnuts and honey. The food, once again, was big, hearty and satisfying. After a day among the rocks, we needed it.

Pro Tip
Plan to drink wine with your meal. As in the rest of Greece, local wine is reasonable and of high quality.

Located on Kalambaka’s central square, Panellinio is a friendly taverna with a big outside dining area. Over a leisurely lunch, we ate a smorgasbord of Greek classics including pastitsio, stuffed peppers and Horitaki salad.

However, the restaurant’s most famous dish and our favorite was the lamb chops with roast potatoes and rice. This lamb was no refined affair as Panellinion practically charred the thinly cut, heavily seasoned chops.

But this is Greece, not France. Panellinion’s super flavored chops, enhanced by a squeeze of lemon – an omnipresent element in Greek cuisine, tasted like the kind of food which Greek families have been feasting on for centuries.

Now that we’ve convinced you to visit Meteora for the food as well as the scenic beauty, you should start planning a trip of at least two days.

Here are some pertinent tips to assist in your planning process:

If you’re wondering how to get from Athens to Meteora, you can choose from transportation including train, bus or rental car. We took a train and recommend that option for its convenience and cost.

Though some trains have a connection in Paleofarsalos, we recommend taking a direct train from Athens to Kalambaka, the city closest to Meteora. Our train left at 8:20 am and arrived at around 2:00 pm after a typical (for Greece) delay.

When to Visit Meteora

We recommend visiting Meteora during the shoulder seasons of spring and autumn when the weather is pleasant and the crowds are manageable.

Winter in Meteora can be cold and snowy, making touring more difficult especially if you want to hike on trails or climb up to the monasteries. Though summer in Meteora has favorable weather and long days, the popular sites tend to get jam-packed with tourists.

Check out food guides for Athens, Rhodes and Santorini.

Sponsorship
We thank Meteora Thrones for hosting us to facilitate this article.