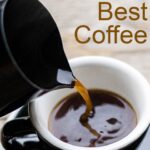 All coffee roads eventually lead to Berlin thanks to a slew of third wave coffee shops percolating in Germany’s capital city. Read on to discover our eight favorite Berlin cafes plus a bonus bakery for drinking specialty coffee and eating sweet treats.

Berlin hit our coffee radar in 2016 when we first encountered beans from The Barn in Lyon, the first international stop during our three-year nomadic stint.

As our travels continued, we kept bumping into The Barn’s beans in cities around Europe. Meanwhile, conversations alerted us to Berlin’s importance in Europe’s emerging craft food movement for both beer and coffee.

It was as if these beans were simultaneously mocking us and enticing us to travel to Berlin. Visiting Hamburg and experiencing that German city’s progressive coffee scene intensified our suspicion that Berlin was a mecca for people who prefer flat whites and filtered coffee over commodity cups of joe.

Finally, four years after we started our nomadic journey that eventually ended in Lisbon, we made it to Berlin. Our mission was to drink as much coffee as possible in a short period of time.

During a highly caffeinated week focused on exploring the Berlin food scene, we drank enough to find coffee to find our eight favorite Berlin cafes.

Berlin staked its claim in the global specialty coffee arena in the early 21st century with a handful of innovative cafes catering to coffee connoisseurs and laptop warriors. Fast forward to the present and dozens of Berlin cafes are riding coffee’s third wave.

While many of Berlin’s best cafes are located in the Kreuzberg and Mitte neighborhoods, most Berliners are rarely far from a good cup of coffee regardless of where they work and live. After eating and drinking our way around both coffee-centric neighborhoods, we’ve narrowed our favorites to these eight Berlin coffee shops:

As self-proclaimed coffee geeks, drinking coffee at The Barn was at the very top of our list of things to do in Berlin. We literally woke up 12 hours after our arrival and hightailed it to The Barn location closest to our hotel. Yes, we’re that obsessed when it comes to coffee.

Though our excitement level was at a fever-pitch high, we wondered if the The Barn would live up to our expectations after its ten years as a leader in the global specialty coffee arena. We’ve been disappointed in the past by famous companies that sold out or grew too large after achieving global acclaim.

Without doubt, The Barn is no longer a small coffee company. Recognized as Europe’s Best Independent Coffee Shop in 2018, The Barn’s staff globally sources and locally roasts beans for its ten Berlin cafes as well as for cafes around the world.

Cutting to the chase, The Barn lived up to our expectations. Baristas were both efficient and friendly as they guided us toward two coffees – a flat white and a filter coffee.

As we watched with anticipation, Camila Conarroe prepared our filtered coffee with an AeroPress while Karolina Galecka decorated our flat white with an iconic heart design. Neither drink disappointed and both motivated us to visit more Barn cafes in Berlin.

And the smell! Since we were at The Barn’s cafe that doubles as a roastery, coffee bean aromas warmly enveloped us as we sipped our first coffees in Berlin.

Ironically, young baristas later rolled their eyes when we mentioned The Barn as we drank our way around Berlin. Let’s face it, a decade is relatively old for a modern coffee operation.

We listened to their opinions but we respectfully disagree. Based on our experience of drinking specialty coffee in four continents and more cities that we can count on all of our fingers and toes, The Barn doesn’t just rank as our favorite Berlin coffee shop. It’s one of our favorites period.

Pro Tip
Expand your coffee horizons by ordering The Barn’s signature drink of the month.

The Barn has multiple Berlin locations. Our favorite is the roastery located at Schönhauser Allee 8, 10119 Berlin, Germany.

We weren’t familiar with Bonanza’s beans prior to our trip to Berlin. We quickly learned to appreciate this prominent roaster that distributes its beans within Berlin and as far away as Asia.

Beating The Barn to the punch by four years, Bonanza has been roasting and brewing specialty coffee in Berlin since 2006. Bonanza earned the second spot in our Berlin coffee guide based on its combination of excellent coffee, pleasing decor and friendly service.

Bonanza has two Berlin locations and we visited both. Located on a residential street, the Oderberger cafe known as Bonanza Coffee Heroes is a comfortable space with white washed wood floors and tables fit for working. After drinking coffee here, we quickly added Bonanza Coffee Roasters in Kreuzberg to our coffee itinerary.

With a window separating the roastery from the cafe, Bonanza’s industrial-chic Kreuzberg location is where coffee magic happens. It’s also a good spot to recharge with a double shot espresso drink during a busy day of touring.

Bonanza has multiple Berlin locations. Our favorite is the roastery lcoated at Adalbertstraße 70, 10999 Berlin, Germany.

Krésten Thøgersen joined the Berlin specialty coffee party in 2015 when he opened Father Carpenter. No stranger to coffee traditions, the Melbourne native has Nordic heritage and a commitment to Berlin.

Coffee drinkers looking for Father Carpenter will need to follow a map closely. Tucked inside a secluded courtyard, centrally located Father Carpenter isn’t readily apparent to the casual walker. However, it’s the kind of cafe that encourages a repeat visit.

Father Carpenter’s space is relatively large, with two distinct spaces – one a cozy cafe space and the other decorated with chipped blue and white tiles and vintage photographs.

Pro Tip
Buy a box of Fjord beans as an edible Berlin souvenir. Each cup of coffee we brewed at home using Fjord’s special peaberry beans brought back fond memories of our time in Berlin.

An independent coffee shop that sources beans from Berlin’s Fjord Coffee Roasters as well as quality roasters like Copenhagen’s Coffee Collective and Barcelona‘s Nomad Coffee Roasters, Distrikt is a neighborhood cafe that we wish was in our neighborhood. No flash in the pan, this cafe has been a favorite with locals since it opened in 2014.

More than just a cozy coffee shop, Distrikt serves a range of beverages as well as a full brunch menu. Food options include perennial favorites like Avocado Toast and French Toast.

Some people come to drink adult beverages including natural wine, crafted cocktails and cold beer. Others come for the food. And then there are digital nomads who come to work on their laptops.

As for us, we originally visited Annelies to drink coffee. Digging the vibe, we returned for a repeat performance. But the second time we added food to our agenda.

Dishes like a Pancake sandwich filled with homemade sausage, cheese, egg and maple syrup did not disappoint while pastries from Albatross Bakery (see below) sealed the deal. We’re nothing if not consistent.

Pro Tip
Explore Kreuzberg after you eat brunch at Annelies. The funky Berlin neighborhood is home to Markthalle Neun as well as a plethora of cafes, shops and bars.

Originally opened as Tres Cabezas in 2002, 19grams is a pioneer in Berlin’s specialty coffee community. Despite its senior status, this Berlin cafe has evolved with the times by changing its name in 2018 and expanding to four locations.

During our visit at 19grams’ centrally located Alexanderplatz cafe, we fueled up with bowls of granola and cups of signature bloody good coffee brewed with 19 grams of house-roasted single-origin beans. Multi-tasking as a roastery and event space, this location is notable for its large windows that allow light to stream into the cafe’s expansive space.

Pro Tip
If you see freshly roasted Geisha beans from Costa Rica, buy a bag to enjoy in your apartment.

19grams has multiple Berlin locations. We visited the cafe at Karl-Liebknecht-Str. 13, 10178 Berlin, Germany

Don’t expect to linger at Concierge Coffee. It’s not that this cafe isn’t warm or inviting. The issue is its dimensions.

Literally 15 square meters (approximately 160 square feet) in size, this gem of a Berlin cafe operates in a space that previously functioned as a concierge house for a box factory. Built in 1909 with a unique set of dark arched tunnels, the building complex carries a historic designation.

Baristas replaced doormen when the cafe opened in 2013. They now serve coffee both inside the tiny cafe and through its window. During our short but sweet visit, we drank flat whites brewed with 20 grams of house-roasted espresso beans. Yes, if this cafe weren’t named Concierge Cafe, it could be named 20grams instead.

Pro Tip
Keep looking if you don’t see Concierge Cafe at first glance. The boutique cafe is hidden behind a Neapolitan pizzeria. Once you find the pizzeria, you’re just steps away from the cafe.
True Confession: We walked into the pizzeria by accident since we didn’t see the hidden cafe.

Open since 2010, Five Elephant is yet another Berlin coffee operation with an international footprint. Not only does the whimsically named cafe source raw beans from countries like Brazil, Colombia, Ethiopia, Guatemala, Kenya and Rwanda, but it also ships its roasted end-product around the world to all countries except Russia, Iran and Saudi Arabia.

Fans of fika won’t want to skip Five Elephant. Despite its Germanic location, this Berlin cafe excels at both aspects of the Scandinavian coffee break tradition by serving tasty cake and brewing excellent coffee. We enjoyed both during our mid-afternoon visit.

Pro Tip
Each Five Elephant cafe is filled with temptations ranging from a colorful rainbow of bagged coffee beans to a glass case filled with cheesecake and other desserts. Consider yourself warned.

After you visit our eight favorites, stop by one or more the following cafes as you wander around Berlin:

While most of the best Berlin cafes serve cakes and croissants to go with their coffee, Albatross Cafe does the opposite. This Berlin cafe serves coffee to go with its desserts.

The Kreuzberg bakery caught our eyes on our first morning in Berlin when we saw Albatross pastries at Bonanza. Just like we kept seeing The Barn’s coffee around the world, we kept encountering Albatross’ baked goods in Berlin at cafes like Annelies, Father Carpenter and 19grams.

Fun Fact
Albatross Bakery has spread its wings to Copenhagen. In 2022, the bakery opened an outpost called Albatross & Venner.

Not wanting to experience the dreaded FOMO (fear of missing out), we squeaked in a visit to Albatross on our last day in Berlin. As we drank coffee brewed with beans locally sourced from Vote Coffee Roastery and nibbled on moist cake, we started plotting our eventual return to Berlin, a city as obsessed with coffee as we are.

Pro Tip
Consider eating lunch at Albatross whether you’re a vegan or carnivore. The cafe’s menu includes reasonably priced sandwiches as well as specials like tartines and brunch bowls.

Thirsty for More Coffee in Europe?