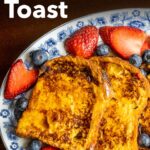 Brioche French Toast is wonderful for brunch whether you’re hosting a group or sharing the morning with one special person. And the best part? Adding fresh fruit and maple syrup turns this brunch dish into a brunch party on a plate.

If there was an olympic style podium for world champion brunch dish, Pancakes, Omelets and French Toast would be vying for gold, silver and bronze. Where each dish ultimately placed would be a game day decision based on performance and the judges’ whims.

Just like those judges, our preference for these three iconic brunch dishes depends on our moods. Lately, however, French Toast has become one of our favorite mid-day brunch treats. Though, for better and worse, not all French Toast versions are equal in concept and execution.

We’ve made this observation after eating a lot of French Toast, from great to mediocre, all over the world in cities that include Amsterdam, Athens, Buffalo, Lisbon, Lyon and New Orleans. And not just traditional French Toast. We’ve eaten interpretations of the adopted Gallic food favorite that include versions stuffed with cheese, “Monte Christo” sandwiches, white toast simply dipped in egg and our favorite – French Toast with brioche bread.

Not every version of French Toast that we’ve eaten would win the gold or even silver. We’ve made it our mission to create a version that wins the top prize each and every time.

The French Connection to French Toast

Food historians trace the concept of macerating bread back thousands of years. In those early days, cooks would soak scraps of bread in eggs and fry them in oil. Later, the French refined the concept by removing the crust off of stale bread, soaking their scraps in a milk and egg liquid before cooking them. That iconic French dish is known today as Pain Perdu which literally translates to lost bread.

While there’s no definitive explanation as to how and why Pain Perdu assumed the name French Toast in America, we assume that the name was given in tribute to the cooking process that the French developed. However, in our opinion, Pain Perdu and French Toast are different dishes. Hear us out…

During our 2012 visit to the French Alps, we enjoyed a dessert of Pain Perdu made with individual slices of bread and topped with a mountain of red fruit. But, when we recently ordered Pain Perdu at a Lyon bouchon, we received something that was more like American bread pudding. In fact, Daryl ‘schooled’ the Lyonnais server regarding the translation, much to Mindi’s embarrassment.

So while the differences between Pain Perdu and French Toast may be technically slight, the open plating style and whole slices of bread used to prepare French Toast can, in some cases, make the American dish significantly different.

That being said, Americans can soak bread in one of France’s great sweet sauces, Crème Anglaise, to make killer French Toast. As for us, we go to the next level by using high quality brioche bread and whole vanilla beans in our recipe.

Although the ingredients to make Brioche French Toast are fairly simple, you’ll want to start gathering them about a day ahead. You can make some substitutions but, as usual, what you put in is what you get out of this recipe.

Pro Tip
You likely have all or most of the ingredients in your pantry. If not, you should be able to find them at your local market.

We live in Lisbon which gives us ample access to high-quality European bread. However, good brioche should be readily available in most major American cities and even some smaller towns.

You can alternatively use Jewish Challah or another egg-based bread as a substitute. You could hypothetically bake brioche at home but, be forewarned, it can be a lengthy process that requires multiple risings to get right.

Pro Tip
Slice the brioche about ¾ of an inch thick and let the slices sit in the open air to get stale for one to two days maximum. One full day is optimal.

You should use the freshest eggs available.

In Europe, the egg yolks in our eggs have a bright orange hue. If you can buy similar eggs at a market where you live, go for it. However, grade A large supermarket eggs work just fine in this recipe.

We use whole milk in this recipe. You can use 2% milk; however, your final product won’t be as tasty or rich.

Pro Tip
Skip skim or 1% milk. The final result will simply disappoint you.

We don’t know why most French Toast recipes, including ours, require cream in addition to milk. Maybe it’s to keep the French Toast from becoming too eggy? We’re not really sure why but we do know that the end result is delicious so we’re okay with that.

Pro Tip
In the absence of cream, you could substitute an extra egg yolk.

Pro Tip
You can substitute 1/2 teaspoon of vanilla extract if you don’t have or choose not to use a vanilla bean.

While it’s possible to add cinnamon to our French Toast mix, we chose not to because we want the vanilla flavor to be unadulterated. You can add a ½ teaspoon of cinnamon if you prefer your French Toast to have a cinnamon accent.

Buy vanilla beans from Amazon for this and other recipes.

We use dark brown sugar in this recipe. While you certainly could use granulated white sugar instead, we find that brown sugar provides a richer flavor.

As with most sweet dishes, salt provides a certain level of seasoning that amplifies the other flavors in the dish. A pinch should be more than enough in this recipe.

We cook our Brioche French Toast in butter for maximum browning and ultimate flavor. You can use other fats like vegetable oil but the flavor just won’t be the same.

Typically produced in Vermont and Canada, maple syrup is a product usually served with Pancakes, French Toast and Waffles. Accordingly, it should be no surprise that we use maple syrup to finish our Brioche French Toast recipe.

We like to use amber Grade A maple syrup in this and other recipes. Canadian cities like Montreal sell the sweet elixir in cans at local markets. In Lisbon, we consider ourselves lucky to have found bottles of Canadian maple syrup at a nearby grocery store.

How to Make Brioche French Toast

If you’re looking to exercise your culinary chops, then this recipe is the way to do it. Too low a fire will result in an overly, custardy undercooked mess. Too high a fire and you’ll end up with charred brunch.

There are two cooking surfaces we recommend for beautifully done Brioche French Toast – an electric griddle or a cast iron pan. We’re lucky enough to have an antique 10” cast iron skillet and, after a little practice, the pan does a beautiful job. We like to cover our Brioche French Toast with a lid while cooking it so that the radiant heat cooks the bread all the way through.

Pro Tip
While we provide cooking guidelines in this recipe, the heat of every stove varies as does the conductivity and insulation of every cooking surface. You may need to do some trial and error with your specific kitchen tools.

We’ve found that it’s important to have a nonstick surface. The last thing you want is for your eggy, sugary toast to stick to the pan. A well seasoned cast iron skillet accomplishes this feat wonderfully.

It’s also important to make sure that your pan is well heated. You may find that the butter will sizzle quite a bit when added to the pan. But, once you add the brioche, you’ll want to crank the heat a bit as to not allow the cooking surface to become too cold. This step will ensure even browning.

Heat your pan on the stove for about 5 to 10 minutes on medium.

Without any solution in it like butter or water, with a little time, your pan will become very hot.

We recommend medium heat to give you room to increase the heat after you add the toast.

Meanwhile, while the pan is heating, make a milk/egg solution.

Our milk/egg solution is fairly similar to Crème Anglaise. We make it with a ratio of one cup of liquid for every two ounces of fat.

In this recipe, we use three eggs plus one tablespoon of heavy cream per one cup of whole milk. To be clear, we use two whole eggs and one egg yolk.

Mix your egg/milk solution in a pan large enough to fit at least two slices of bread. Once you’ve broken and separated the eggs, add them, along with milk, cream, sugar and salt, to the pan.

Split the vanilla bean and scrape out the beans with a paring knife. Add the beans and the vanilla pod to the pan. Mix the solution thoroughly.

Once your solution is mixed, add the stale brioche slices. You only want them to soak for two minutes total on each side. If you soak them longer, the toast may break, fall apart and become too soggy.

Melt your butter in the pan. It will sizzle quickly, so be ready to add the soaked bread immediately.

Add the bread to the pan and crank up the heat to medium high. Cover the pot and cook for about two minutes on each side until the toast is golden brown.

Serve by drizzling the Brioche French Toast with a liberal amount of maple syrup and top with strawberries, blueberries and/or bananas unless you’d rather use other fresh fruit. Feel free to sprinkle powdered sugar or add whipped cream if you have a sweet tooth.

Pro Tip
Use your prettiest serving plate. After all, brunch is the best meal of the week.

You should have enough Brioche French Toast to feed six people. Otherwise, plan to enjoy leftover French Toast which you can freeze and reheat in the oven.

Great recipe and really a nice one. Will surely try this