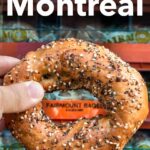 Are you wondering what to eat in Montreal during your first visit to Quebec’s cosmopolitan city? Read on to discover ten must-eat Montreal food favorites that you simply should not miss during your Canadian adventure.

Montreal is a fabulous destination for travelers wanting to explore a unique culture within North America. Less than 400 miles north of New York City, the Quebecois island city is notable for its stylish architecture, funky street art and friendly populace.

Leonard Cohen’s home city oozes with culture at intimate music clubs as well as at world-class museums like the Musée des Beaux-Arts de Montreal and Musée d’Art Contemporain de Montreal. However, in our opinion, the best reason to visit Montreal is to eat the food.

Montreal’s vibrant culinary scene surprises and delights us every time we visit. Not only do local restaurants serve poutine on a 24/7 base, but they also serve cuisine inspired by the cuisine in countries like Portugal, Italy and France.

From open-air markets selling all forms of maple syrup to upscale restaurants pushing the culinary envelope, the Montreal food scene is both comfortably familiar and exuberantly alive. Accordingly, the choices can be overwhelming.

The good news is that it’s easy to eat well in this global food city. We recommend that you start your culinary exploration with the following Montreal food favorites:

Invented in Quebec and popular throughout Canada, poutine is the number one food to eat in Montreal. This unique comfort food is difficult to resist with its mish-mash of french fries, cheese curds and brown gravy. Poutine is a dish where the ingredients are better together than on their own.

Montreal restaurants outdo each other in their quest for poutine perfection. Some like La Banquise are open all day every day and offer multiple variations on the menu. Others like Patati Patata add hot dogs and olives to the mix. And then there’s Au Pied de Cochon which tops poutine with decadent foie gras.

You won’t have to look hard to find poutine in Montreal since the dish is prominently featured on menus throughout the city. Order poutine as often and at as many restaurants as possible so you can find your favorite version. It’s a dish that you’ll miss when you leave Montreal.

Montreal can’t take credit for inventing the bagel. That credit goes to Poland. However, Montreal can proudly claim the world-famous Montreal-style bagel as its own.

Make no mistake – Montreal bagels are different from their New York cousins. They’re smaller and have a sweet flavor due to a cooking process that includes a water and honey bath.

Popularized by Jewish immigrants from Eastern European countries like the aforementioned Poland, Montreal bagels are unique for their sweet flavor and crunchy texture. The sweetness comes from honey added to the water and the crunchiness from wood ovens used to baked the bagels.

If you’re wondering how Montreal bagels compare to their bigger brothers in New York City, you’ll have to taste test a few to decide. We recommend trying sesame bagels with a cream cheese schmear at both Fairmount Bagel and St-Viateur Bagel Shop. If you can’t wait, you can order Montreal bagels from Goldbelly and eat them sooner than later.

One of the best sandwiches in the world, Montreal’s smoked meat tradition originated with Eastern European Jews who brought the recipe when they immigrated from countries like Lithuania. This cured and smoked beef brisket is similar to New York’s pastrami, but the Montreal version has a more peppery flavor.

Various Montreal delis serve smoked meat but none are more famous than Schwartz’s Deli. Opened by Reuben Schwartz in 1928, Schwartz’s attracts crowds that queue for sandwiches seven days a week. Most dine in the restaurant, while others take their meaty sandwiches away to nosh on later.

Don’t hesitate to join the queue at Schwartz’s. Be sure to specify your desired fat level from lean to fatty and get extra rye bread if you’re sharing. After you add mustard, simply bite in and enjoy.

Insider Tip: We typically order one ‘medium fat’ smoked meat sandwich to share and add sides like pickles and fries.

Where to Eat Smoked Meat in Montreal
Schwartz’s Deli

Eating chicken in Montreal is the opposite of boring. Local restaurants elevate the humble bird by channeling flavors from diverse countries like Portugal, Jamaica and Pakistan. Some serve whole roasted chickens, while others shred the meat and serve it atop poutine.

Try chicken at various Montreal restaurants at all price points to find your favorite. We recommend starting at the city’s many Portuguese eateries and then expanding your poultry horizons to other global cuisines.

Multi-taskers can combine a burger break and a market visit with stops at Chez Tousignant and Marché Jean-Talon. Open since 2015, the local joint serves classic burgers on house-made buns.

Stop at Uniburger if one burger isn’t enough. Honored in 2019 for making the best burger in all of Canada, the team at Uniburger imports potato buns for their winning burgers.

Where to Eat Burgers in Montreal
Chez Tousignant and Uniburger

The Wilensky’s Special is far from a hidden gem. The family-run luncheonette has been grilling ‘all beef salami with all-beef baloney” sandwiches for decades.

Moe Wilensky opened Wilensky’s Light Lunch in 1932 and later invented the iconic Montreal sandwich. His children and grandchildren have continued the tradition at the Mile End eatery.

Not only is this sandwich the thing to order at Wilensky’s but it’s also a must-eat Montreal food pick. Grab a stool and order a Wilensky’s Special with either Swiss or American cheese.

You don’t have to specify mustard since the yellow condiment is automatically included. Add a handcrafted soda to achieve full satisfaction.

When deciding whether or not to do brunch in Montreal, the answer is always yes. Quebec’s largest city has fully embraced the weekend mid-day meal at restaurants all over town.

You can easily find fun brunch options like dim sum and vegan food in Montreal. However, dozens of restaurants like Beauty’s Luncheonette and Larry’s serve traditional brunch comfort foods like pancakes and omelets.

Despite a distance of 3,000+ miles between the two cities, Montreal and Paris have certain similarities. One is the French language. Another is the classic bistro.

For those unfamiliar with the dining concept, bistros are casual restaurants that serve French food at moderate prices. In terms of menu items, think Cassoulet, Salade Nicoise and French Onion Soup. Our favorite Montreal bistro is L’Express.

When you dine at L’Express, plan to wash classic bistro fare like Steak Frites and Bone Marrow down with glasses of French wine. L’Express is far from the only bistro in Montreal, but it’s the one that transports us to our happy place across the ocean.

Where to Eat Bistro Fare in Montreal
L’Express

Some of the best dishes around the world started out in poverty – Cholent in Budapest and Scrapple in Philadelphia just to name a couple. Pouding Chomeur is one of these dishes.

Discover more than 100 of the best desserts around the world.

With a name that translates to unemployed man’s pudding, Pouding Chomeur is a decadent dessert made with familiar ingredients (i.e. flour, butter, eggs, sugar, cream and maple syrup) found in a typical Quebec kitchen.

Order your Pouding Choumeur wisely and savor every bite. We recommend a visit to Au Pied de Cochon where you can end an epic meal with this must-eat Montreal dessert. Or, if you’re like us, you can return to Martin Picard’s restaurant for a repeat dessert performance. It’s that good.

If Forrest Gump is correct in his cinematic proclamation that life is like a box of chocolates, then life in Montreal is both full and tasty. With access to a myriad of purveyors selling chocolate in every form both liquid and solid, Montrealers are never far away from their next chocolate treat.

You can indulge your chocolate passion from bars to cocoa and everything in between in Montreal. We recommend chocolate-fueled breaks at tiny Les Chocolats de Chloé for fruit-filled truffles and popular Juliet et Chocolat for fondue.

What is Montreal famous for in terms of food?

Montreal is famous for its Poutine, Bagels and Smoked Meat Sandwiches.

Is tipping necessary in Montreal?

Yes. The standard tip at Montreal restaurants is 15-20%.

Is food in Montreal expensive?

Food in Montreal ranges from cheap eats to fine dining. In other words, you can eat for under $50 a day or blow it out and spend much more on fine dining experiences. As a bonus, the exchange rate is typically favorable for American travelers.

Where did Anthony Bourdain eat in Montreal?

Where did Phil Rosenthal eat in Montreal?

What time do people eat dinner in Montreal?

People typically eat dinner between 7pm and 9pm in Montreal.

Are restaurant reservations necessary in Montreal?

Hungry for More in Montreal?

Eat at these 10 iconic restaurants in Montreal.