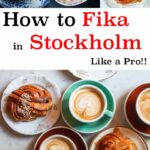 We fully embraced the Stockholm fika culture when we visited Sweden. Once you understand fika, you’ll surely love this Swedish concept too.

Summer is the perfect time to visit Stockholm Sweden.

Stockholm summer days are so long that they’re practically endless, with beautiful fiery sunsets that last for hours while orange and pink hues dance throughout the skyscape. Residents take it to the streets where they enjoy the city’s many public outdoor spaces and the numerous korv or sausage stands that sell hot dogs throughout the city.

Plus, longer Scandinavian days mean more time to drink all sorts of beverages, especially coffee. There’s no getting around it – the Swedes drink a lot of coffee.

We’re not complaining. Not only do we love pretty sunsets, but we also have a thing for coffee.

Ironically, neither of us much liked coffee when we were young, and one of us (Daryl) never drank it before we met. That all changed when we drank third wave coffee in New York several years ago in an effort to stay up all night for a crack-of-dawn flight. With that well-crafted coffee, our coffee obsession was born.

Fast forward to the present – as we’re now married for twelve years and living in Lisbon – coffee plays a big role in our lives. We always scope out the best coffee shops to drink and work when we arrive in a new city.

Sometimes we have great success in cities like Seattle and Cape Town. Other cities like Napoli pose more of a challenge since Naples cafes lend themselves more to mobility than to tertiary enjoyment. And then there’s Stockholm – the Swedish capital city where the coffee flows and fika is a way of life.

In Stockholm, like the rest of Sweden, fika is a simple coffee break yet so much more. You can enjoy fika at cafes throughout the Swedish capital as well as in the nearby Sormland region.

To fika is to take a break from the daily grind and relax with a cup of coffee and a sweet treat. It’s also the time to chat about last night’s TV show or share some of the latest juicy gossip among friends or coworkers. Time of day doesn’t matter, though most people prefer to get their caffeine fix earlier in the day.

People fika at home or at work, though coffee shops have become a popular fika destination in recent years. At the end of the day, where you fika doesn’t matter so long as you fika. And yes, the word fika can be used as a noun or verb in a sentence.

The people in Sweden may not drink the most coffee in the world – that honor goes to Finland as we learned when we were in Helsinki. However, it’s fair to say that the Swedes drink coffee best.

Fun Fact
If you like the concept of fika, then you’ll probably love the concept of lagom. In Sweden, people don’t need to have it all – they just need enough to be happy. In other words, they want lagom. In our opinion, the world would be a better place if every country strived for lagom.

What to Eat When You Fika

It goes without saying that a good cup of coffee is a necessity for the best fika Stockholm experience; however, the sweet treat is equally as important. When you go to a Stockholm cafe, be sure to try a bulle, a buttery, knotted Swedish pastry that is similar to an American cinnamon roll but smaller and supposedly healthier.

Better yet, try multiple bullar (the plural for bulle) and make sure that one of them is a cardamom bulle. Cardamom is not typical in American pastries, but its slight anise flavor adds a fun dimension of flavor to the everyday pastry.

Pretty much every Stockholm coffee shop sells kanelbullar, which are bullar topped with sugar nibs. Cookies and cakes are also popular fika treats. Ironically, we ate the jam centered fika cookies pictured above in Malmö , a coastal city located on Sweden’s southern tip.

Pro Tip
Sweden has celebrated Skanelbullens Dag or Cinnamon Bun Day on October 4th each year since 1999. It’s not too soon to investigate the best Stockholm hotels available during this sweet celebration.

Considering its population of 1.5 million residents, Stockholm has more than its fair share of coffee shops. And we’re not talking barebone bars that sell coffee as an afterthought. Stockholm oozes with style and design everywhere.

Not surprisingly, Stockholm fika cafes are stylish and cool with modern lighting fixtures, comfortable pillow appointed benches and outdoor seating in rainbow colors. It’s like being in an IKEA store on steroids.

We hit several of the best cafes in Stockholm as we embraced the fika culture with open arms. The following cafes get our votes for the best place for fika in Stockholm:

We first discovered Fabrique while we were walking through the Stockholm Central Railway Station. We didn’t know the concept of fika yet, but we knew good bullar when we smelled them. Seriously, the aromas of cinnamon and cardamom literally wafted through the air as we walked by Fabrique in the busy train station corridor.

Of course, we had to stop and try the pastries for ourselves. This is when and where we ate our first cardamom bulle, but not our last.

By the time we wandered into Fabrique Stenungsbageri in trendy Södermalm, we were Stockholm fika experts. We loved the cozy cafe’s layout with its big windows and open kitchen.

Although a local chain, Fabrique serves all the ingredients for a quality Swedish fika experience starting with a variety of espresso drinks and ending with delectable pastries. As a bonus, you can take some freshly baked bread home to enjoy later. At least that’s what we did.

For those who like to fika in style, Johan & Nyström is a perfect choice – especially in the summer. This Södermalm cafe looks like a magazine ad for Scandinavian design with its sleek lines and functional decor, but the appearance is only part of the story.

The Johan & Nyström cafe is a comfortable space for enjoying well-crafted third wave coffee drinks ranging from cappuccinos to iced lattes and everything in between. The pastry selection is varied, though we’re partial to the cardamom bullar.

Though the cafe has ample space inside to fika with friends, the colorful outside area is ideal for Stockholm’s long summer days. The folks at Johan & Nyström roast their own beans, making this Stockholm coffee shop more than just a pretty face.

Hidden on a side street, down a flight of stairs from Regeringsgatan, Snickarbacken 7 caught our attention thanks to its fun name. Can you blame us? It turns out that this cafe was set in an artfully decorated yet minimalistic space inside a 19th-century building.

In addition to its uber-cool vibe, Snickarbacken 7 served top-notch coffee, juice and cafe food, as well as art and gift items. With beans procured from local Stockholm Roast, the Snickarbacken 7 baristas brewed up coffees that met our high standards.

...ok, I didn't giggle until the 'what to eat when you fika', then, in effect... (in Italian, 'fica' is, well, a wonderful part of female anatomy. So top Stockholm fi(c)a locations', or fully embracing fi(c) culture....)

Your post brought me right back to one of my favorite cities!! While I drank plenty of coffee and had far too many pastries, I didn't realize that "fika" was the term to call this. I haven't been in the summer, but going in the chilly winter nothing was better than popping into a nice little cafe to take a break and warm up a bit - fika!

You were a fika pro and didn't even know it!

Fika is definitely my thing! :) Those pastries look very tempting!

I like to fika all day long! ;) You guys sure know where to find an awesome cup of coffee. The pastries look amazing, too, especially the jelly topped cookies.

This is 100% my speed :-D I could use a fika right now! Throughout our travels in Europe, I've really loved the culture of taking some time in the day to relax and socialize over a cup of coffee.