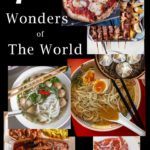 As full-time food travelers, we no longer collect souvenirs. Instead, we collect experiences. Check out our favorite food experiences, i.e. our seven wonders of the world, so far.

When you think about it, the bucket list concept is nothing new.

Over 2,000 years ago, the ancient Greeks created the first aspirational travel list highlighting the seven wonders of the ancient world. Though six of the original seven wonders no longer exist, the concept (as well as the Great Pyramid of Giza) has survived to this day.

Fast forward to this century – 100 million votes were tallied to select seven modern wonders of the world. We’ve been to four of the winners – the Great Wall of China, Petra, the Colosseum and the Taj Mahal. Eventually, we’ll make it to the remaining three – Chichen Itza, Machu Picchu and Christ the Redeemer – though it’s not our top priority.

Unlike many, we travel in a quest to experience the world’s most special food. Yes, we select destinations because of food. To us, great food is nothing short of wonderful and well worth the price of a plane ticket.

Our Seven Wonders of the World

Traveling for food has allowed us to explore some of the world’s most famous sites like the Great Wall of China. These sites are a bonus since our main travel goal is to eat the world’s best food.

This mission is not yet complete since there is global food favorites that we have yet to eat. For now, these are the seven food wonders of the world that have tickled our taste buds the most:

How much do we love Neopolitan Pizza? Enough that we spent a month in Naples primarily to eat as much pizza as possible.

And the kicker? We never got bored or sick of pizza in Naples. It’s one of our favorite things to eat in all of Italy and that’s saying a lot.

Made from tomatoes grown on the volcanic hills of nearby Vesuvius and dough that’s slowly and patiently developed to create a heavenly subtle texture, Neopolitan pizza is the best pizza we’ve ever eaten.

Sure, travelers can eat pizza around the world from Cape Town to New York to Bucharest; however, you need to go to Naples for the world’s most classic pies. After all, this is the city that invented Margherita pizza and still does it to perfection.

During our month in Naples, we made a pilgrimage to rural Campania to dine at Pepe in Grani, the famed pizzeria in Caiazzo, where we sampled what many people (including us) consider to be the best pizza in the world. Talk about a true wonder!

Vietnam keeps drawing us back for many reasons and Pho is at the very top of the list.

Travelers can eat Pho all over Vietnam and at all hours of the day. As for us, our favorite Pho city is Hanoi and our favorite time of day is breakfast.

Compared to sweet broths found in Saigon and Central Vietnam, Hanoi Pho has a savory flavor profile that features lemongrass and star anise. Hanoians serve this heaven in a bowl with a simpler set of accouterments like fresh herbs and fresh red chiles.

Eating Pho in the morning is not a touristic thing to do in Hanoi. Locals fill cafes, sitting cheek to jowl on little plastic chairs, as they slurp down big bowls of broth, noodles and herbs. Meat options are beef (Pho Bo) or chicken (Pho Ga).

Pho has origins linking back to both France (the broth) and China (the noodles) but the soup is a true Vietnamese food classic. One bowl makes a flight worth the expense for dedicated food travelers.

Japan is like another planet with its modern take on life, technology and food. We were dazzled during our first trip to Tokyo and Kyoto, and we’re still amazed after subsequent trips to Osaka, Naha, Fukuoka and Nagasaki.

Though we love to eat Japanese classics like Sushi and Yakitori, we can never get enough Ramen when we’re in Japan. We’ve eaten ramen in cities as varied as Budapest and New York, but Japan makes it best with fresh al dente noodles, melt-in-your-mouth chashu pork, bright orange-yolked, pillowy soft boiled eggs and fatty, pork-infused tonkatsu broth.

In a country with stern, strict food traditions, ramen cooking is more of a free-form exercise. As a result, travelers can find different riffs on the heavenly noodle concoction in ramen shops across Japan from Fukuoka to Hokkaido.

We can’t pick one city for the best Ramen since we’ve eaten great Ramen all over Japan. That’s the thing about Japan – when they do something well, they do it really well. Ramen is no exception to this rule.

With just four days in China at the end of an epic Asia cruise, we had one goal and one goal only – to eat as many Soup Dumplings in Shanghai as possible. To nobody’s surprise, we met our goal with flying colors.

Though Soup Dumplings were invented in the Nanxiang suburb of Shanghai, they are now available in Chinatowns around the world. In fact, we’ve eaten them in cities like Taipei (home of global Soup Dumpling chain Din Tai Fung), Toronto and Philadelphia.

However, there’s nothing like sucking the rich soup out of handmade Soup Dumplings in Shanghai. The experience is a top culinary wonder of the world.

We suspected that we would enjoy Greek food in Athens and we were absolutely correct. From Horitaki (Greek Salad) to Baklava, we loved it all but none more than we loved Souvlaki.

Many consider Souvlaki to be a street food even though it’s available at tavernas throughout Greece. When done right and served with fried potatoes (i.e. French Fries), Souvlaki is a magical dish. There’s nothing like the flavor of meat after it’s been marinated and grilled over charcoal.

Depending on the vendor, Greeks refer to Souvlaki as Kalamaki (typically on skewers) and Gyros (which are cooked similar to middle eastern Shwarma and served typically in pita). Whatever the name or serving vessel, Souvlaki always has small pieces of grilled lamb, pork, chicken or vegetables.

We adored Greek Souvlaki so much that we produced a YouTube video with our ten favorite Souvlaki shops in Athens. We like to think of them as the ten souvlaki wonders of Greece.

6. Barbecue in the United States

There’s something about meat cooked on an open flame that brings out the deep carnivores in our souls. Is it the deep complexity of flavors that develop or the meaty aroma that gets us? The answer is yes.

Although the United States is most famous for its Barbecue, American-style Barbecue is available around the world in cities like Helsinki, Paris and Da Nang. Regardless of the far-flung locations, common threads include low and slow cooking as well as simple ingredients like meat, salt and pepper (Texas BBQ) or tangy sauces over meltingly smoked meat (Memphis BBQ).

As Americans, we’re proud to claim the world’s best barbecue in cities like Memphis and Lockhart. These two cities take barbecue to otherworldly levels, making a barbecue road trip more of a necessity than a whim.

Spain is a popular food travel destination for food lovers due to its plethora of wonderful meat, cheese and wine. For us, though, the top draw is Jamon Iberico, a cured ham made from Black Pigs or Pata Negra.

Food travelers must try Jamon Iberico Bellota made from black pigs fed exclusively on acorns. This diet gives the meat both a distinctive nutty flavor and a buttery, fatty texture.

Spanish shops sell big sides of Jamon Iberico as well as smaller servings. However, the easiest and most fun way to enjoy the special meat is over Tapas with friends.

We ate more than our share of Jamon Iberico during trips to Girona and Barcelona, and we plan to do the same in Madrid and San Sebastian in the future. This is a world wonder that we look forward to repeating again and again.

Experience Your 7 Wonders of the World

Exodus Travels ran an exciting contest that is now closed. You can sign up for their newsletter to learn about future contests and special events.

Sponsorship
We thank Exodus Travels for sponsoring this in collaboration with their My 7 World Wonders initiative.