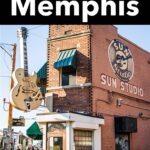 Tennessee’s second biggest city, Memphis is a wonderful destination for history hounds, music mavens and food fanatics. Read on to discover our favorite things to do in Memphis.

Considering its population of 650,000 (give or take), Memphis has a wealth of attractions that rivals bigger cities within the United States. While these attractions are fun, many double as deeply emotional and/or educational experiences.

Travelers can easily spend a week exploring the city’s musical heritage and civil rights past while checking out fun spots like the zoo, art museum, and Bass Pro Pyramid. They can also eat a prodigious amount of American food favorites like barbecue and fried chicken.

This is a city where Martin Luther King and Elvis Presley both made history that’s commemorated and celebrated inside museums and on colorful street art murals. It’s a city where soul is a key component in both food and music. It’s also a city that’s practically impossible to resist.

Our Picks for the Best Things To in Memphis Tennessee

You might think that eating was our favorite thing to do in Memphis but you’d be wrong. We loved eating at the city’s best barbecue joints and restaurants. However, we loved visiting the top Memphis attractions and listening to Memphis music just as much and maybe more.

If you have just a few days and you’re wondering what to do in Memphis, we recommend starting with the following meaningful activities:

1. Expand Your Mind at the National Civil Rights Museum

More than an homage to Martin Luther King, the National Civil Rights Museum traces the American civil rights movement all the way back to the beginning of slavery with moving multi-media exhibits. But it’s impossible to forget Martin Luther King since the museum is literally located at the motel where he was spent his last night.

In many ways, being in Memphis is a reminder of the impact that Martin Luther King made on the country. Though he lived in Atlanta, he will always be connected to Memphis because of the circumstances of his passing, his final “I’ve Been to the Mountaintop” speech and his participation in Memphis’ ‘I Am a Man’ sanitation worker demonstrations.

Experiencing this museum is an absolute must, especially if you’re traveling with children. Budget adequate time. You’ll need at least two hours to read everything while absorbing the moving history of the never-ending struggle for equality.

Pro Tip
You can buy tickets at the museum.

2. Get Your Groove on at the Stax Museum of American Soul Museum

Built in the Soulsville neighborhood at the former Stax Records site, the Stax Museum of American Soul Music provides a fascinating overview of American soul music in general and the record company’s role in the musical genre in particular.

Brother and sister duo Jim Stewart and Estelle Axton founded the label in 1957 and recorded legends like Rufus & Carla Thomas, Otis Redding, Booker T. & The MGs and the Mar-Keys over the next decade. Due to changes in the industry, Stax Records ceased operations in 1975.

Tours provide an interactive education about soul music and its ties to both Memphis and the civil rights movement. Expect to see unique artifacts like Isaac Hayes’ gold-plated Cadillac El Dorado and the Soul Train dance floor when you visit the museum. If so inclined, you can bust a move or two on that famous floor.

Pro Tip
Plan to spend about an hour at the Stax Museum. You can buy tickets at the museum or click here to buy advance tickets.

3. Go Back in Time at Sun Studio

Touring Sun Studio provides another glimpse into Memphis’ musical past. Nicknamed The Birthplace of Rock and Roll, this is the studio where Elvis recorded his first songs. The studio also recorded legendary luminaries including B.B. King, Johnny Cash, Jerry Lee Lewis and Roy Orbison.

Ticket admission includes a 45-minute guided tour that outlines Sun’s musical history and culminates in the studio where Elvis recorded his first songs. Expect to hear stories about Elvis and the other notable singers who recorded here.

Inspired visitors can stand in the exact spot where Elvis recorded his first songs. Don’t be surprised if you feel emotional – our tour guide shared that Bob Dylan was particularly moved by the experience.

Pro Tip
You can buy tickets at the museum or click here to buy advance tickets.

4. Make a Pilgrimage to Graceland

Most Memphis visitors feel compelled to visit Graceland, the opulent mansion that Elvis Presley called home and immortalized in Paul Simon’s 1986 album. We were no exception.

Though he died in 1977, Elvis’ music and persona continue to impact American pop culture decades later. He’s both a legend and an icon. His Memphis mansion must be seen to be believed.

Touring the inside of Graceland is a trip. Elvis had an interesting sense of style and wasn’t afraid to go big with his design choices. We especially enjoyed seeing his entertainment rooms both for their design elements and for the trip they took us down memory lane.

Since tickets to Graceland aren’t cheap, you might as well go whole hog and get a ticket that includes access to the estate’s full grounds. You’ll want to see Elvis’ cars, outfits, airplanes and more while you’re at Graceland.

Expect an experience that’s both kitschy and touristic. You’ll be surrounded by crowds and end up in a huge gift shop. Go anyway. Visiting Graceland is a once-in-a-lifetime experience that you can only do in Memphis.

Pro Tip
You can join the queue for tickets or click here to buy advance tickets.

5. Chow Down on Memphis Barbecue

Memphis barbecue isn’t a destination – it’s a way of life.

Not to be confused with BBQ in the Carolinas, Kansas City or Texas, Memphis barbecue features ribs that are prepared both ‘wet’ and ‘dry’. This is a great American food city where BBQ masters slow cook meat both with and without sauce. In other words, condiment junkies and dry rub purists have a happy place in Memphis.

To be clear, Memphis barbecue isn’t just about ribs. It’s also about chopped pork and barbecue spaghetti at spots like Payne’s Bar-B-Que, The Bar-B-Q Shop, Cozy Corner and Central BBQ. Which Memphis BBQ joint is best? There’s only one way to find out…

Pro Tip
Eat at several Memphis BBQ joints to find your favorite. We have our favorite and you will too.

6. Pig Out on Fried Chicken

While Memphis may be world-famous for its barbecue but Memphis’ fried chicken rivals fried chicken in New Orleans and beyond. The key is to order well.

We ordered well at both Gus’s World Famous Fried Chicken and The Four Way. And by ordering well, we added sides like baked beans, fried green tomatoes, mac & cheese and okra. Trust us – you’ll want to do the same.

Pro Tip
Try to save room for dessert. It will be difficult but you’ll be sorry if you don’t have room to sample the likes of banana pudding and apple crisps.

Memphis turns into a party town at night. This is the ideal time to enjoy the city’s three B’s – beer, bourbon and burgers.

Join the party on Beale Street where you won’t be able to miss the bars thanks to the street’s neon signs. Then spread your wings and explore bars like Ernestine & Hazel’s, Belle Tavern and Tailors’ Union.

Pro Tip
Wear comfortable shoes when you bar hop since you’ll be walking in Memphis, albeit during the night.

During our long weekend in Memphis, we stayed at both a downtown apartment and the Sheraton Memphis Downtown Hotel. We also spent time at the Peabody Memphis, the city’s most elegant hotel and the home of the famous Peabody ducks.

Check out our guide to the best food in Nashville.

Sponsorship
We thank Visit Memphis for providing us with tickets to visit the best Memphis attractions.