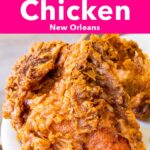 We first visited Willie Mae’s Scotch House in 2014. We had high expectations as we wandered out of the French Quarter, through Louis Armstrong Park and into New Orleans storied Tremé neighborhood, on our way to the famous fried chicken restaurant.

Although we felt safe walking through the shabby, gentrifying neighborhood filled with corner shops and shotgun shacks, we weren’t sure about our decision to take a two-mile walk for lunch on our last day in New Orleans.

We reminded ourselves that this is what we do when we travel… We walk and eat and then walk and eat some more in an ongoing quest to find the best food in the world.

Update
We returned in 2021 for a repeat lunch at Willie Mae’s and the food and service were just as good as we remembered. This article features photos from both meals.

Situated in an unadorned corner building with a green a white striped hooded awining, the restaurant blends seamlessly into the neighborhood with the exception of an inevitable line of eager diners that curls around the corner during lunch most days. Though we somehow missed the queue during our first visit, we got the full experience during our second visit.

Food travelers flock to Willie Mae’s based on accolades bestowed by the likes of the James Beard Foundation, the Food Network and the Travel Channel. The restaurant staff handles the crowds with aplomb and grace. In other words, don’t feel dismayed if you encounter a long queue when you arrive at Willie Maes.

Pro Tip
Arrive at Willie Mae’s Scotch House as early as possible to guarantee entry into New Orleans’ fried chicken motherland. The restaurant closed the line about 15 minutes before closing time during our most recent visit.

The Food At Willie Mae’s

While the menu at Willie Mae’s Scotch House features items like fried catfish and a seafood platter, we’re not sure who orders those dishes. To us, that’s like ordering chicken or steak at a seafood restaurant. We recommend ordering the mixed fried chicken platter which is what we ordered during both of our meals.

The platter was only $10 at the time of first meal and $15 seven years later. Sure, that’s a 50% increase but well worth it for what the menu calls ‘America’s Best Fried Chicken’ plus a side dish.

Pro Tip
Grab a quick meal at the Willie Mae’s outpost at the Pythian Market if you don’t have time for a full meal.

It takes serious nerve to describe your food as the best. That’s quite a superlative. However, in this case, the made-to-order fried chicken lived up to the illustrious description. We’ll take it one step further and say that eating this fried chicken is a must during any New Orleans itinerary.

Order a Willie Mae’s fried chicken meal from Goldbelly and see why it’s so great.

Each bite of our fried chicken was a revelation – crispy and slightly salty on the outside while utterly moist and juicy on the inside – during our first lunch at Willie Maes. We were hooked from our first bites and still smitten as we covertly licked our fingers after the final bites.

And guess what? The chicken lived up to our memories seven years later. Actually, it exceeded our memories with a spicy zing that made our taste buds go ka-pow.

Discover more of the best fried chicken in America and beyond.

During our first visit, Mindi went the classic route with sides of peas and macaroni and cheese. The sides were generously served right next to the chicken. Though not special, both sides provided a soft counterbalance to the chicken’s crunchiness. Plus, the peas reminded us of peas from our childhoods, which is not a bad memory.

Order a selection of Willie Mae’s sides from Goldbelly to take your own trip down memory lane.

Daryl smartly honored the New Orleans tradition of red beans on Monday by ordering a side of, you guessed it… red beans and rice. Made using the secret Willie Maes red beans and rice recipe, this side dish was substantial in both size and flavor.

We felt compelled to try a couple of extras after the two-mile trek. We surely burned off more than a few calories during the walk.

The cornbread muffins at Willie Mae’s are perfectly flaky as good cornbread should be. We recommend pairing the southern specialty with your Willie Maes fried chicken feast.

Each cornbread muffin cost less than a dollar during our second visit so ordering one or two is a no-brainer.

Fried okra was a fun choice that we couldn’t skip during our first visit. We popped a couple before we ran out of room. They were almost as tasty a few hours later on the plane.

Yes, we took our fried okra leftovers on our flight to Philadelphia but they didn’t make it past the flight.

Though we ran out of room for the fried okra, we somehow found room for dessert during our first lunch at Willie Mae’s.

We were tempted to order the bread pudding, but we were drawn to the key lime pie which sounded relatively lighter. Sweet yet refreshing, the key lime pie was a delightful dessert to share after our savory meal.

We probably couldn’t have handled an overly sweet dessert after the mega meal. This slice of pie had just enough tartness to satisfy our discerning taste buds.

Open since 1957, Willie Mae’s Scotch House is now run by the founder’s great-granddaughter, Kerry Seaton. The younger Seaton clearly learned well from her great-grandmother (the original Willie Mae) and is making good use of the family recipes.

We don’t know how she makes such succulent chicken on a grand scale. Although we saw the fryers working their magic in the kitchen, it’s still a mystery to us.

The two-mile walk back to the French Quarter felt good after the carb-heavy lunch at Willie Mae’s, especially since we were on a bit of a high knowing that we had just eaten the best fried chicken in America in one of the country’s best food cities. We’re not just saying that because of the menu’s description. We’re saying that because it’s true.

Why is it called Willie Mae’s Scotch House?

The restaurant is named after its original owner, Willie Mae Seaton. It’s called a scotch house since Seaton secured a liquor license but not a beer license.

What ward is Willie Mae’s Scotch House in?

The original Willie Mae’s Scotch House is located in New Orleans. The restaurant expanded to Los Angeles in 2022.

Yes. Bourdain ate at Willie Mae’s Scotch House while filming the fourth season of No Reservations.

This is clearly a trick question since fried chicken is obviously the best food to order at Willie Mae’s Scotch House.

Hungry for More Food in NOLA?

Check out our picks for the city’s best food, cheap eats, desserts, bars, coffee shops, drinks and po boys and then read about iconic New Orleans restaurants including Commander’s Palace and Brennan’s.

if you love extra salt in your. food you will like willie maes sorry service and i thur out the food to the dogs and cats horrible food. thanks corey

I was in NOLA last week on business. I always heard Willie Mae's was the best so I really wanted to go there and get the chicken. However they close at 5 so I never made it there 🙁

Oh well. We hope you can return. Eating the chicken there is a special experience.

ate at willie Mae's 1 time chicken was so salty I couldn't eat it. the red beans in think were left over from the day be for. never been back good luck

Did you guys also make it over to Dooky Chase's for some classic Creole cuisine? We're actually doing a cover story on Tremé for a travel magazine, and found the food there amazing!

We spent time in Tremé on a Monday, so Dooky Chase's was closed. We'll definitely add it to our list for our next trip though. It sounds like our kind of restaurant!

Ok, that looks unbelievably unhealthy but soooo good. Cannot wait to get myself down there. I did have a road trip planned for Louisiana but had to postpone it. Sometime soon :)