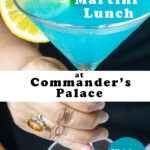 Dining trends come and go but an epic three martini lunch is a timeless way to experience the magic at one of the grand dining dames of New Orleans.

Ten years ago, If you asked us to create a dining itinerary for a food trip to New Orleans, a restaurant like Commander’s Palace would have appeared at the bottom of our list. In fact, it may not have made our list at all.

Back then, we were more into experiencing the ‘new chef on the block’ at spots like Sylvain and Cochon when we weren’t busy eating classic NOLA cheap eats like po’ boys, fried chicken and even donuts. After watching loads of travel roundups and documentaries on channels like the Food Network and Travel Channel, New Orleans’ traditional dining scene, featuring restaurants like Brennan’s, Antoine’s and, of course, Commander’s Palace, looked staid, over sauced, heavy, and (frankly) boring.

But fast forward 10 years and, after experiencing dining temples in France, slurping down noodles under corrugated metal roofs in Thailand and chowing down on pizza next to ancient Italian basilicas, our tastes have changed. The classic, timeless American food offered at restaurants like Commander’s Palace has become the food we crave.

Anyone who lives overseas can sympathize with our thinking. When we return to the USA, we want big burgers, America-sized portions and food with intense flavors along with service that attends to us at every second of the dining experience. Restaurants like Commander’s Palace, founded in 1893, offer all that and more.

Lunch, the meal we chose to enjoy at the Garden District stalwart, turned out to be a fantastic choice and not just because the menu includes 25 cent martinis. (We’ll get to the cocktails later.)

It’s worth noting that Commander’s Palace has entered the 21st century with its 2020 appointment of Meg Bickford as the restaurant’s first female executive chef. Bickford follows in the culinary footsteps of respected male chefs that include Emeril Lagasse, Paul Prudhomme and (most recently) Tory McPhail.

Let’s start by saying that Commander’s Palace, when it’s in full swing, feeds a lot of diners. The place is enormous, with dining rooms on three large floors and a vast, galley-like kitchen that reminded us of a miniature cruise ship kitchen. After taking a trip up the restaurant stairs and through a few dark dining rooms, we reached the light at the end of a tunnel in the sunlit Garden Room.

Sure, the Garden Room has a drop ceiling, indoor/outdoor carpet and doric columns but, for some reason, it all works. Could it be the restorative effect of the sunlight or is it the majestic ancient oak, older than the restaurant itself, that wraps around the room’s picture windows like an Ent from Lord of the Rings?

Whatever it is, you know that you’re in for a fun yet civilized lunch party when you dine in the Garden Room.

Our Lunch at Commander’s Palace

Our lunch at Commander’s Palace was one of many highlights during a week filled with culinary debauchery that one can only experience in New Orleans. From the moment we entered the doors and escaped the inevitable summer heat, we felt welcomed, relaxed and well fed.

Lunch at Commander’s Palace is a meal where more is more. Servers start the meal with buttery garlic bread with extra butter on the side. If you’re going to splurge on a meal in New Orleans, it might as well be here.

Pro Tip
Book your lunch at Commander’s Palace as early as possible. The restaurant is perpetually booked up by both locals and tourists. This is not a restaurant where you can expect to make a last minute reservation!

The Commander’s Palace lunch menu included seven appetizers at the time of our meal. We both opted for soup starters despite the hot weather. It was a good move.

While the appetizer typically has four shrimps, he brought us each one crustacean so that we wouldn’t miss out on the tasty tidbit. Winning again!

Daryl opted for the menu’s Classic Creole Luncheon, a three-course meal priced at $42 at the time of our visit. His main course was one of the restaurant’s newest dishes – Café Pierre Lacquered Texas Quail.

The charred foul was stuffed with smoked boudin, paired with vinegar-braised cabbage and flavored with both Crystal hot sauce pulp and a sticky Grand Marnier and Cognac jus. Time will tell but our guess is that it will stay on the menu for quite a while.

Mindi ordered the two-course lunch special featuring the restaurant’s Parade Route Po-Boy. She couldn’t resist the Mardi Gras reference plus she’s always a sucker for Po Boys in New Orleans. Plus, it was practically a cheap eats meal at $22.

We ended our meal with Commander’s Creole Bread Pudding Soufflé. It was a classic and easy choice. Plus, it was included with Daryl’s meal, so it was theoretically the only choice.

Pro Tip
You need to order the Creole Bread Pudding Soufflé 20 minutes in advance. Otherwise, you’ll have to ‘settle’ for desserts like Pecan Pie à la Mode and Georgia Peaches & Cream instead.

Apparently we weren’t unique when we ordered 25 cent martinis at Commander’s Palace. Our Facebook post practically blew up when we posted a selfie we took at the restaurant and almost every comment was about the martinis.

It sounds too good to be true but this deal is for real. The martinis, available in three colorful flavors as well as in its classic form, are full-sized and easy to drink. Mindi was happy to oblige by ordering all three colors. It was her own liquid rainbow.

Pro Tip
Pace yourself. The restaurant limits each drinker to three 25 cent martinis during lunch service.

Daryl diverged by sipping two excellent glasses of white Rhone wine on special for $5.99 each. He clearly didn’t get the memo but was happy nonetheless. How could he be otherwise…

Our lunch at Commander’s Palace wasn’t only great. It was one of many highlights of our trip to the Crescent City. The restaurant is a special place and may become a mandatory stop every time we visit New Orleans going forward.

Hungry for More in New Orleans?

Check out our guides to iconic NOLA restaurants and bars as well as the city’s best food, desserts, po boys, coffee shops, drinks and cheap eats.

The Trinity is Onion, Bell Pepper, & Celery, not carrot.