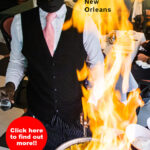 Brennan’s, the classic French Quarter restaurant, is the furthest thing from ‘cutting edge’ dining. But thanks to timeless dishes, killer cocktails and flaming desserts, breakfast at Brennan’s is a mandatory stop for food travelers who visit New Orleans.

To those who grew up watching TV in the 1980s, breakfast at Brennan’s evokes thoughts about Folger’s Coffee Crystals instead of fine dining.

You probably remember the commercial – it’s the one where the woman with the Linda Evans helmet hairdo is utterly shocked that the powers that be have replaced her morning coffee with Folger’s swill.

Ok, you get the point, which is sad. Brennan’s, open since 1946, has a rich history that dates back to a bygone era before celebrity chefs, gastropubs, small plate menus and online reservation systems.

The acclaimed restaurant endured destruction from Hurricane Katrina and a closure in 2013 that threatened its very existence. Luckily, a member of the Brennan family along with additional investors stepped in to save and remodel the French Quarter stalwart.

So how is Brennan’s now? We decided to reserve a 10am table to find out for ourselves.

Our Breakfast at Brennan’s

As we quickly learned, breakfast at Brennan’s isn’t an intimate affair. Located in a pink mansion, the restaurant is huge and bustling with an endless array of rooms and a spacious outdoor dining patio. Tables are covered with crisp white tablecloths and servers wear formal attire.

Despite the pomp and procedures, the atmosphere still felt casual enough for shorts on a hot summer day.

Not wanting to miss a bite or sip, we decided to enjoy it all from the menu’s marvelous appetizers all the way to the restaurant’s most famous dessert. In between, we drank classic New Orleans cocktails and ate eggs because… breakfast.

In case we forgot we were eating breakfast in New Orleans for a hot minute, the Brennan’s menu’s appetizer brought us back to reality. Every appetizer option screamed NOLA from Turtle Soup and Gumbo to the restaurant’s decadent take on French Toast.

Once our enthusiastic server recommended Oysters J’Aime, we were sold on sharing the dish. It was a good choice. The grilled, meaty oysters came topped with Creole tomato gravy and cornbread crumble.

After 75 years, it’s fair to say that Brennan’s has mastered the concept of breakfast with a menu filled with eggy creations – this is a restaurant that must have a fish tank filled with perfectly poached eggs at the ready. Popular dishes include Eggs Hussarde, a unique take on Eggs Benedict, as well as Eggs Sardou with crispy artichokes, Parmesan creamed spinach and choron sauce.

Of the two main dishes we ordered, Eggs St. Charles with crispy Gulf fish, creamed spinach and orange hollandaise sauce was the winner. The dish is a testament to the mastery of breading and frying that New Orleans cooks exhibit across the city. Piling rich eggs over crunchy fried fish may seem like overkill but, after a night of NOLA indulgences, Eggs St. Charles is a veritable hangover killer.

Speaking of hangovers, you might think that a spicy Bloody Mary embellished with pickled okra and a green olive would have been the potable star of our meal. However, it paled next to our Brandy Milk Punch, a creamy concoction that was dangerously easy to drink and inspired us to craft Bourbon Milk Punch cocktails at home.

To be clear, Brennan’s didn’t introduce Brandy Milk Punch to New Orleans. That honor goes to Tujaque’s, a nearby French Quarter restaurant that invented the Grasshopper. However, Brennan’s makes a mighty fine version that could have doubled for dessert if we weren’t set on ordering Bananas Foster.

Joining the daily parade of locals and tourists who eat at Brennan’s, we partook in the restaurant’s infamous table side theatre that involves fire, alcohol, sugar and bananas. Sure, we could have opted for a strawberry crepe dessert flambéed table side instead, but that dessert isn’t nearly so “famous” and doesn’t involve bananas.

We weren’t alone. It seemed as though every table in the restaurant was ordering Bananas Foster too. But that didn’t minimize the excitement we felt when our server wheeled the portable stove to our table and started combining butter, cinnamon and brown sugar in the pan.

Our excitement built as he added rum and banana liqueur, causing the flames to reach their crescendo. Eating the dessert with its caramelized banana and vanilla ice cream would have been a let down if it didn’t taste good. However, just like the rest of our breakfast at Brennan’s, eating Bananas Foster at the source was a cliché that lived up to the hype.

Hungry for More in New Orleans?