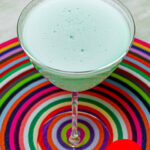 More than just a novelty drink imbibed at Christmas parties and on St. Patrick’s Day, the Grasshopper cocktail is a sweet pre-prohibition classic with a history rooted in New Orleans. And, yes, it’s green. Very green.

Kermit the Frog famously sang “it’s not easy being green…”. While true for the verdant muppet, these lyrics don’t apply to the Grasshopper cocktail.

Despite its creamy, chocolaty, minty flavor, the distinctly pastel green Grasshopper is incredibly easy to craft at home. If you can measure, pour and shake, then you can craft this drink in just three minutes. And, if you’re so inclined, you can sip low-alcohol Grasshoppers all night long.

Fun Fact
Beyond being green, frogs and grasshoppers are both excellent leapers. You can learn why in this fascinating ScienceDaily article.

What Is a Grasshopper Cocktail?

The Grasshopper is a classic cocktail that combines three disparate ingredients to create a potable after dinner mint. If you enjoy American candies like Andes Mints and Peppermint Patties, then this is the drink for you.

It’s also a cocktail with a definitive origin story. And it’s green!

History of the Grasshopper Cocktail

Like many iconic cocktails, the Grasshopper was invented by a New Orleans bartender.

In this case, the bartender was the owner of legendary Tujague’s and the year was around 1918. Records are a bit shady prior to Prohibition. Regardless of the exact date. the Grasshopper was created eight decades after the Sazerac debuted in the Crescent City.

Records reveal that Philip Guichet created the Grasshopper for a cocktail competition in New York City. While Guichet didn’t win the grand prize, placing second instead, he won an even bigger reward. More than a century after the competition, his Grasshopper remains a staple at bars, including Tujague’s, across America.

Tujague’s has been a restaurant fixture in the French Quarter since it opened in 1856. We found its bar to be delightfully dark and oozing with history during our initial 2011 New Orleans bar crawl. Although the bar moved to the former Bubba Gump Shrimp Co. space in 2020 after its Decatur Street building changed owners, the Grasshopper is still the cocktail to drink at Tujague’s.

When we returned in 2021, our Tujague’s Grasshopper tasted creamier and less minty than the bar’s original prize-winning recipe. Plus, it had what appeared to be a brandy flip on top. Apparently bartender Maxton Kennedy had a few tricks up his sleeve, giving new life to this old cocktail and inspiring us to craft the classic Grasshopper recipe at home.

Click here to buy Tujague’s Cookbook: Creole Recipes and Lore in the New Orleans Grand Tradition to learn more about Tujaque’s storied past.

The first three ingredients are included in a 1:1:1 ratio, specifically one ounce of each. Ice is only technically an ingredient since it’s necessary when shaking the cocktail.

Although two of its three ingredients are liqueurs, the Grasshopper is a relatively low-alcohol cocktail. We easily found the liqueurs, both produced by Bols in the Netherlands and clocking in with a 24% ABV, at our local liquor store.

Bols’ White Crème de Cacao smells exactly like what it is – a milk chocolate liqueur with added hints of vanilla and apricot. The pleasant aroma hit us as soon as we opened the bottle. This liqueur gives the Grasshopper its chocolate flavor.

Made with fresh mint leaves and infused with natural botanicals, Bols’ peppermint green Crème de Menthe has a vibrant green color and a somewhat medicinal aroma. While we wouldn’t want to drink this liqueur on its own, it gets credit for giving the Grasshopper its minty fresh taste.

Pro Tip
Using the wrong color liqueurs will result in a murky Grasshopper. Be sure to buy WHITE Crème de Cacao and GREEN Crème do Menthe.

How To Craft a Grasshopper Cocktail

You don’t need any special tools to craft Grasshopper drinks at home. We use a Japanese jigger , cocktail strainer and Boston shaker in our recipe but you can be creative if you don’t have these tools on hand.

The first step is to measure each of the three liquid ingredients. Our recipe calls for exactly one ounce of each liquid. We typically measure each with a Japanese jigger for ease and accuracy.

Click here to purchase a Japanese jigger from Amazon.

The second step is to pour each liquid into a shaker. We like to use a Boston shaker to avoid spillage and minimize clean up time.

Click here to purchase a Boston Shaker from Amazon.

The third step is to shake the drink with ice until the ingredients are mixed and chilled. This step should take about 30 seconds.

The final step is to strain the frothy mixture into a coupe glass or other elegant vessel. If you’re feeling creative, you can garnish the drink with fresh mint or grated nutmeg.

Adjusting the Grasshopper ingredients is a fun experiment but be warned that even slight changes can alter the cocktail’s minty green color. Perhaps the better option is to try one of the following Grasshopper variations: