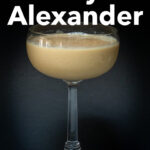 Rich and strong, our boozy Brandy Alexander ramps up the cognac to create a better beverage. Craft one at home in just five minutes if you can handle it.

We also became a little bit intoxicated but that’s a different story.

What Is a Brandy Alexander?

Wondering what a Brandy Alexander is? While the creamy cocktail may be a Hollywood darling, it’s not as popular as dessert drinks like Eggnogs, Mudslides and Milk Punch. In fact, we had never tasted the classic pre-prohibition cocktail until we crafted Brandy Alexanders at home.

While we both agreed that the Brandy Alexander crafted with dark crème de cacao was superior, we weren’t particularly wowed by the drink. To us, it was too similar to a Milk Punch to be special. So we took the cognac cocktail to the next level…

By increasing the cognac from one ounce to one and a half ounces, we essentially changed the ingredient ratio from 1:1:1 to 1:1.5:1. Voila! This boozier Brandy Alexander was a winner and the one that we want to imbibe again and again and again.

History of the Brandy Alexander

Most cocktail historians agree that the original Alexander was crafted with gin, crème de cacao and cream. Beyond that origin, the stories get fuzzy. Were the historians drinking too many Brandy Alexanders? It’s possible.

Troy Alexander, a bartender at the Rector Hotel in New York in the early 1900s, is a solid candidate for the honor of creating the original gin-based Alexander. If so, he probably named the drink after himself. However, some historians assert that the drink was named after a Philadelphia Phillies baseball pitcher named Grover Cleveland Alexander while others link it to other Alexanders. No, Alexander the Great was not one of the Alexanders.

While its history remains a mystery, the Brandy Alexander has played a supporting role in movies like The Days of Wine and Roses and TV shows like Mad Men. John Lennon compared Brandy Alexanders to milkshakes And, after a century (give or take) in the bars, it inspired a 2007 Feist song in which the singer rhapsodizes about how the Brandy Alexander goes down easy.

The Brandy Alexander’s ingredient list is short enough to count on one hand:

You likely have Cognac and Crème de Cacao in your liquor cabinet. If not, you should easily find them at your local liquor store. As for cream and nutmeg, both pantry items are available at markets around the world.

Like many Brandy Alexander recipes, our recipe calls for cognac, a twice-distilled, barrel-aged brandy produced in Cognac, France. Similar to our Vieux Carré recipe, we use Courvoisier V.S. cognac with a 40% ABV.

Buy bottles of Brandy and/or Crème de Cacao from Drizly or Total Wine if you live in the US.

How To Craft a Brandy Alexander Cocktail

You don’t need any special bar tools to craft a Brandy Alexander at home. We use the following basic bar tools in our recipe:

You can improvise if you’re missing any or all of these basic bar tools. However, none is expensive.

The first step is to measure the two liquors. You’ll want to measure one ounce of the crème de cacao and one and a half ounces of cognac.

We use a Japanese Jigger in this and other cocktail recipes to ensure accurate measurements and clean pours.

Purchase a Japanese Jigger from Amazon if you don’t have a jigger or want an inexpensive upgrade.

Pour each liquor directly into a shaker as you measure them.

We recommend using a Boston Shaker since it’s easy to use and clean. Plus, it never leaks and the lid doesn’t stick to the base.

Purchase a Boston Shaker from Amazon if you don’t have a shaker or want an inexpensive upgrade.

Next, measure an ounce of cream and pour it into the shaker with the liquors. Add a handful of ice.

Close the shaker and shake vigorously until the liquids are thoroughly mixed and chilled. This step should take about 20 seconds.

Strain the creamy drink directly into a coupe or martini glass. You could also serve it in a lowball glass on the rocks.

The last step is to lightly grate nutmeg directly on to the cocktail.

Our boozy Brandy Alexander is a pretty perfect potent potable. However, here are some variations and alternatives if you want to experiment to make the drink your own.

What are the ingredients in a Brandy Alexander?

Is the Brandy Alexander shaken or stirred?

The Brandy Alexander is shaken, not stirred.

Where was the Brandy Alexander cocktail invented?

The Brandy Alexander’s history is a mystery but it was probably invented in New York City.

When’s the best time to drink a Brandy Alexander?

Dessert time is the best time to drink a Brandy Alexander since the creamy cocktail tastes like liquid dessert.

What type of glass is best for a Brandy Alexander?

We like to serve this cocktail in a coupe glass but you could serve it in a small martini glass instead.