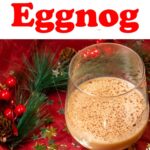 Our boozy Bourbon Eggnog recipe is both decadently delicious and ridiculously easy to make for just two people. In other words, the boozy Eggnog is an ideal cocktail if you want to celebrate the holiday season at home with somebody special.

Eggnog is the cocktail that we look forward to drinking every year. But it’s also a cocktail that we never made at home. Let’s face it, most Eggnog recipes involve punch bowls and excessive amounts of both cream and alcohol.

We decided to create a small-batch, boozy Eggnog recipe that we can enjoy in our Lisbon home. The challenge was real since we’re lazy mixologists who prefer to craft cocktails with quality ingredients but without blenders or fancy equipment.

We’re pleased as punch (pun intended) to report that we were successful in our mission. Not only is our homemade Eggnog recipe easy to make for just two people, but the boozy Christmas cocktail sips like a dream. We like it so much that we plan to drink it all year round.

We enjoy learning the origin stories of the various cocktails that we craft at home and the Eggnog is no exception. As it turns out, this drink’s history is as clear as a glass of the viscous beverage.

Some historians trace Eggnog back to the 15th century to England when monks drank Posset, a milky, spicy ale concoction while others connect it to British aristocrats who drank out of small wooden cups called noggins. However, nobody knows for sure when and where the popular milk punch was first imbibed.

Despite its luxurious texture and nuanced flavor, a good Eggnog recipe doesn’t require that many ingredients. The following items are all that’s needed to whip up our Bourbon Eggnog recipe in just 10 minutes:

Eggnog recipes run the gamut when it comes to liquor. Mixologists include dark rum, spiced rum, brandy, cognac and whisky in their Eggnog drink recipes, often combining two or more of these liquors.

The barrel aged liquor imparts vanilla and caramel notes to our Eggnog. We also add a splash of Cointreau to achieve a subtle hint of balancing orange acidity. Like many cocktails, Cointreau makes our Eggnog with bourbon recipe taste just a little bit better.

Though most Eggnog recipes call for cheap liquor, we use top shelf bourbon and premium Cointreau liqueur. Since our recipe is small enough to justify using top quality liquor, you should do the same when deciding about the best bourbon for your Eggnog.

Buy bottles of Bourbon and/or Cointreau from Drizly or Total Wine if you live in the US.

How to Craft Bourbon Eggnog for Two

We’re not the first to create an Eggnog recipe. Both Alton Brown and Martha Stewart beat us to the punch. (Pun intended again.)

However, you’ll want to follow our boozy Bourbon Eggnog for a couple reasons. First and most important, it tastes great. Almost as important, our recipe doesn’t require any special equipment like a blender or mixer.

You don’t even have to separate the eggs as required in most Eggnog recipes. It’s that easy.

The first step in our Bourbon Eggnog recipe is to vigorously whisk two raw eggs (both egg yolks and egg whites) in a medium mixing bowl. We like to use an 11-inch silicone ball whisk but any typical whisk will do. You can buy a whisk from Amazon if you need one or want to upgrade.

Are Raw Eggs Safe?
You may wonder if drinking raw eggs is safe. As in the case with other drink and food recipes, there’s a small but real risk of contracting a foodborne illness when consuming raw eggs. We’re comfortable with this risk but want to disclose the elephant ‘egg’ in the room.

The second step is to add sugar and continue whisking. Although some Eggnog recipes call for powdered sugar, we use granulated sugar in our recipe.

Using granulated sugar achieves a level of sweetness that’s not cloying. Plus, this type of sugar is a staple in our home kitchen.

After fully integrating the sugar with the eggs, the next step is to pour the dairy and liquor into the bowl. Since this recipe doesn’t require a blender or mixer, you can guess what to do next…

Yes, this Eggnog cocktail recipe requires a lot of whisking. And yes, it’s worth the effort for the drink’s ultra-creamy texture.

As a bonus, the recipe’s clean-up time is minimal without any blades or blenders to wash. By the time you’re done in the kitchen, the drink will be nicely chilled and ready for its final touch.

Adding freshly grated nutmeg is the last step in our Bourbon Eggnog recipe. This traditional ingredient adds a nutty flavor and exotic aroma. Plus, nutmeg makes an Eggnog look like an Eggnog.

The end product is a drink that tastes like liquid dessert. Honestly, the recipe isn’t all that different from making custardy crème anglaise, a base for many French style ice creams and crème brûlée. But, unlike crème anglaise, this recipe has bourbon which makes it more festive.

We recommend starting with our recipe when you decide to make Eggnog at home for a small gathering of two people. Of course, you can double or triple the ingredients if your intimate party is four or six people.

Then, if you’re feeling creative, you can modify our alcoholic Eggnog recipe to make it your own. Here are some suggestions:

Pro Tip
We don’t recommend replacing the cream, milk or eggs since these are the ingredients that make the Eggnog taste like an Eggnog. Skip this recipe if you’re vegan, lactose intolerant or have an aversion to raw eggs. Instead, pretend like you’re at a German Christmas market and drink mulled wine in a festive mug.

What are typical liquors to add to Eggnog?

Typical liquors include dark rum, spiced rum, brandy, cognac and whisky. We use bourbon to craft our Bourbon Eggnog recipe.

What are the ingredients in Bourbon Eggnog?

What’s the best bourbon to use in Bourbon Eggnog?

Your favorite bourbon is the best bourbon for this cocktail recipe.

Is it mandatory to add egg white?

Since egg white is a key ingredient in this Bourbon Eggnog recipe, we recommend crafting a different drink if you’re averse to the ingredient.

Is Bourbon Eggnog shaken or stirred?

This Bourbon Eggnog is shaken, not stirred.

What type of glass is best for serving Bourbon Eggnog?

We like to serve this cocktail in coupe glasses but you could use another type of glass instead.

Why not just use a food processor or blender?

We're not against food processors or blenders but our goal with this recipe was to create a tasty cocktail without muss or fuss. We were pleased with the results but appreciate that you may prefer using this type of equipment when you craft eggnog at your home.