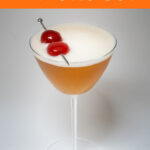 Reconnecting with the Amaretto Sour has been a sweet pleasure.

After drinking the sweet yet sour cocktail during our college years, the drink exited our cocktail loving minds over the past decades. We moved on. The version we had imbibed in our early 20s was concocted with store-bought sour mix and, to be honest, was more of a gateway drink than a crafted cocktail.

Times have changed and so has the idea of using cheap, subpar ingredients. Once we crafted Amaretto Sours at home with just a handful of wholesome ingredients, we had two questions…

First, we wondered why the Amaretto Sour isn’t as popular as other Italian cocktails like the Negroni and Aperol Spritz. And second, we questioned how soon we could drink Amaretto Sours again.

History of the Amaretto Sour Cocktail

While our history with the Amoretto Sour dates back to the latter part of the 20th century, the drink’s history goes back to the 1970s. However, while cocktail historians suspect that the sweet cocktail was invented in the United States, nobody knows exactly who deserves credit for its creation.

Regardless of its creator, the sweet drink hit a nerve with the 70s disco generation before being relegated to fresh university students and octogenarian grannies. Most everybody between these two demographics eschewed the 70s era cocktail as ‘passé’ for decades.

Fast forward to the 21st century and bartenders like Jeffrey Morgenthaler have re-invented the Amaretto Sour by removing the sour mix and adding extra ingredients like bourbon and egg white. Some add maraschino liqueur to their Amaretto Sour recipes while others add a few dashes of Angostura bitters.

What Is a Disaronno Sour?

Based in Italy’s Lombardy region, Disarrono is the world’s most prolific amoretto producer. Its almond flavored liqueur has a 28% ABV but, ironically, doesn’t contain any almonds. Instead, Disarrono uses apricot kernels to achieve its sweet flavor.

Fun Fact
Amaretto is no unitasker. It’s also a key ingredient in amaretti cookies. Some bakers also add the liqueur to tiramisu, a popular Italian dessert.

Some cocktails have a specific recipe that rarely if ever changes. The Amaretto Sour is not one of these cocktails. In fact, it seems like every recipe is different beyond the drink’s two main ingredients – amaretto liqueur and fresh lemon juice. Even the garnishes are different, typically maraschino cherries, orange slices or both.

After taste testing a few variations, we settled on the following ingredients for our Amaretto Sour cocktail recipe:

Our Amaretto Sour recipe includes two liquors – amaretto and bourbon. We’ve consciously chosen to use a higher ratio of amaretto compared to other recipes.

Buy a bottle of Diaronno Amaretto from Drizly or Total Wine if you live in the US.

We also use less lemon juice than other recipes plus a relatively small amount of Four Roses bourbon. The result is a cocktail that retains its amaretto flavor and isn’t too tart.

Adding an egg white results in a silky top layer that looks and tastes great. Feel free to omit the egg white if you don’t feel comfortable ingesting raw eggs or if you’re vegan. Another option is to replace the egg white with a tablespoon or two of aquafaba.

How to Craft an Amaretto Sour

Crafting an Amaretto Sour doesn’t require any special equipment or tools. We typically use the following tools when we craft one ourselves:

Don’t abandon your Amaretto Sour mission if you’re missing any of these tools. Get creative instead. As an example, you could use an angled measuring cup instead of jigger and squeeze the lemon with your hands instead of with a citrus juicer.

The first step in our Amaretto Sour recipe is to measure the amaretto, bourbon and fresh lemon juice. We use a Japanese jigger to ensure clean and accurate measurements.

Buy a Japanese jigger from Amazon if you don’t have one or if you want to make an inexpensive jigger upgrade.

The second step is to separate and measure the egg white. You can skip this step if you’re vegan or if you’re uncomfortable with drinking raw egg product.

Warning
Your cocktail won’t have a foamy top layer if you omit the egg white.

Pour the liquors, lemon juice and egg white into a cocktail shaker as you measure each. We like to use a Boston shaker for this and other cocktail recipes since it doesn’t leak.

Buy a Boston shaker from Amazon if you don’t have a shaker or if you want to improve your at-home mixology experience.

Pro Tip
Make simple syrup by mixing equal parts of water and sugar in a saucepan and just bringing the mixture to a boil until the sugar is dissolved. Remove from heat immediately and let cool.

The fourth step, shaking the cocktail, has two parts:

First, vigorously shake the ingredients without ice for about 10 seconds. This process is called a ‘dry shake’ and allows the egg white to emulsify.

Next, after adding ice, shake the cocktail for about 20 seconds until the ingredients are thoroughly mixed and chilled.

Pro Tip
There’s no need to ‘dry shake’ the cocktail if you omit egg white from the recipe.

The fifth step is to strain the cocktail into a coupe glass. You can use a lowball glass if you prefer.

Finally, garnish the drink with maraschino cherries. We typically opt for luxurious Luxardo cherries; however, in this age of images and engagement, cocktail cherries photograph better due to their bright red color.

Buy a jar of Luxardo cherries from Amazon.

Once you buy a bottle of Disarrono amaretto, you may wonder what else to do with the sweet Italian liqueur. Unless you want to stick with drinking Amaretto Sours, we suggest crafting one or more of the following cocktails:

Please tell me where that glass in the photo for the amaretto sour recipe is from. I must have it! It’s not the Reidel in your link. It’s more modern. Help! TIA

We bought the glass at a store called Area in Lisbon. We didn't include a link since Area is specific to Portugal while many of our readers are in the US. Good luck in finding a glass that you love as much as we love this glass!