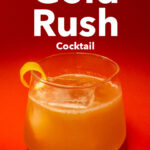 The Gold Rush glitters bright in the cocktail galaxy. Follow our easy recipe and craft the tasty bourbon cocktail at home in just five minutes.

You might think that the Gold Rush cocktail dates back to the mid 19th century when adventurers headed west in search of golden nuggets. You might also think that it was invented in California where those fortune seekers met their destinies. As it turns out, neither is actually the case.

Instead, this modern-day NYC cocktail is a tasty tipple whose treasures are available to all game to give it a try.

What Is a Gold Rush Cocktail?

The Gold Rush cocktail will sound eerily familiar to cocktail connoisseurs who have previously imbibed Whiskey Sour and Bee’s Knees cocktails. With ingredients similar to both, it’s a modern day mashup of those two pre-prohibition cocktails.

But, crafted with bourbon, fresh lemon juice and honey syrup, the Gold Rush, a simultaneously sweet and sour cocktail, stands on its own merits.

History of the Gold Rush Cocktail

Unlike California’s Gold Rush, which was epic in both size and scope, the history of the Gold Rush drink is short, sweet and can’t be traced to America’s Golden State.

Cocktail historians credit T.J. Siegel for crafting the original Gold Rush cocktail at now-closed Milk & Honey in New York City. And, despite the golden cocktail’s classic list of ingredients, it was first concocted in 2001.

Purchase a copy of Sasha Petraske’s Regarding Cocktails to discover more cocktails crafted at Milk & Honey.

Some cocktails require a special trip to the liquor store and/or market. The Gold Rush is not one of those cocktails. In fact, you probably already have the following necessary ingredients:

We use Four Roses bourbon to craft our Gold Rush cocktails. It’s a great bourbon for cocktails since its flavors are relatively mild with hints of both vanilla and caramel. It’s also one of the more affordable bourbons produced in Kentucky and has a 40% ABV – the lowest possible ABV for Kentucky bourbon.

How to Craft a Gold Rush

We use the following tools in our Gold Rush recipe:

You can improvise if you’re missing any of these tools. For example, you can use a small angled measuring cup instead of a jigger or a paring knife instead of a peeler.

Measure the bourbon, freshly squeezed lemon juice and honey syrup. We use a Japanese jigger to get accurate measurements and easy pours for all three of these liquids.

We like to prepare honey syrup in advance so that it has time to cool. However, we squeeze the lemon juice on the spot for maximum freshness.

Pro Tip
Prepare honey syrup in advance the same way you would prepare simple syrup – with a 1:1 ratio of honey and water stirred over a medium fire until the mixture simmers and the honey and water are well mixed. It’s an easy process that only takes five minutes in a small saucepan.

Pour the bourbon, lemon juice and honey syrup directly into a shaker as you measure each.

We use a Boston Shaker to craft this and other cocktails and we love it. It’s so easy to use and doesn’t make a mess. Our previous shakers often leaked and the lid would stick to the base between uses.

Add a handful of ice cubes to the shaker and shake vigorously for 30 second or until the liquids are chilled and blended.

Purchase a Boston Shaker if you don’t have a shaker or want an inexpensive upgrade.

Drop a large ice cube into a lowball or rocks glass. Immediately strain the shaken cocktail into the glass.

Buy a jumbo ice cube tray from Amazon if you don’t already have one. Jumbo ice cubes are magical in homemade drinks!

The final step is to garnish the crafted Gold Rush with a lemon twist.

Pro Tip
Peel the lemon twist before you squeeze out the lemon juice.

With is combination of bourbon, lemon juice and honey syrup, the Gold Rush just might satisfy your cocktail sweet spot. If not, one of the following variations will likely get you buzzing:

Where was the Gold Rush invented?

The Gold Rush was invented at the now-closed Milk & Honey bar in New York City.

What are the ingredients in a Gold Rush?

What’s the best whiskey to use in a Gold Rush?

Is the Gold Rush shaken or stirred?

The Gold Rush is shaken, not stirred.

What type of glass is best for the Gold Rush?