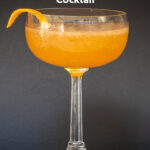 Easy to craft and a pleasure to imbibe, the Brown Derby cocktail is ideal for a lazy brunch or a cosy night by the fire. Our addition of maple syrup makes this prohibition cocktail simply impossible to resist.

The Brown Derby cocktail is our new favorite bourbon cocktail.

Granted, we say this almost every time we craft a new-to-us bourbon recipe. But there’s something special about this three-ingredient tipple that makes it better than other bourbon cocktails.

Is the cocktail better because we replace honey syrup with maple syrup? We don’t know. We just like it.

What Is a Brown Derby Cocktail?s

The classic Brown Derby cocktail is a sour cocktail crafted with just three ingredients – bourbon, honey syrup and grapefruit juice. As noted above, our recipe replaces the honey syrup with maple syrup.

Regardless of the syrup choice, it’s an incredibly easy cocktail to craft with pantry ingredients and basic bar tools. It’s equally easy to imbibe with flavors that are simultaneously sweet and sour.

History of the Brown Derby Cocktail

The history of the Brown Derby cocktail is unclear.

In his book The Craft of the Cocktail, Dale DeGroff attributes the Brown Derby’s creation to bartenders at Hollywood’s Vendôme Club. DeGroff’s theory is that the bourbon drink was named after the Brown Derby, the now-closed Los Angeles restaurant that invented the Cobb Salad, during the 1930s.

However, Harry Craddock included an almost identical cocktail called the De Rigeur in his The Savoy Cocktail Book. Craddock published the iconic cocktail manual in 1933.

The ingredient list for our Brown Derby cocktail recipe is so short that you can count them with the fingers on one hand.

You probably have all of these items in your pantry and home bar. If not, you can buy any missing items at a local market.

Selecting the right liquor is a priority when you craft a simple cocktail. We choose to use Four Roses bourbon in our Brown Derby recipe.

Typically produced in Vermont and Canada, maple syrup is a product usually served with pancakes, french toast and waffles. We sometimes use the sweet elixir when we cook bacon. In a culinary twist of fate, the natural sweetener is a great cocktail ingredient too.

We like to use amber Grade A maple syrup when we craft Brown Derby cocktails at home. The distinct syrup achieves a rich flavor that we adore. Canadian cities like Montreal sell maple syrup in cans at local markets. In Lisbon, we can buy Canadian maple syrup at a nearby grocery store.

It literally took us less than a minute to extract the juice from this grapefruit using our Braun juicer. We also made a grapefruit twist from the skin of the same fruit.

How To Craft a Brown Derby Cocktail

Our Brown Derby recipe only has a few ingredients and doesn’t require any special tools or equipment. We used the following items to craft this Brown Derby cocktail:

The first step is to measure the three liquid ingredients. We like to use a Japanese jigger to ensure accurate measurements and to minimize spillage. We also like using a small angled measuring cup for these same reasons.

You’ll want to pour the liquids directly into a shaker as you measure them. We like to use a Boston shaker since it is easy to use and quick to clean.

Buy a Boston Shaker from Amazon if you don’t have a cocktail shaker or want an inexpensive upgrade.

Add a couple hand fulls of small ice cubes to the shaker.

Shake the liquids until they’re chilled and mixed – approximately 20 seconds.

Fun Fact
The shaking step is the most difficult step of this recipe. It’s also the most fun.

Strain the shaken mixture into an empty coupe glass.

Buy coupe glasses from Amazon if you want a matching set.

Gently rub a grapefruit peel slice around the rim of the coupe glass to enhance the cocktail’s flavor and aroma.

Drop the grapefruit peel slice into the glass or place it on the rim.

You’re correct if you think that the our Brown Derby cocktail recipe is both easy and delightful. The same goes for the following variations that you can try if you’re missing any of this cocktail’s three ingredients:

What is a Brown Derby cocktail?

Where was the Brown Derby invented?

It was possibly invented in Los Angeles but the history of the Brown Derby is unclear.

What are the ingredients in a Brown Derby cocktail?

Is the Brown Derby shaken or stirred?

The Brown Derby is shaken, not stirred.

What type of glass is best for the Brown Derby?