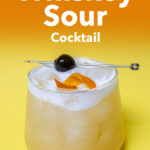 The Whiskey Sour ranks as one of the most popular drinks in the world. It’s a pleasure to drink and a breeze to craft at home. Follow our Whiskey Sour recipe and join the happy crowd of Whiskey Sour fans.

The Whiskey Sour is a bit of an anomaly.

It’s a sour drink that’s not too sour. It’s also a pre-prohibition cocktail that tastes fresh and modern.

However, one thing about this classic cocktail is abundantly clear. Even for novice mixologists, it’s as easy to craft a Whiskey Sour as it is to drink one.