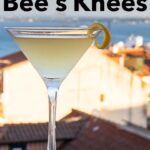 The Bee’s Knees is the cat’s meow when it comes to classic cocktails. The three-ingredient gin lemon cocktail is both sophisticated to sip and super easy to make at home.

With a name evoking a buzzing cartoon character, the Bee’s Knees cocktail makes us smile. For starters, its rhyming moniker is fun to say. Second and more importantly, the refreshing cocktail maintains a balance of sugar and acid without being sickly sweet or overly tart.

As much as we enjoy ordering a Bees Knees drink at the bar, we prefer making and drinking the honey-infused gin sour at home. This is a cocktail that requires no special investment since we typically have all the ingredients on hand without making a special shopping trip.

Some classic cocktails have a fascinating origin story. The Bee’s Knees cocktail has multiple stories.

The most prevalent story accredits the Bee’s Knees to prohibition bootleggers who added honey and lemon to bathtub distilleries filled with gin. Apparently, the extra elements softened the liquor’s strong odor while sweetening its harsh alcoholic flavors.

Two stories involve bartenders – Frank Meier in Paris and Bill Boothby in San Francisco. There’s even a story involving the colorful Denver dowager better known as the Unsinkable Molly Brown inventing the cocktail in Paris during the last hurrah of the roaring 20s.

Since nobody knows for sure, we choose to believe the Molly Brown tale. Though it’s the most far-fetched of the four stories, it could and should be true. In other words, it’s the bee’s knees of this cocktail’s origin stories.

Do Bees Have Knees?

As we learned during a visit to a Trentino honey farm, bees are amazing creatures. Not only do they pollinate flowers to naturally create honey but they also have joints that connect their femurs and tibia.

In other words, bees do indeed have knees – six knees to be exact for those who are counting. Perhaps it’s no coincidence that flappers used the phrase ‘bee’s knees’ to describe something as extra special.

Fun Fact
Bees mate in the sky. This fact has nothing to do with the Bee’s Knees cocktail but it’s a fun fact to know.

What’s in a Bees Knees Cocktail?

A Bee’s Knees cocktail is special despite and because of its easy preparation that requires just three key ingredients: gin, lemon juice and honey syrup. The drink is shaken with ice to achieve maximum refreshment; however, we’re not counting ice as an ingredient.

Dry gin provides a botanical punch while fresh lemon juice brings a citrusy brightness. Combined in a shaker, gin and lemon juice create a gin sour cocktail. Adding honey simple syrup transforms the mixture to a sweet and sour concoction that literally and figuratively is the Bee’s Knees.

We bought dry Bombay gin at a local liquor store to craft our Bee’s Knees cocktail. However, you may want to use artisan gin or a name brand gin like Hendrick’s or The Botanist instead.

Buy a bottle of gin from Drizly or Total Wine if you live in the US and want to try a new-to-you gin.

We developed a healthy respect for the golden nectar known as honey in countries like Italy and Greece while we were nomadic, often buying jars of artisan honey as edible souvenirs during our travels. For this recipe, we purchased a jar of wild lavender honey produced in Portugal’s Algarve region.

Created by bees and rich in antioxidants, honey is a natural sweetener that elevates the Bee’s Knees cocktail to classic status. Or, as we like to say, honey is the money ingredient in this gin cocktail.

Fun Fact
Each bee produces a total of one teaspoon of honey in its entire life. Think about that the next time you add a spoonful of honey to your yogurt or, in this case, cocktail.

Though not a typical cocktail ingredient, honey works splendidly in this Bee’s Knees recipe. But it’s not the only drink with honey as an ingredient. The Hot Toddy, Gold Rush and Penicillin are other notable cocktails that feature honey.

Pro Tip
Prepare your honey syrup in advance the same way you would prepare simple syrup – with a 1:1 ratio of honey and water stirred over a medium fire until the mixture simmers. It’s a super easy process that only takes five minutes in a small saucepan.

We adore making and drinking this Bee’s Knees cocktail recipe with gin. However, if you’re not a gin fan or if you ran out after making one too many G&Ts, you can use vodka, rum or bourbon instead.

You can also get creative by adding extra ingredients like dried lavender, splashes of orange juice, a sprig of fresh mint or even rosemary. Have fun and make the drink your own.

How to Craft a Bee’s Knees Cocktail

When it comes to crafting classic cocktails at home, the Bees Knees cocktail ranks high both for ease of preparation and drinkability. No fancy mixology skills are required beyond pouring, mixing and twisting lemon peel.

Who invented the Bee’s Knees cocktail?

With multiple potential origin stories, the true history of this classic cocktail is a mystery.

What are the ingredients in a Bee’s Knees cocktail?

What’s the best gin to use in a Bee’s Knees cocktail?

Your favorite gin is the best gin for this cocktail recipe.

What is honey syrup?

Honey syrup is similar to simple syrup but it’s made with honey instead of sugar. Made with a 1:1 ration of honey and water, honey syrup is easy to make at home in a small saucepan.

Is the Bee’s Knees cocktail shaken or stirred?

The Bee’s Knees cocktail is shaken, not stirred.

What type of glass is best for the Bee’s Knees cocktail?

Do bees have knees?

Bees do indeed have knees.

It’s almost wrong that a recipe this simple tastes so good. (The key word = almost.)