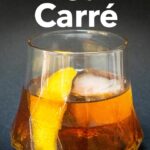 Sipping a Vieux Carré is like sipping New Orleans.

Invented in the heart of the French Quarter, this classic cocktail stands tall in a city that celebrates cocktails every day of the year. It’s especially popular during Mardis Gras and when the city hosts Tales of the Cocktail each year.

A unique blend of ingredients makes the Vieux Carré special.

First, there are a lot of them – four liquors and two different bitters – which creates a beverage that’s as sweet and boozy as it is herbal and smooth. Then’s there’s the liquors themselves. Just like the city’s population, their heritage represents a melting pot that includes France, Italy, the Caribbean and the good old USA.

What Is the Vieux Carré?

Vieux Carré is another name for NOLA’s French Quarter where the cocktail was invented. Over the years, the Vieux Carré has become one of the city’s signature cocktails.

It’s a stellar sipper that combines no fewer than four liquors and two types of bitters in one glass. The resulting combination is both rich and wonderful.

History of the Vieux Carré

We suspect that Walter Bergeron, a bartender at Hotel Monteleone‘s Carousel Bar, was a big fan of the Manhattan when he crafted the original Vieux Carré almost a century ago.

After all, this New Orleans drink is basically a Manhattan with a couple extra ingredients, namely cognac and Bénédictine herbal liqueur. He also added Peychaud’s bitters because that’s what one does in New Orleans

Historians trace the Vieux Carré back to the 1930s, around the same time that Stanley Arthur published Famous New Orleans Drinks & How to Mix ‘Em. Today, the Vieux Carré is as famous in New Orleans as the Grasshopper, Pimm’s Cup and Bourbon Milk Punch. The Sazerac and Hurricane are in another cocktail orbit. Sorry Vieux Carré!

Drinking at the Carousel Bar is like stepping back into time. Not only can you sit at a bar that looks and rotates just like a carousel, but you can also sip a Vieux Carré at the same spot where literary luminaries including Truman Capote, William Faulkner, Ernest Hemingway, Anne Rice and Truman Capote did the same.

Unlike many classic cocktail recipes, the Vieux Carré has a formidable list of ingredients and they’re all integral. But, once you acquire all of the following items, you can make the cocktail again and again:

Other than the lemon peel, every ingredient in the Vieux Carré is either a liquor or bitter. There are no mixers in this New Orleans cocktail.

Rye, cognac and sweet vermouth play equal roles in the drink. Our recipe includes an ounce of each. While our recipe only calls for a half ounce of Bénédictine, the French liqueur’s herbaceous flavors are essential.

How To Craft a Vieux Carré Cocktail

Crafting a Vieux Carré cocktail is easy as pie once you assemble all of the ingredients. And, by ingredients we mean four liquors, two types of bitters and a lemon. Phew!

On the upside, you don’t need any special bar tools to craft a Vieux Carré. We use the following basic bar tools in our recipe:

You can improvise if you’re missing any or all of these bar tools. For example, you can use a small angled measuring cup instead of a jigger.

The first step is to measure the Rye, Cognac, Sweet Vermouth and Bénédictine in a 2:2:2:1 ratio. We use a Japanese jigger for this step to ensure clean pours and minimize spillage.

Purchase a Japanese jigger from Amazon if you don’t have a jigger or want an inexpensive upgrade.

You’ll want to pour each liquor into a mixing glass immediately after you measure it. Almost any vessel will work if you don’t have a mixing glass. As an example, we used the bottom of our Boston shaker to craft this cocktail.

Purchase a mixing glass from Amazon if you’re feeling fancy.

The next step is to add two dashes each of Angostura Bitters and Peychaud’s Bitters into the same mixing glass.

As is always the case with bitters, a little bit of bitters goes a long way in this Vieux Carré recipe.

The next step is to add a handful of small ice cubes into the mixing glass and stir until the liquors and bitters are chilled and combined. This step should take about 20 seconds.

Once the liquors are combined and chilled, gently drop an extra large ice cube into a your prettiest lowball glass and then strain the liquid into the glass.

Lemon is the traditional garnish for the Vieux Carré cocktail. Instead of creating a lemon twist, we simply peel a lemon slice with a Y peeler.

Buy a Kuhn-Rikon Y peeler from Amazon if you don’t have a peeler or want a cheap and cheerful upgrade.

The final step is to express the lemon peel by rubbing it along the rim of the glass before gently dropping it into the glass.

Once you craft a Vieux Carré, it’s unlikely that you’ll need any alternatives. However, there may be times when you’re missing an ingredient or two. Here are some ideas for that scenario:

You can garnish with a cherry instead of, or in addition to, the lemon peel.