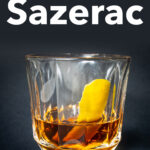 The Sazerac may be one of the oldest cocktails in America but the classic New Orleans drink is as relevant today as ever. Follow our Sazerac cocktail recipe and craft the sophisticated sipper at home.

A complex cocktail that’s simultaneously strong, spicy and sweet, the Sazerac is more than a popular cocktail invented in New Orleans. According to the Louisiana legislature, it’s also the city’s official cocktail.

That accolade is a big deal. After all, NOLA is the country’s unofficial cocktail capital and the home of the annual Tales of the Cocktail festival. But is the honor merited worthy considering other cocktail candidates that include the Absinthe Frappe, Hurricane, Ramos Gin Fizz and Vieux Carré?

Not only does the Sazerac cocktail sip like a dream but, with ingredients that include absinthe and Peychaud’s bitters, it also tastes like New Orleans in a glass.

What Is a Sazerac Cocktail?

The Sazerac really isn’t all that different from another classic cocktail, the Old Fashioned. Both cocktails are boozy sippers made with a dark liquor, bitters and a sugar cube.

However, while a typical Old Fashioned is made with bourbon and Angostura bitters, the Sazerac replaces those ingredients with rye and Peychaud bitters and adds an absinthe (or pastis or Herbsaint) rinse for good measure.

History of the Sazerac Cocktail

The Sazerac’s history dates back to the 19th century when the (now closed) Sazerac Coffee House first served the cocktail that Antoine Peychaud allegedly created at his French Quarter apothecary. His recipe included Sazerac-de-Forge et Fils cognac, absinthe and a secret blend of bitters. Almost a century later, Peychaud’s signature blend remains a key ingredient in any proper Sazerac. The other ingredients, not so much.

While we use absinthe in our Sazerac recipe, other recipes replace the potent anise-flavored spirit with France’s pastis or New Orleans’ Herbsaint. The reason for this recipe alteration goes back to 1912 when the US banned the sale of absinthe due to a concern that La Fee Verte (i.e. The Green Lady) caused hallucinations.

Although that hallucinogenic concern was disproved and absinthe eventually returned to the American marketplace with reduced thujone (found in wormwood) levels in 2007, not everybody in New Orleans got the memo. They continue to craft Sazeracs with Herbsaint, a local favorite, instead of absinthe.

Buy a copy of Tim McNally’s The Sazerac if you want to dig deeper into the classic cocktail’s past.

Perhaps the Sazerac would have achieved more widespread popularity had absinthe not been banned for almost a century. We’ll never know for sure. But we do know that the boozy beverage never lost its luster in its home city.

In 2008, the Louisiana’s senate made the Sazerac’s the state’s official cocktail. More recently, in 2019, the Sazerac House opened a multi-floor exhibition celebrating the cocktail’s history and offering Sazerac samples to all who take a free tour.

Make an appointment to tour the Sazerac House.

The Sazerac’s ingredient is relatively short considering the cocktail’s big flavor. Here’s everything you need to craft a classic Sazerac at home:

Rye whiskey is the dominant ingredient in the Sazerac so you’ll want to use a good one. A solid choice would be to use Sazerac Rye produced by Buffalo Trace; however, we don’t have easy access to that particular American rye where we live.

We bought a bottle of Rittenhouse Rye with a 51% ABV for this and other recipes. Although it’s distilled in Kentucky, the liquor has a Philadelphia connection just like us. Its name was inspired by Rittenhouse Square located in the center of the city of brotherly love.

Buy a bottle of Rittenhouse rye from Drizly or Total Wine if you live in the US.

While you have flexibility in choosing the rye, this is not the case with the bitters. Peyhaud’s is the one and only bitters choice when crafting a proper Sazerac cocktail.

Not only was Peychaud’s bitters an original Sazerac ingredient all those years ago, but the ruby red bitters has a spicy blend that works well in this cocktail. Similar to Sazerac Rye, Peychaud’s is currently produced by Buffalo Trace in Kentucky. It has a 35% ABV.

Buy a bottle of Peychaud’s Bitters from Drizly or Total Wine if you live in the US.

Although absinthe plays a supporting role in the Sazerac recipe, it’s absolutely integral to the cocktail’s final flavor. Sure, you could use Herbsaint or pastis to get that hint of anise but we choose to use Absinthe as did Antoine Peychaud.

We purchased a bottle of Absente 55 Absinthe for this and other recipes. Produced in France and as its name suggests, the green liqueur has a relatively low ABV of 55%.

Buy a bottle of Absente 55 Absinthe from Drizly or Total Wine if you live in the US.

How to Craft a Sazerac Cocktail

As is the case with most classic pre-prohibition cocktails, the Sazerac doesn’t require any unusual bar tools. We used the following tools when crafting our Sazerac:

You can improvise if you’re missing any of these two bar tools. For example, you can use a small angled measuring cup instead of a jigger. Also, using a cocktail strainer is optional.

Before you start crafting a Sazerac, you’ll want to fill a lowball glass (also known as an old fashioned glass) with ice cubes and set it aside.

The first step is to drop a sugar cube into a second low ball glass and add four dashes of Peychaud’s bitters.

Muddle the sugar and bitters to create a sludge.

Measure the rye whiskey in a jigger. We use a Japanese jigger to ensure an accurate measurement and avoid spillage.

Buy a Japanese jigger from Amazon if you don’t have a jigger or fancy an inexpensive upgrade.

Immediately pour the rye whiskey into the second lowball glass with the sugar-bitters sludge.

Gently stir to integrate the ingredients. Briefly set this lowball glass aside.

Empty the ice from the first lowball glass.

Measure and pour a half ounce of absinthe and pour it into the chilled glass. Swirl the glass so that the absinthe coats the glass’s interior.

The next step is to discard the absinthe. While you could hypothetically pour the absinthe down the drain, the better option is to drink the green liqueur.

The Sazerac cocktail is a beloved classic in New Orleans and beyond. However, we won’t judge you if you prefer crafting one of the following alternatives: