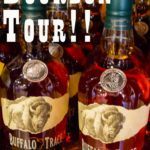 Check out our experience taking a Buffalo Trace distillery tour and see what we ate for lunch after our fun tour of the famous Frankfort Kentucky distillery.

Imagine our surprise when we made a stop on the Kentucky Bourbon Trail for our Buffalo Trace distillery tour in Frankfort and met our tour guide from … wait for it … Philadelphia.

With a southern drawl and a warm, welcoming smile, the tour guide seemed every bit like a local at first glance. We totally assumed that he was born and bred in Kentucky until he shared the news that not only was he from Philadelphia but also that he had once lived just five blocks from the house that we left behind when we answered the call to travel.

Located just 660 miles from Philadelphia, Buffalo Trace Distillery in Frankfort feels like another world. Instead of the high rises and parking lots that define the Philadelphia landscape, horse farms and distilleries dot the grassy landscape of Frankfort’s rolling green hills.

Inspired by wild buffalo that once roamed freely along the Kentucky River on passes called traces, parent Sazerac Company renamed the company to Buffalo Trace in 1999. The parent company is currently spending $1.2 billion to expand the distillery’s campus.

But how did tour guide Fred Mozenter get to Buffalo Trace from Philadelphia? It’s not exactly a normal path to move from Philadelphia to Frankfort. And how did he end up with a coveted job working at the distillery where he traded his Philly accent for a southern drawl?

It turns out that Mozenter worked for the Pennsylvania Liquor Control Board (PLCB) as a store manager for 34 years before taking an early retirement package. Upon retiring, he decided to pursue his true passion – bourbon.

That passion led him to Kentucky and his second career at Buffalo Trace. Hired because he could “make bourbon fun”, Mozenter has been giving tours at Buffalo Trace since he moved south to Frankfort with no end in sight.

During the Buffalo Trace Bourbon tour, Mozenter educated us about the company’s storied history which dates back hundreds of years and survived prohibition.

The oldest continuing operating distillery, Buffalo Trace distributed bourbon for “medicinal purposes” during prohibition. Today, the distillery displays memorabilia from its history including site maps and pictures detailing the long, eventful past.

The Buffalo Trace Hard Hat Tour shows Buffalo Trace Bourbon in its various stages as it transforms from corn mash to liquid gold.

Starting with the cookhouse and the huge fermentation vats, the tour is hands-on – literally. During the tour, participants get to taste fermenting mash and wash their hands with freshly distilled bourbon, activities that let all five senses experience the distilling process.

“All bourbons are whiskey but not all whiskeys are bourbons.”

At the end of the tour, we tasted four different Buffalo Trace brands distilled at Buffalo Trace including Clix vodka and decadently rich bourbon cream. As an unexpected treat, we indulged in Buffalo Trace Bourbon chocolates made by a local chocolatier, Rebecca Ruth Candy Factory. All of these products and more are available at the distillery’s onsite Buffalo Trace gift shop.

Just like his getting the job at Buffalo Trace, us meeting him was “meant to be.” Hearing his story validated our decision to follow our dreams of traveling and tasting the world.

Since man cannot live on bourbon and chocolate alone, you should follow your distillery tour with lunch at one of the many restaurants near Buffalo Trace Distillery. If you like unique American sandwiches, be sure to order a Kentucky Hot Brown.

After our tour, we followed these instructions and ate a Grilled Kentucky Hot Brown at Gibby’s in downtown Frankfort. Located just two miles from the distillery, Gibby’s is a local institution and a perfect spot for a post-bourbon tour lunch.

Buffalo Trace tours are complimentary but must be reserved in advance.

We took the Hard Hat tour which we highly recommend; however this tour is on hiatus during the renovations. You can make free reservations when it resumes. Other tours include the Trace tour, the Expansion tour, the Old Taylor tour and the Bourbon Barrel tour.

All tours include bourbon tastings. Hooray!

Thirsty for More in Kentucky?

Check out the best places to drink in Louisville, just a one-hour drive from the Buffalo Trace Distillery.

Sounds like a great tour! And such a great story about your guide and how he came to work there. I love that although his previous career ended he has been able to do this for the last seven years. He clearly enjoys himself!

I have never had bourbon but this place isn't too far from home. Would make a great weekend trip with the hubby! Thanks for sharing!!

OMG I adore Bourbon - lucky you!!!

You should visit Buffalo Trace for Best Sips!

Ooooh ... does this mean you are back state-side?

Nope! Although we are currently in France, we still have stories to share about our North American road trip. Hopefully the mix of topics will keep things interesting for you.