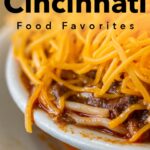 Do you know what foods in Cincinnati are famous? We visited Cincinnati Ohio specifically to eat our Cincinnati food favorites, Graeter’s Ice Cream and Skyline Chili, at the source. But what did we think of the Queen City beyond these two iconic foods?

Founded in the 18th century and later settled by German immigrants, Cincinnati is a classic Midwest city best known for its professional sports teams and prime location on the Ohio River. Before our visit, we didn’t know a lot about the city beyond what we learned from the classic television sitcom WKRP in Cincinnati

But we knew about the Cincinnati famous food and wanted to try the two best things to eat in Cincinnati.

What Food Is Cincinnati Famous For?

We were intrigued to visit Cincinnati since it’s the home of both Graeter’s Ice Cream and Cincinnati Chili. Yes, we will travel for food, and these two Cincinnati Ohio food icons were reason enough for us to add a stop in Cincinnati to our US road trip.

Although we weren’t sure what we’d find to do beyond eating chili and ice cream in Cincinnati, this food travel opportunity was enough for us to stop in the city for a quick visit. We loved the city’s vibe and quickly found a number of fun things to do in Cincinnati like the American Sign Museum and the National Underground Railroad Freedom Center.

As we traversed the city’s streets, many colorfully decorated with evocative murals, we discovered a surprisingly progressive city with a food culture that includes third wave coffee shops, a happening craft beer scene and some of the country’s best donuts.

We quickly learned that the Cincinnati cuisine is for real. In our opinion, Cincinnati is one of the best food cities in America.

There are so many reasons to visit Cincinnati. We visited Cincinnati for just two of them – Graeter’s Ice Cream and Skyline Chili. We wanted to try these famous Cincinnati food icons in Cincinnati, the city of origin for both of these popular foods.

We often enjoyed Graeter’s French Pot style ice cream back in Philadelphia, and it’s easily our favorite American ice cream brand. If you think that all ice cream is the same, then you need to try Graeter’s Ice Cream right away!

We’ve since eaten amazing ice cream in Italian cities including Bologna, Venice and Verona. Graeter’s stands along with the ice cream in these European cities.

Graeter’s has been owned and managed by the Graeter clan for over a hundred years, and the quality of the ice cream is a true testament to the family and its loyal customers who are willing to pay a little bit more for a better ice cream product.

Maybe it’s the special French Pot method that involves a labor-intensive small batch process. Maybe it’s the quality of ingredients like the real chocolate they use in every batch. Maybe it’s the wide variety of flavors and big chunks of chocolate. Or maybe it’s the extra touches like how they pack each pint by hand.

We saw all of this and more during the special factory tour. The owners and employees at Graeter’s couldn’t have been more gracious and even participated in our very first YouTube video.

Although Graeter’s Ice Cream is available in 47 states, we recommend that you try it in Cincinnati. The factory isn’t open to the public, but Graeter’s has over 50 stores where customers can order popular flavors like Black Cherry Chocolate Chip and Butter Pecan as well as limited edition and summer bonus flavors like Key Lime Pie and Watermelon Sorbet.

Pro Tip
If you can’t get to Cincinnati, you can visit a Graeter’s shop in select Midwest cities like Chicago, Indianapolis and Columbus. You can also order Graeter’s Ice Cream from Goldbelly to eat at home.

What do you get when you combine spaghetti, chili and shredded cheddar cheese on one plate?

If the concoction includes flavors like cinnamon, nutmeg and chocolate, then you get the Cincinnati food favorite known as 3-Way Chili. Totally different from Texas chili, Cincinnati chili is more of pasta dish where the chili serves as the gravy.

Discover the best noodle dishes in the world.

This unique chili dish was invented in the early 20th century by Macedonian immigrants, which explains the exotic flavors. You could almost say that Cincinnati Chili is a close relative to moussaka, a Greek food staple, both in flavor and concept.

After you eat Cincinnati Chili, explore more iconic American food favorites you need to eat at least once in your life.

Nicholas Lambrinides opened the original Skyline Chili in Cincinnati and named the restaurant after the restaurant’s view of the city’s skyline. Fast forward to today, and there are now over 150 Skyline Chili locations in four states. Don’t ask us for the Skyline Chili recipe – that’s apparently a well-guarded secret.

Pro Tip
Be sure to get a York Peppermint Patty when you pay your bill at Skyline Chili. This popular American candy provides a sweet counterpoint to the restaurant’s spicy chili. If you miss out on them in Cincinnati, you can order York Peppermint Patties from Old Time Candy instead.

We later recreated the Cincinnati recipe at home in Lisbon. While it’s not a dish to eat every day, it was just as almost as great as eating it at the source.

Pro Tip
Don’t feel like you have to order three-way chili. You can ramp your order up to four-way with onions or five-way with onions and beans. You can do the same if you order Skyline Chili from Goldbelly to eat at home.

Where to Eat in Cincinnati

Why stop at Graeter’s Ice Cream and Skyline Chili when you visit Cincinnati? The city has more great food that warrants attention.

Beyond the most famous food in Cincinnati, we recommend checking out the following local Cincinnati food establishments during your visit:

Check out our food guides for Buffalo, Las Vegas, New Orleans and Philadelphia.

Now you have to come back and try our microbreweries. My fave is Listermanns right across from Xavier University. There is also Mount Carmel Brewing over near Eastgate and 50 west. So many to choose from. Also check out the restaurant scenes in Downtown, Over-the-Rhine, and Hyde Park I can personally recommend E&O and Alfio's Buon Cibo. Also you need to check out the Oakley Fish House and Aglamesis just down the block in Oakley.

We agree and are eager to return to Cincinnati.

I live in Cincinnati and you couldn't pay me to eat Skyline Chili. The cinnamon and nutmeg make it almost inedible. It's ok on a hot dog, but other than that...eeww To be fair, I'm a transplant from Northeast Ohio, and I would kill to have Mr Heros sandwiches down here. So, I guess if you don't grow up with it, it's a selective taste?

@Sondra Hunt, you should go up to Toledo for Tony Packo's famous hot dogs. Delicious!!

I live right by jungle jims. I love going there once a week to look at foreign foods. they did some remodeling a few months ago. and now there's a graeters drive thru in the place. that coupled with the skyline down the street. ( or just get pasta and chili in JJs ) and ur good for a Friday nite treat

Empress was the original Cincy chilli and all the owners of the famous chains worked there first and branched off into Skyline Goldstar and Camp Washington.Also I suggest Agelmesisis ice cream that is every bit as good as Graters ice cream and they make it fresh

@Carl, I live about a mile and a half from Aglamesis and I absolutely love it!! Graeter's is great, but Aglamesis is even better!!

There is one golden gem of Cincinnati cuisine, and it's little known outside the region: Goetta.

Forget the chili, forget the ice cream. Travel to Cincinnati, step in to any greasy spoon, and order a breakfast of goetta, eggs, and toast.

Similar to scrapple, it's made with oats instead of corn, but it's infinitely better.