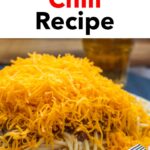 Cincinnati Chili is the ultimate comfort food for people who love spaghetti, cheese and chili. Follow our easy Cincinnati Chili recipe and make the decadently delicious dish at home this weekend.

We ate Cincinnati Chili for the first time while traveling. Though we’d heard of the dish before, we’d never had the occasion to taste it until our travels took us to Cincinnati.

This situation is not unique for us. Culinary curiosity has catapulted us to dozens of states in America as well as to more than 40 countries. It’s also the reason we added Cincinnati to our epic US road trip route in 2016.

Neither of us had ever been to Cincinnati; however, we were itching to try the Queen City’s two iconic foods. Yes, the mid-size Ohio city has not one but two iconic foods: Cincinnati Chili and Graeter’s Ice Cream.

After scheduling a tour at Graeter’s Ice Cream factory on the outskirts of the city, we focused our efforts on one thing and one thing only. Our mission was to eat as much Cincinnati Chili as physically possible in just 24 hours.

What Is Cincinnati Chili?

Cincinnati Chili lives up to its name insomuch that’s it’s from Cincinnati and its main ingredient is chili. Sort of. The chili in this dish is nothing like chili eaten in Texas or sold in cans across America. Instead, it’s more like a Greek meat sauce with flavors of cinnamon, clove and bay leaf. It’s kind of like pastitsio meets spagbol meets a burrito.

Read about the best noodle dishes in the world.

In Cincinnati, cooks start by topping oval plates with spaghetti and then smother the simple pasta strands with highly seasoned meat sauce. Based on how the ‘chili’ is ordered, they finish by adding the following:

You may be wondering about Cincinnati One Way Chili. Wonder no more. One Way Chili isn’t a thing. Without the fixings, it’s just plain spaghetti and we don’t play that way.

Pro Tip
Don’t count out Cincinnati Chili if its combination of disparate ingredients sounds weird to you. In our opinion and, more importantly, the opinion of millions of hungry midwesterners, Cincinnati Chili is dee-licious.

The History of Cincinnati Chili

In many ways, Cincinnati Chili is a quintessential American dish with its all-American cheddar cheese, Mediterranean flavors and Italian pasta. But how and when did it begin?

No flash in the pan (or should we say dutch oven?), Cincinnati Chili has been a thing in Cincinnati since two Macedonian brothers concocted the flavorful gravy in 1922. A century later, the city has more than 100 chili parlors serving versions of the city’s most popular comfort food.

While Tom and John Kiradjieff get credit for inventing Cincinnati at their Empress Chili parlor during the 1920s, Greek immigrant Nicholas Lambrinides took Cincinnati Chili to the next level two decades later when he opened Skyline Chili and modified the recipe in 1949.

Lambrinides clearly did something right – Skyline Chili and Cincinnati Chili are now practically synonymous. The chain now has over 150 locations in four states including Indiana, Kentucky and Florida.

Order Skyline Chili from Goldbelly to eat at home.

Where Is the Best Cincinnati Chili?

Some people will quickly respond with Skyline Chili, the city’s 800-pound chili gorilla. Not only does Skyline have a secret recipe and numerous locations, but eating at Skyline is an absolute must for its slice of midwestern culture.

Others will respond with Camp Washington Chili, a local institution with just one location and prestigious accolades that include a James Beard award. As a bonus, this Cincinnati chili parlor has a dinner menu and hours that extend through the night.

Pro Tip
Don’t twirl your spaghetti when you eat Cincinnati Chili in its home city. Locals are choppers instead of twirlers and will know right away that you’re not a native Ohioan.

We’re not going to lie. The number of ingredients required to make Cincinnati Chili is daunting at first glance. However, a deeper look reveals that almost every ingredient is a pantry staple in kitchens around the world.

We mentioned before that Cincinnati Chili has Mediterranean roots and the dish’s ingredients validate this assertion. We’re talking about spices like cloves and cinnamon as well as unsweetened chocolate.

Make no mistake – this recipe has some kick. Ingredients like red pepper flakes and chili powder add a punch that justifies drinking a refreshing beer or two with the dish.

We went the extra mile and made our chili powder from scratch by grinding and blending ancho, guajillo and chilie de árbol peppers and then adding a blend of spices like garlic powder and oregano. However, chili powder sold in American grocery stores and on Amazon should suffice.

True Confession
We only made the chili powder from scratch because we can’t easily buy proper American-style chili powder in our home city of Lisbon. It was worth the extra effort.

How To Make Cincinnati Chili

Call us crazy but we think it’s fun to make Cincinnati Chili at home. The hardest part is measuring all of the ingredients before dumping them into a dutch oven with two pounds of ground beef. See below for an Instant Pot cooking option.

While you can use a pot with a heavy bottom, a dutch oven works best and will let you do a low and slow simmer without burning the bottom. We recommend that you stir your chili frequently either way.

Buy a dutch oven from Amazon.

After we added all the ingredients, we were amazed by the number of empty prep bowls that surrounded the pot. They numbered more than a dozen!

By preparing the mis en place in advance, making the actual recipe was a breeze.

Buy prep bowls from Amazon if you don’t have enough to complete this and other recipes.

To be honest, we’re not sure which step was more fun – dumping everything into the pot or mashing it all together with a large potato masher. Yes, we use a potato masher to make our Cincinnati Chili recipe.

Buy a potato masher from Amazon if you don’t already have one in your kitchen.

While not as fun as dumping or mashing, pouring six cups of water into the pot is the last step before letting the chili simmer. You can do other things in the kitchen or on your computer while the dutch oven does its magic over the next couple hours.

You’ll start to smell the blending of tantalizing flavors right away. In fact, our kitchen smelled like a Mediterranean spice market once we assembled all the ingredients. The aromas only improved as the dish cooked.

Expect the chili to cook for at least two hours. You’ll know it’s ready when its consistency resembles a thick Italian meat sauce as opposed to a super thick Texas chili.

It’s time to make spaghetti around the two-hour mark. A lot of recipes are flexible about the type of pasta you use. This is not one of those recipes.

For this recipe, you need to use the kind of simple spaghetti you may have eaten with meatballs as a kid. You’ll want to cook the pasta a few minutes past al dente.

Plating our Cincinnati Chili recipe is easy peasy as the dish is intended to be messy. Use tongs to plate the pasta and a ladle to cover the pasta with the chili.

If you haven’t done so already, this is the time to decide if you want to make 3-way, 4-way or 5-way chili. Since we decided to make 4-way chili, we added chopped raw onions in addition to shredded cheddar cheesse.

We had kidney beans on hand but decided not to use them. If we had decided otherwise, we would have made 5-way chili. Maybe next time.

The final step is to smother the entire dish with shredded cheddar cheese. Don’t be shy. You’ll want to add a lot of cheese. This is not a dish where less is more. You’ll understand as soon as you take a bite.

Pro Tip
Grate the cheddar cheese with a box grater into long strands while the chili is cooking and then put the shredded cheese into the freezer to chill for a maximum of 20 minutes. You do not want the cheese to melt.

You may be wondering if you can cook Cincinnati Chili in an Instant Pot. The answer is YES.

While we don’t have an Instant Pot ourselves, a reader has advised that this recipe cooked like a dream in her Instant Pot. She followed all of the steps and measurements as outlined in this recipe. However, she cooked the chili for 25 minutes in the Instant Pot instead of 2 hours in a dutch oven.

If you have an Instant Pot, we say go for it!

What Goes with Cincinnati Chili?

To be honest, you don’t NEED to add anything to our Cincinnati Chili recipe but you may WANT to add some hot sauce for extra zip. We added a few dashes of Louisiana hot sauce and the smoky flavor worked well.

The fine folks in Cincinnati often add crushed oyster crackers to their Cincinnati Chili spaghetti dishes. Since we’re not from Cincinnati, that’s overkill for us. The dish isn’t exactly dainty – not that we’re complaining.

While we’re on the same page about not adding oyster crackers, we agree to disagree when it comes to dessert. It’s a local tradition to eat a York Peppermint Patty after eating a plate of chili spaghetti in Cincinnati. Unlike Daryl, Mindi loves the candy classic.

We save the best for last. It turns out that our Cincinnati Chili recipe tastes even better the next day. In other words, don’t throw away the leftovers!

You can always cook some more spaghetti to whip up another round of 3, 4 or 5-way chili or you can make one of the following with the savory meat sauce:

Better yet, maybe you’ll create your own recipe. As we always say… Your Kitchen, Your Rules.

While we can’t guarantee that you’ll love our easy Cincinnati Chili recipe, we’ll be surprised if you don’t. Cincinnati Chili is as easy to make as it is to eat. It will likely be the best Mediterranean meat sauce you’ve ever served over spaghetti.

Cincinnati Chili is a hot American plate of yum. You know you want to try it and we say go for it.

I've had this it's disgusting. How could you call it Chili?

We didn't invent Cincinnati Chili. We only show you how to make it. If you have a problem with the dish, you can always travel to Cincinnati and file a complaint with the people who invented it.

My husband and I grew up in Cincinnati. We love Skyline Chili. When we go back to visit we go to all our favorite restaurants. My Dad would take my sister and I to Graeter's for ice cream.

Such great memories! Thanks for sharing them.

Native Daytonian, no onions IN chili but on top. 👍🏻 I'm glad everyone is enjoying our great chili.

One fairly significant issue. There is no chopped onion in Cincinnati chili. None. Not ever. ON it, sure, but not IN it.

In Lisbon? Because if they do we haven't noticed it.