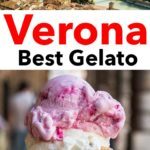 Our love for Italian gelato is infinite. Check out our picks for the five gelaterias that serve the best gelato in Verona Italy.

One week in Verona was enough time for us to fall for the fair city. Our parting was such sweet sorrow that we returned five months later for a repeat performance.

Our second trip was different from our hectic inaugural visit. Having already toured the city’s ancient arena and ascended Juliet’s balcony, we focused our time on doing our very favorite thing to do in Verona. In other words, we nibbled on Italian desserts, ate Risotto all’Amarone at some of the best Verona restaurants and revisited our favorite Verona Gelato gelaterias.

The Best Gelato in Verona

As unofficially ‘certified’ gelato connoisseurs, we were pleased to discover several excellent gelaterias in Verona when we visited the charming Veneto city for the first time. Like many of the best Italian food cities, Verona has gelato scene filled with artisan boutiques as well as national chains.

As background, we’ve been big fans of Italian gelato every since we devoured our first cones of gelato in Bologna back in 2010. We solidified our love by taking a class at Carpigiani’s gelato university several years later.

These are the five Verona gelaterias that you don’t want to miss if you’re an Italian ice cream fan too:

Practically at the foot of the Adige River by the Ponte Pietra bridge, Gelateria Ponte Pietra has been serving excellent gelato in Verona since 1999. The popular gelateria also serves Sicilian granitas, milkshakes and brioche sandwiches filled with gelato.

During our visit, we shared a double-dip cone with White Chocolate Pistachio on the bottom and Stracciatella on top. Both flavors hit us in the face with their bright flavors and creamy texture. We licked the cone until the gelato was gone and then we ate the cone.

We’re not saying that Gelateria Ponte Pietra is our favorite Verona gelateria. That being said, it’s the first gelateria we’ll visit when we return to Verona. Okay, it was our favorite.

Pro Tip
Spend an extra euro to get a cone coated with chocolate and nuts for optimal gelato enjoyment.

The only Verona gelateria awarded ‘three cones’ by Gambero Rosso at the time of our most recent visit, Zeno Gelato e Cioccolato takes pride in crafting gelato with ingredients procured from local farmers, cheesemakers and winemakers. Yes, winemakers.

Though we were tempted by the gelateria’s simple flavors like milk cream and its exotic flavors like peanut salt and beer, we couldn’t resist eating gelato featuring the Veneto’s king of wines. With this in mind, we shared a cup of creamy gelato made with pears, cherries and, of course, Amarone wine.

We enjoyed the experience of queuing with locals who jam this tiny gelateria on a nightly basis. We also enjoyed eating the gelato. Most of all, we enjoyed strolling along the Adige River before and after our visit.

Pro Tip
Buy chocolate pralines and truffles if you visit Verona during the winter months. The gelateria produces artisan chocolate from November to Easter.

Open since 1939, Gelateria Savoia could easily rest on its laurels and serve simple gelato flavors to its generations of fans. Instead, the historic gelato pushes the ice cream envelope with its variety of creamy offerings.

After almost ordering one of the gelateria’s penguin gelato popsicles, we instead shared a cone topped with two flavors – Amarena (cherry) and Grappa with Amarone wine and cake crumbles. We can’t say that this is the best gelato in Verona but its unique flavors are worth a visit or two.

Pro Tip
Gelateria Savoia is located on the edge of Piazza Brà. Stop by for a cone or penguin pop when you’re in the neighborhood.

Originally opened in 1947 in Rimini, Gelateria La Romana now has dozens of gelaterias throughout Italy and in countries like Spain, Germany and Austria. More importantly, the artisan ice cream chain opened its Verona location in 2013.

Locals line up to eat cones topped with freshly prepared gelato at this shop away from the maddening crowds. They choose from funky flavors like Stracciatella Grand Cru and Mint Licorice with Pink Salt as well as from standard flavors like Lemon and Strawberry.

Regardless of their choices, customers get gelato made with ingredients like organic milk, eggs from land-based farms and freshly whipped cream. More importantly, the gelato tastes good.

Pro Tip
Ask the server to add either milk chocolate or white chocolate sauce to the bottom of your cone. It’s free!

We trekked to Il Mustacchio Verona in the hopes of combining gelato with specialty coffee. Our hopes didn’t exactly come to fruition since the gelateria’s coffee preparation was nothing special. Despite our coffee disappointment, we still enjoyed eating a cold gelato cone on a hot day at this sleek, modern gelateria

Pro Tip
You can combine a visit to Il Mustacchio with a visit to Basilica di San Maggiore. It’s just a 10-minute walk between the two locations.

Is gelato good in Verona?

Most gelato in Verona is good. The gelato at our recommended gelato shops is great.

What is the best gelato in Verona?

While Gelateria Ponte Pietra is our favorite Verona gelato shop, the best way to answer this question is to taste them all yourself.

Where did Anthony Bourdain eat gelato in Verona?

Where did Phil Rosenthal eat gelato in Verona?

Phil Rosenthal has not yet filmed an episode of Somebody Feed Phil in Verona.

Where did Stanley Tucci eat gelato in Verona?

Phil Rosenthal has not yet filmed an episode of Somebody Feed Phil in Verona.

Is gelato expensive in Verona?

No. In fact, most Verona gelato shops are highly affordable.

Is tipping necessary in Verona?

What’s the best time to eat gelato in Verona.

This is a trick question since it’s always a good time to eat gelato in Verona.

Check out our gelato guides for Bologna, Naples, Rome and Venice as well as our ice cream guide for Lisbon.