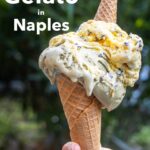 Gelato is one of our favorites foods to eat in Naples. Not only does it cool us down during hot days of touring under the Mediterranean sun, but, after a day of intense pizza consumption, the creamy treat also sates our sweet tooth and makes us smile.

Naples gelato, while of high quality, has a homespun quality with a mishmash of flavor combos. Yes, unlike the purity of gelato flavors found throughout Italy, Napoli gelaterias feature flavors that approach a level of gimmickry.

In other words, there’s plenty of great gelato in Naples but, generally, this is a gelato scene that doesn’t take itself too seriously.

We’re not alone with our Naples gelato love. Locals clearly like eating it too based on the number of gelaterias sprinkled throughout the city, especially on lively Via Toledo where gelato seems to be even more popular than pizza.

The Best Gelato in Naples

You won’t find Italian chains like Grom and GIOELIA in Naples. This is an Italian food city with enough room for dozens, if not hundreds, of gelaterias. However, just like pizzerias in Naples, the best gelato shops are all locally based.

Some of the best Naples gelato shops have one or two locations while others have multiple shops spread all over the city. During three separate visits spanning six weeks in total, we ate cone after cone in an assortment of flavors from deep dark chocolate (chocolate fondant) to Sicilian cassata (a take on one of the most classic Italian desserts).

These are our favorites:

We found Gelateria Valenti the old-fashioned way. We literally bumped into this Naples gelato shop while wandering around Centro Storico. A few steps later, we exchanged our wandering with pondering as we perused tempting flavors like salted caramel and pistachio as well as yogurt with cereal and strawberries.

Though it feels like it’s been operating on Via dei Tribunali for decades, Gelateria Valenti is a relatively new player in the Naples gelato scene. Open since 2018, this gelateria is a shining light with a central location, creative flavors like Kinder Cards made with Kinder bars and, of course, wonderful creamy gelato.

While Gelateria Valenti offers some fun flavor combos, there’s nothing wrong with ordering a cup of creamy pistachio gelato made with crunchy pistachios. If you’re feeling adventurous, you can pair your gelato with a brioche or crepe. As for us, we ordered a triple decker cone and agreed that it was some of the best gelato in Naples.

Though it just has one location now, Gelateria Valenti has plans to open a second shop just 50 meters away and it wouldn’t surprise us if more locations follow. Prices are fair, flavors are tight and there’s upstairs seating for those who need a break.

Pro Tip
Start your morning with a breakfast cone at Valenti Gelato. Then take a 10 minute walk over to L’Antica Pizza da Michele and beat the line when the historic pizzeria opens. Be sure to check websites for current operating hours.

Gelateria Valenti is located at Via dei Tribunali, 53, 80138 Napoli, Italy.

Operating for more than 50 years, family-run Menella Il Gelato is a local institution with more than a half dozen shops in Naples. Crowds of locals queuing for cones confirm this status seven days a week regardless of the weather and temperature.

Starting our most recent gelato crawl at the Menella Il Gelato gelateria located just a few blocks from our hotel at Piazza Dante, we skipped tempting flavors like Stracciatella and Crostata alle Amarene (tart cherry) and doubled down with two scoops of Cassata decorated with a dollop of fresh panna montata (whipped cream) on top.

Although Cassata is typically associated with Sicily, Menella’s sweet, creamy Neapolitan ice cream version loaded with candied fruit and nuts was nothing short of a delight. We licked the gelato until the cone was all that remained. Then, we ate that too.

Fantasia Gelati lives up to its name. With six locations in Naples, this award-winning gelateria has provided a multi-sensory experience replete with bright colors and even brighter flavors since it opened in 1994.

These flavors run the gamut from simple to sophisticated. While purists stick with fruit flavors like fig, tangerine and Sorrento lemon, kids of all ages go ga-ga for scoops filled with kinder bars, oreo cookies and smarties. As for gourmands, they can choose from seasonal flavors made with buffalo milk.

During our most recent visit, we enjoyed a cone topped with Amarena and an unfamiliar flavor – Benevento. Recommended by a Naples local, this unique gelato flavor gets its name from a key ingredient – Strega liqueur produced in Campania’s Benevento.

Beyond gelato, Fantasia serves Mexico coffee and a selection of cakes and crepes. Though not our pick for the very best gelato in Naples, this gelateria serves a tasty product and is certainly a contender for the Naples gelato shop serving the city’s most fun flavors.

Pro Tip
Ascend Naples’ biggest hill by foot or metro if you want to sit while eating your gelato. Fantasia provides seating at its Vomero location.

An ‘infant’ in name only, Casa Infante is a multi-generational gelateria that proudly traces its roots back to 1940, the year that Leopold Infante opened his acclaimed Neapolitan bakery. Famous for his tarallo, Infante later added products like sfogliatella, babà and gelato.

Leopold’s progeny, Fabio and Marco, run the family’s sprawling gelato operation with 10 locations in Naples plus a few outposts as far away as Milan. The duo focuses on both style and substance as evidenced by Casa Infante’s tony decor and artisanal gelato.

With so many locations in Naples, including a few on Via Toledo, it’s hard to miss Casa Infante when touring the city. The hard part is narrowing down the many pastry and gelato options.

Overwhelmed by an array of gelato flavors during our autumnal gelato crawl, we ultimately ordered a cone topped with Crema di Pistacchio and Zuppa Inglese. Thanks to ingredients like Sicilian pistachios, Alchermes liqueur, shredded dark chocolate and amareno cherries, we weren’t disappointed with our decision.

Pro Tip
Ask about seasonal gelato specials before you place your order.

Gay-Odin has been a Neapolitan chocolate pioneer since 1894 when Isidoro Odin started producing chocolate in Naples. The company’s gelato history is shorter, dating back to just 2008.

Unlike other gelaterias in Naples, Gay-Odin focuses on the classics instead of offering dozens of flavors. However, not surprisingly, Gay-Odin’s curated range of flavors includes several chocolate options featuring ingredients like rum and orange peel.

We paired the rich, nib-studded gelato with a scoop of raspberry. The classic combination of deep chocolate flavor combined with tart yet sweet raspberry tasted divine.

Pro Tip
Feeling hungry? Skip the cone and eat your gelato stuffed inside a brioche sandwich.

ROL earned its spot on the Naples gelato horizon as soon as Roberta Rubino and Olga Nigro opened ROL Gelateria. Not only does ROL serve solid gelato in a stylish setting, but it was also the first gelateria to offer a view of the Bay of Naples.

Despite its touristic location, ROL’s female owners use hyper-local ingredients in their recipes. Gelato flavors include two of our favorites, Cassata and Amareno, while sorbet flavors range from typical lemon and peach to more exotic cantaloupe and kiwi.

We ate scoops of Rol (almond, pistachio and hazelnut) and Chocolate Fondant with colorful plastic spoons as we watched the burnt orange Tyrrhenian sun kiss the azure Bay or Naples. Both the sunset and gelato were memorable.

Pro Tip
Time your visit to ROL Gelateria to coincide with the sunset. While ROL’s gelato is value-priced, its view is priceless.

Is gelato good in Naples?

Most gelato in Naples is good. The gelato at our recommended gelato shops is great.

What is the best gelato in Naples?

While Gelateria Valenti is our favorite Naples gelato shop, the best way to answer this question is to taste them all yourself.

Where did Anthony Bourdain eat gelato in Naples?

Bourdain didn’t include any Naples gelato shops in his Southern Italy episode of No Reservations which aired during its seventh season.

Where did Phil Rosenthal eat gelato in Naples?

Phil Rosenthal hasn’t yet filmed an episode of Somebody Feed Phil in Naples.

Where did Stanley Tucci eat gelato in Naples?

Tucci skipped eating gelato in Naples when he filmed the first season of Stanley Tucci: Searching for Italy. You’ll have to rely on our recommendations instead.

Is gelato expensive in Naples?

No. In fact, most Naples gelato shops are highly affordable.

Is tipping necessary in Naples?

What’s the best time to eat gelato in Naples.

It’s always a good time to eat gelato in Naples.

Check out our gelato guides for Bologna, Rome, Venice and Verona as well as our ice cream guide for Lisbon.