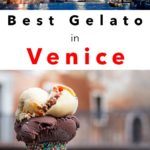 Gelato isn’t likely your primary reason for visiting Venice Italy, but you know you want to eat the best gelato in Venice while you’re there. Read on to discover five Venice ice cream shops that you simply cannot miss during your trip to the watery Italian wonderland.

Venice is a photographer’s dream destination. Regardless of the weather, every scenic stroll and gondola ride inevitably turns into a photoshoot with the city as the glamorous star.

Don’t get us started about Venice flooding. We were in Venice for the epic 2019 flood, but that’s another story.

We spent a week in Venice and, without a doubt, Italy’s city of canals is gorgeous. But, as much as we loved the epic views that literally hit us in the face every time we left our apartment, we gave our Fitbit a workout for another reason – a noble quest to find the best gelato in Venice.

Food travelers like us who visit Italy have access to great gelato. Thanks to Venice’s constant flow of tourists, we found no shortage of quality, creamy gelato and exotic flavors to cool us down and satisfy our sweet tooth cravings.

Discover more Italian sweet treats to eat in Venice and the rest of Italy.

Venice has a range of gelateria among its maze-like streets, gondolas and canals. Some are organic, some are both traditional and family-owned and some feel like old fashioned ice cream parlors.

With a tourist throng that never stops, the city seems to have gelato shops waiting around every corner. As a bonus, many of the best gelaterias are located near Venice’s best restaurants and cicchetti bars.

The Best Gelato in Venice

It’s easy to find great flavors when eating the best ice cream in Venice. Aside from pure fiore di latte, we enjoyed gelato flavored with lemons from Sorrento, pistachios from Sicily and the always tasty amerena cherries from Emilia-Romagna. The result is a delightfully creamy concoction with legendary flavors that never disappointed us.

In the scope of seven days, we ate enough gelato to narrow our favorites to five awesome Venice gelato shops. Based on our hands-on, spoon-to-mouth research, these are our picks for the five gelaterias scooping the best ice cream in Venice:

Gelateria il Doge disproves the concept of all gelato being equal with its Crema del Doge, a decadent gelato loaded with chocolate and candied orange. Open since 1986, the gelateria is a popular spot for gelato lovers seeking both exotic combinations and familiar favorites.

During our visit, we created a double-decker cone for the ages by topping rich, dark Cioccolato with a scoop of Crema del Doge. Splurging for a ricopeto cone covered with jimmies was a no-brainer. Even with the extra euro fee, the total cost of 3.80€ was a relatively small price to pay for gelato bliss.

Our cheap eats readers will be happy to read that a single scoop cone cost 1.80€ at the time of our visit. However, as a word of warning, you probably won’t want to stop at one scoop when you eat gelato at Gelateria il Doge. As always, prices are subject to change.

Located near the Rialto Bridge, SuSo stands out from the crowd with its slate of creative flavors. The gelateria’s featured flavor, Manet, includes salted pistachio and hazelnut. SuSo also offers flavors like seasonal Walnut & Fig and, in a nod to Venice’s place at the end of Asia’s silk road, the Oriental Express with caramel, ginger and cinnamon.

During our post-dinner visit, Mindi ordered Marostica, a stunning combination of pistachio and amarena cherry while Daryl opted for a scoop of Opera gelato made with Nutella and hazelnut. Which was better? We agree to disagree since we both think we ordered the night’s winner.

Pro Tip
Don’t be deterred by a long line at SuSo. The tiny gelateria is often crowded due to its prime Venice location.

We didn’t expect to find a gelateria called Alaska in Venice. The two destinations are literally halfway around the world from each other.

As we learned during our visit, the shop was previously a milk store and the gelateria kept the name as a nod to tradition. We also learned that Gelateria Alaska makes some seriously tasty gelato.

After consulting with scooper Roberto Menin about flavors like Tiramisu, Tumeric and Ginger, we ordered a creamy scoop of Pear gelato. Refreshingly tasty despite, or perhaps because of, its simplicity, we ordered a scoop of Fore di Latte for good measure.

With each scoop costing just 1.50€ at the time of our visit, eating the second cone didn’t break our bank. Perhaps we should have ordered a third.

Pro Tip
Buy a container of gelato to enjoy later in your room or apartment.

A popular Venice gelateria since 1982, Gelato di Natura channels the spirit of Marco Polo with its creative Michi desserts. Similar to Japanese Mochi, each Michi is a petite rice cake stuffed with chocolate, vanilla, green tea, strawberry or coffee gelato.

But, at the end of the day, gelato is the main event at Gelato di Natura. During our visit, we enjoyed a scoop of Amarena gelato, passing on creative flavors like Walnuts & Fig and Zuppa Inglese.

Noticing some similarities with SuSo’s flavors, we later discovered the overlap was no coincidence. As was the case with our gelato session at SuSo, we thoroughly enjoyed eating Gelato di Natura’s whisked, small-batch Italian ice cream.

Pro Tip
If you enjoy the gelato at Gelato di Natura in Venice, you can enjoy it again at the gelateria’s locations in China, Denmark and Ireland.

Gelateria Nico has been a Venice institution since Giovanni Causin opened the canal-side gelateria in 1935. The gelateria’s Gianduuito quickly became a local favorite due to its sundaes topped with generous amounts of chocolate, hazelnut and whipped cream.

Unlike the other gelaterias recommended in this guide, Gelateria Nico offers a sit-down experience that almost feels like an old-time American ice cream parlor, serving gelato in antique-style parfait glasses. And, since this is Venice, diners who sit on the expansive terrace can enjoy a view of the Giudecca Canal while they eat their gelato creations.

During our mid-afternoon gelato break, we savored a Frappé di Gelato made with milk, gelato and whipped cream. Adding amarena cherries for an extra euro was an obvious choice and one that we didn’t regret.

Pro Tip
Switch it up in the summer and order a dipped popsicle instead of gelato.

Is gelato good in Venice?

Most gelato in Venice is good. The gelato at our recommended gelato shops is great.

What is the best gelato in Venice?

While Gelateria il Doge is our favorite Venice gelato shop, the best way to answer this question is to taste them all yourself.

Where did Anthony Bourdain eat gelato in Venice?

Where did Phil Rosenthal eat gelato in Venice?

Phil Rosenthal ate gelato at La Boutique Del Gelato while filming his Venice episode in season two. This gelato shop has permanently closed since the episode aired on Netflix.

Where did Stanley Tucci eat gelato in Venice?

Stanley Tucci skipped Venice’s gelato shops when he filmed the first season of Stanley Tucci: Searching for Italy. You’ll have to rely on our recommendations instead.

Is gelato expensive in Venice?

No. In fact, most Venetian gelato shops are highly affordable.

Is tipping necessary in Venice?

What’s the best time to eat gelato in Venice.

This is a trick question since it’s always a good time to eat gelato in Venice.

Venice is bigger and better than we expected.

Taking a Welcome to Venice Walking Tour helped us familiarize ourselves with the city without getting overwhelmed. This tour includes a visit to St. Mark’s Basilica and a Gondola Ride. Other tour options include a Venice Food Tour and a Venice in a Day Tour.

Check out our gelato guides for Bologna, Naples, Rome and Verona for tips on where to eat the best gelato in other great Italian food cities. If you’re headed to Portugal, check out our Lisbon ice cream guide too.

Hi Guys. Being a bit (ok more than a bit) of a gelato nut myself. I think that your Venice suggestions need updating. I have also been on gelato hunting trips to each of your gelato city guides and you nailed most of them. However, you are missing Ca D'Oro, my top pick in Venice. Number two: Mella Verde. Santa Stae has moved up. Very good now. Susso I agree with. Nico, however, is well past its best before date. Mediocre gelato. Il Doge, around the corner from my favored hotel, also mediocre. I have had both a few times to confirm, and been disappointed. Alaska is interesting, great unique Rose flavor, and others. But I find his base too soft and runny. I always go, and am always wanting a better base to go with his great flavors. Keep up God's work. But go back to Venice and update. Ca D'Oro and Mella Verde deserve to be up there. And I suggest you drop Il Doge and Nico. If you need input on other places, I've put in the days and weeks, just like you. Regards