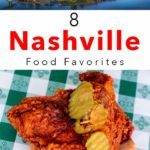 But what about the food in Nashville??? Don’t worry, this city doesn’t disappoint when it comes to eating and drinking. Whether you take a Nashville food tour or explore independently, you won’t go hungry during your visit to one of the country’s best food cities.

Discover the best fried chicken in America and beyond.

Biscuits may have originated in Persia but they were perfected in the American South.

We’re not talking about the original incarnation or the dessert version in London. Southern biscuits are fluffy, flaky buttermilk morsels that are more similar to scones than to cookies.

After you eat a biscuit, explore more iconic American food favorites you need to eat at least once in your life.

Where to Eat Biscuits in Nashville
Biscuit Love and Loveless Cafe

Pair your Meat and Three meal with sweet tea, a classic Nashville beverage. Also, don’t pass on fried green tomatoes if they’re on the cafeteria-style menu.

Where to Eat Meat and Three in Nashville
Belle Meade Meat & Three, Elliston Place Soda Shop and The Loveless Cafe

As great as biscuits are for breakfast, sometimes they’re not enough on weekend mornings after late-night shenanigans. For those mornings, Nashville has a thriving brunch scene fueled by throngs of transplants and tourists.

Do your research and save spontaneity for another meal. Once you sip your Bloody Mary cocktail and bite into your omelet, you won’t care about anything except the food on your plate.

Start your chocolate exploration with a tour at Olive & Sinclair in East Nashville. Not only will you learn about the company’s bean-to-bar method using stone mills, but you’ll also get to taste enough chocolate to find your favorite. Another option is to buy Colts Chocolates from Goldbelly if you want to do your exploration at home.

Donut lovers will not be disappointed in Nashville. A motivated visitor with a sweet tooth hungry for donuts will find it entirely possible to visit a different Nashville bakery every day of the week and eat enough flavors to achieve donut bliss.

Whether you want to stick with Barista Parlor or further explore the best Nashville coffee shops is up to you. Options include Crema Coffee Roasters and Sump Coffee among others. We also recommend our favorite Philadelphia coffee roaster Elixr which expanded to Nashville in 2021.

Whisky fans travel the world to drink the popular potent potable, but Nashville natives only have to drive to the nearest watering hole to drink locally-produced world-class whiskey. Tennessee distillers like George Dickel and Jack Daniel’s use sugar maple charcoal in a special Lincoln County Process to create the state’s liquid gold.

You can drink Tennessee whiskey at bars and restaurants all over Nashville. Feel free to drink it neat or add a mixer like cola or ginger ale.

Where to Drink Tennessee Whiskey in Nashville
Bars Around Town

Check out our picks for the best places to eat and drink in nearby Memphis. Then check out out our favorite Memphis things to do.

What is Nashville famous for in terms of food?

Nashville’s most famous food is Hot Chicken which was invented in the city. Other local favorites include biscuits and donuts.

Is tipping necessary in Nashville?

Yes. The standard tip at Nashville restaurants is 15-20%.

Is food in Nashville expensive?

Food in Nashville ranges from cheap eats to fine dining. In other words, you can eat for under $50 a day or blow it out and spend much more on fine dining experiences.

Where did Anthony Bourdain eat in Nashville?

What time do people eat dinner in Nashville?

People typically eat dinner between 7pm and 9pm in Nashville.

Are restaurant reservations necessary in Nashville?