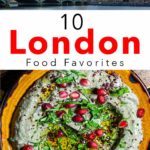 Are you wondering what to eat in London during your first visit to England’s exciting mega-city? Read on to discover ten must-eat London food favorites that you simply should not miss during your trip.

Whenever London calls, we answer.

London has an outstanding culinary scene with thousands of restaurants and markets in neighborhoods throughout the city. Ironically, the food in London had a bad reputation for much of the 20th century.

Well, that century is over and the secret is out about the quality of British food in general and London food in particular.

London is literally located in the center of the world with a food scene that reflects this position and makes it one of the world’s most exciting food cities.

London Food Guide | What to Eat in London

As one of the world’s true melting pots, London provides visitors the opportunity to eat every and any type of cuisine including Asian dishes, African delights and English specialties. Plus, those who prefer to drink their calories can imbibe from early afternoon until the pubs shut down at night.

With a little planning, you can eat well in London whether you have a day or week in the city. We recommend that you start your culinary exploration with the following London food favorites:

Londoners have been eating Fish & Chips for centuries ever since Portuguese Jews fleeing the Inquisition introduced the food staple to Britain. Popular as a cheap lunch or late-night snack, this London food favorite is as relevant today as it was more than a hundred years ago.

Expect to eat battered, deep-fried cod, hake or haddock and chips (think french fries but bigger and more rectangular) when you eat Fish & Chips in London, though some chippies, as Londoners call them, offer other fish varieties like mackerel and halibut.

Where to Eat Fish & Chips in London
Poppies in Soho, Spitalfields or Camden

Sunday Roast is another London food favorite that spans the centuries. Traditionally eaten after church on a Sunday afternoon with family, traditional Sunday Roast includes a variety of roasted meats plus sides like roasted potatoes and Yorkshire Pudding.

Sunday Roasts tend to be hearty meals best shared with friends. Food travelers in London can enjoy a proper Sunday Roast experience at gastro pubs and restaurants throughout the city. The key is to arrive hungry for the carnivorous weekend feast.

Where to Eat Sunday Roast in London
Blacklock in Soho, City or Shoreditch

London is a great place to start the morning with a Full English Breakfast. Filled with tasty treats like bacon, fried eggs, fried mushrooms, baked beans and black pudding, the traditional morning meal isn’t appropriate for vegetarians or calorie counters.

London hotels often serve the components of a Full English Breakfast as part of their morning buffet spreads, However, there’s nothing like ordering the meal from a menu and getting a ‘Fry Up’ served on one heaping plate.

Beigels have been popular in London since Jewish immigrants from Poland started baking them in the 19th century. Fast forward to the present and locals queue for beigels on Brick Lane at all hours of the day and night.

Boiled in water and baked at high temperatures, London beigels pair well with salt beef (think corned beef but sliced thicker) and smoked salmon. You can try both toppings since this London cheap eats meal won’t break your bank. Just don’t eat them on the same beigel.

Where to Eat Beigels in London
Beigel Bake on Brick Lane

Outside of India, London may be the best place in the world to eat Indian food. The city is filled with Indian eateries from humble curry houses to fancy restaurants with options ranging from traditional Indian cuisine to dishes more commonly eaten in India’s neighbors, Bangladesh and Sri Lanka.

You may want to start your London Indian food journey on Brick Lane where you can follow your nose and pick a great restaurant serving traditional Indian/Bangladeshi food. Another option is to take a self-guided Indian Food Tour and eat all the food. Better yet, go to one of London’s best Indian restaurants for a truly special meal.

Where to Eat Indian Food in London
Darjeeling Express in Soho, Restaurants on Brick Lane and Iranian-Indian Fusion Cuisine at Dishoom‘s Multiple Locations Around the City

London has restaurants serving all kinds of Middle Eastern food from countries like Israel, Egypt, Lebanon and Iran. Fans of the cuisine can eat food like falafels, hummus and fatoush salad at all hours of the day and night.

Though traditionally a London cheap eats staple, Middle Eastern food is available at swanky restaurants as well as at street food stands. This is a city where you can start your day with trendy shakshuka and end it with a kebab.

Where to Eat Middle Eastern Food in London
Honey & Co. in Fitzrovia, Ottolenghi (multiple locations) and Berber & Q in Haggerston

What are Scotch Eggs? In a nutshell (or should we say eggshell?), cooks coat sausage-covered boiled eggs with breadcrumbs and then fry them to create a crispy exterior.

London’s Fortnum & Mason claims to have invented the popular to-go item back in 1738. True or not, the tony department store is a great spot to try a Scotch Egg or two during a busy day of sightseeing. You can also buy Scotch Eggs at London markets and convenience stores.

Where to Eat Scotch Eggs in London
Fortnum & Mason in Piccadilly

Afternoon Tea is a highly civilized London tradition that dates back to the 19th century. The indulgent experience involves relaxing in style while enjoying silver pots of tea and tiered layers topped with dainty finger sandwiches and decadent desserts.

If your budget allows, splurge on afternoon tea at a fancy London hotel for the full experience. While you’re there, don’t skip eating scones with lemon curd and clotted cream. If you’re going to do afternoon tea in London, you might as well do it right.

Where to Experience Afternoon Tea in London
The Ritz in Picadilly, Claridge’s in Mayfair and Sketch in Mayfair

London is a beer drinker’s paradise. The city is filled with pubs serving traditional English beer classics like stouts, porters and brown ale. However, craft beer drinkers will find plenty of modern brews to wet their whistles.

For the full London beer experience, you’ll want to drink ales and lagers at historic public houses like Ye Olde Cheshire Cheese as well as more eclectic options at craft breweries like Beavertown Brewery. Consider taking a pub crawl if you want to try the preponderance of beer in London.

Where to Drink Beer in London
Ye Olde Cheshire Cheese, Beavertown Brewery and the Closest Pub

As much as London is a beer city, it’s also a hub for drinkers who savor creative, sophisticated drinking experiences. London cocktail bars serve it all from classic drinks to cutting edge concoctions.

You’ll find some of the best London cocktail bars in swanky hotels and in former restrooms. For the full London cocktail experience, you can even take a London Cocktail Tour in Soho.

Where to Drink Cocktails in London
Nine Lives in London Bridge, Disrepute in Soho, Ladies and Gentlemen in Kentish Town and The Cocktail Trading Company in Shoreditch

What food is London famous for?

London is famous for Fish & Chips and Sunday Roast. However, you can eat almost any cuisine in this global city.

Is food in London expensive?

Food in London ranges from cheap eats to fine dining. In other words, you can easily eat for well under £50 a day or blow it out and spend much more.

Is tipping necessary in London?

No. Gratuity is typically included in London checks. If not, a 10% tip is appropriate.

Where did Anthony Bourdain eat in London?

Where did Phil Rosenthal eat in London?

What time do people eat dinner in London?

People typically eat dinner between 7pm and 9pm in London.

Are restaurant reservations necessary in London?

Hungry for More in London?

Check out our picks for the best markets in London.

Blenheim Palace is not north of London, nor is it anywhere London. The Palace is at Woodstock a small way north of Oxford to the west. Your food article is misleading to say the least

We agree that Blenheim Palace is not in London. We included the photo for illustrative purposes and noted that the palace isn't in the city. We personally rented a car when we visited Blenheim Palace and assume that other people would do the same for a similar day trip.

I’m not that much of an internet reader to be honest but your blogs really nice, keep it up! I’ll go ahead and bookmark your website to come back down the road.