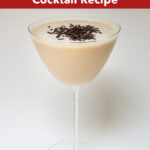 The mudslide is a creamy, dreamy cocktail that’s decadent enough to drink for dessert. Learn how to craft one at home in just five minutes.

The Mudslide cocktail is a fun guilty pleasure – a creamy, dreamy drink that’s super easy to craft without any special tool or skills. Once crafted, it tastes like liquid dessert.

But don’t be fooled. With three different liquors, this decadent dessert drink provides an alcohol kick that can’t be denied.

What Is a Mudslide?

If you’re new to Mudslides, you’re in for a wonderful experience that mixes coffee, chocolate and pure decadence. However, before we explain what a Mudslide is, let’s start with what it isn’t.

A Mudslide isn’t complicated to craft. It’s not vegan. And it isn’t particularly healthy.

Instead, a Mudslide is a decadently rich shaken cocktail thanks to three of its ingredients – coffee liqueur, Irish cream liqueur and cream. Vodka adds an extra kick to the equation.

Those who choose to add chocolate sprinkles take the creamy cocktail one step further. If you’re on the fence, we say go for it!

History of the Mudslide

Based on the over-the-top decadence of a Mudslide, you might think that the cocktail was invented in the US. You would be wrong.

You might also think that the Mudslide was invented in the UK since its creaminess rivals that of England’s Eggnog. You would be wrong again.

Surprise! The Mudslide’s roots trace back to the Cayman Islands. Legend has it that a clever bartender crafted the original Mudslide as a variation of the White Russian while working at the Rum Point Club’s Wreck Bar.

That mixology magic occurred during the 1970s. A half-century later, the island beach bar serves a version with cinnamon, a cherry, and a shot of Kahlúa. Bars around the world have their own versions as do we.

You can count the ingredients for crafting a Mudslide on one hand unless you’re counting ice as an ingredient. Then you’ll need two hands. An easier option is to read the following list:

If you’re lucky, you already have all of the necessary ingredients on hand. If not, you should be able to easily find them at a local market and/or liquor store.

The Mudslide has three liquors in its recipe – vodka, coffee liqueur and Irish cream liqueur.

We used Stolichnaya vodka since that’s what we’re currently pouring. However any vodka brand will work in this recipe.

The world’s most popular coffee liqueur and Irish cream liqueur are Kahlúa and Bailey’s Irish Cream respectively. We used both in our recipe but you can use your preferred liqueur brands instead.

How To Make a Mudslide at Home

Crafting our Mudslide cocktail recipe is both easy and fun to do at home. As a bonus, no special equipment is required. All you need are the following basic bar tools.

Don’t skip crafting this cocktail if you’re missing any of these tools. Get creative instead. For example, you could use an angled measuring cup instead of a jigger. While any glass will work, we recommend using a coupe glass if you have one.

The first step is to measure the three liquors. After you measure each, pour it directly into the shaker.

→ Click here to buy a Japanese jigger if you need a jigger or want an inexpensive upgrade.

The second step is to measure the cream and pour it into the shaker.

Pro Tip
Use milk or half and half if you don’t have cream on hand. Your drink won’t be as creamy but it will still taste divine.

The third step is to add ice to the shaker and vigorously ‘shake shake shake’. This step should take about 10 seconds or until your hands feel cold.

→ Click here to purchase a Boston Shaker from Amazon.

The fourth step is to strain the viscous mixture into a coupe glass.

Garnishing the Mudslide with chocolate sprinkles is an extra step that goes a long way. The tiny confectionary bits add both extra flavor and a decorative panache.

Fun Fact
Sprinkles are called jimmies in northeastern cities like Boston and Philadelphia.

We suspect that you’ll be thoroughly satisfied with our Mudslide recipe. However, feel free to try one or more of the following variations if you’re feeling adventurous: