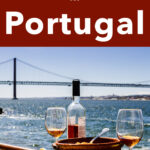 Discover five tasty cities in Portugal and our favorite things to eat in each city.

Portugal has long been a popular destination for sun seekers and budget travelers. However, in the past, it wasn’t a hot spot for food travelers who concentrated on food focused countries like France, Italy and Greece instead.

Those days are over. Portugal has recently become a media darling in periodicals like The Guardian, Los Angeles Magazine and Lonely Planet. And, like bees to honey, travelers of all ages and income levels are now flocking to cities in Portugal to sample the country’s many delights.

Sadly, many of these delight-seeking travelers, even the food-astute ones, don’t know what to eat and drink once they arrive.

This confusion happens in bigger cities like Lisbon and Porto as well as in smaller towns and villages. The Algarve poses similar challenges although the coastal region’s seafood bounty is practically impossible to miss.

During our initial Portugal trip in 2007, we managed to eat plenty of bacalhau (salt cod) and pasteis de nata but ended up at McDonalds when we hit a culinary dead end one night. Don’t judge us – it was our honeymoon after all. We also drank liters of vinho verde and even more ruby, tawny and white port wine as well as the occasional porto tonico cocktail.

Since moving to Portugal in 2019, we’ve made it our personal mission to eat like Portuguese locals. This mission is easy to accomplish since we’re legal residents of the country and have a Lisbon home base.

→Discover our Portuguese food favorites. Then read our guide showcasing the best Portuguese desserts and pastries.

We decided to add our dois cêntimos (two cents) about the tastiest Portuguese cities after reading seemingly sage advice written based on research instead of real life experience. Our goal is to steer our fellow food travelers in the right direction since life is too short to eat bad food in Portugal.

→ Check for updates as we visit and re-visit tasty cities in Portugal like Braga, Coimbra, Faro and Lagos.

Our Favorite Food Cities in Portugal

Living in Portugal, we have numerous opportunities to travel the country and often visit Portuguese cities and regions multiple times. And, just like we seek out the best food in Asia when we’re in that part of the world, our Portugal travels always seem to focus on food.

Lately, we’ve been fielding inquisitive calls, emails and messages asking our advice about where to travel within Portugal. With this elevated interest in mind, we’re now highlighting five of the best cities in Portugal for inquisitive food travelers.

In other words, don’t skip the following cities when you plan a Portuguese food trip:

We don’t know why the food scene in Porto is so excellent. Maybe it’s related to the city’s central role in the port wine industry. Or maybe the people in Porto just enjoy eating well.

The crazy thing is that Porto doesn’t just excel with one type of food. Porto’s food scene has many great options ranging from snack food to fine dining. On the top end, two restaurants in its metro region, Casa de Chá da Boa Nova and The Yeatman, have earned two Michelin stars.

Fun Fact
Portugal has 28 Michelin-starred restaurants. Seven have two stars while the other 21 have a single star.

Porto’s most famous dish, the francesinha, is a delicious heart attack on a plate. Most Porto joints smother the meaty, cheesy sandwich with a special tomato beef gravy and serve it with fried potatoes. But the francesinha isn’t the only sandwich worth eating in Porto.

It’s a true sandwich city where you can eat a pernil com queijo or bifana sandwich any time of the day or night unless you’d rather eat a cachorrinho, Porto’s take on the hot dog. It’s also a city that embraces traditional Portuguese food as well as modern culinary trends like brunch and vegetarian food.

→ Discover more food favorites in Porto as well as the Porto restaurants you don’t want to miss.

Most food travelers journey to Porto to drink port wine at the source.

While wine enthusiasts can drink port wine anywhere in the world, many dream of sipping the fortified elixir at port lodges in Vila Nova de Gaia. Just a short walk or drive from Porto over the Dom Luis I Bridge, Porto’s port lodges receive barrels of the exclusive wine from nearby Douro Valley before storing and aging it in massive wooden barrels.

→ Click here to schedule a port tasting and tour at the prestigious Graham’s Port Lodge. We did this tour during our first visit to Porto and highly recommend it.

Although Porto stole our heart, we decided to live in Lisbon based on the capital city’s larger airport and more cosmopolitan lifestyle. But, make no mistake, Lisbon has a thriving food scene that keeps us hopping.

In some ways, the Lisbon food scene is more exciting due to its cultural diversity. This is a city where adventurous diners can eat dishes more typically served in countries like Brazil, Southern India and Africa in addition to global favorites like dim sum, pizza and sushi.

→ Feeling overwhelmed? Get your bearings during a Lisbon food & wine walking tour.

The city has thousands of casual tascas (taverns) serving dishes like arroz de pato (duck rice) and bacalhau à brás (cod with cream and potatoes) as well as upscale restaurants serving elevated versions of these same dishes. Food travelers limited on time can taste many at Lisbon’s Time Out Market, located near the Cais do Sodré ferry station, during just one visit.

Lisbon is also home to Portugal’s most iconic pastry, the pastel de nata. Invented by monks almost two centuries ago. Pasteis de nata are available at pastelarias (pastry shops) all over town. However, it’s just a quick bus or uber ride to sample the original egg tart recipe at Pastéis de Belém.

Those who want to splurge won’t be disappointed during a visit to Lisbon. The city has nine Michelin-starred restaurants, including two with two stars – Alma and Belcanto – plus a few more in nearby Praia do Guincho and Sintra.

However, Lisbon has plenty of tasty cheap eats including bifanas (braised pork sandwiches) and frango assado (grilled chicken). The key is to skip touristic restaurants and eat like a Lisbon local instead.

A UNESCO world heritage city that dates back centuries, Évora is a popular Alentejo destination with Roman ruins still standing within its ancient walls and a chapel, Capela dos Ossos, literally built with human bones.

We toured these sites during our first visit and they’re awesome. However, we returned to Évora for two main reasons – the city’s hearty food and flowing wine.

You won’t be disappointed if you plan ahead and make reservations at one or more of Évora’s best restaurants. Instead, you’ll eat a plethora of unique dishes like sopa de cação (dogfish soup) and migas, a savory bread pudding, until you wave a white flag in culinary surrender.

→ Check back soon to discover our favorite restaurants in Évora.

Not only does the city have fantastic pastries like its iconic queijadas, but it also has access to a range of wines produced in its home region of Alentejo. A dry, arid region notable for its olive groves, cork trees and grape vines, Alentejo produces more wine than any other Portuguese region including Dão and the Douro Valley.

Drinking Alentejo wine is reason enough to plan an overnight visit to Évora. Renting a car is a must if you want to tour nearby wineries like Cartuxa as well as others like Ervideira and Sovibor in towns like Borba and Monsaraz. Trust us, you do.

However, you don’t need a car to enjoy a big bottle of red wine at one of Evora’s best restaurants. For that, you just need a credit card and a bed to roll into after dinner.

A popular holiday destination, the Algarve is far from a hidden Portugal gem. While beach bums swarm to Algarve cities like Albufeira, Faro, Lagos and Tavira, many mistakenly skip Olhão.

Located six miles from Faro, Olhão is just a boat ride away from several stunning beaches. It also has the Algarve’s largest fishing port, numerous seafood restaurants and the region’s most impressive seafood market.

Olhão’s two municipal markets are culinary treasure troves during the week. The fruit and vegetable market displays a wide variety of farm products and meats while the seafood market sells a stunning array of fresh catches including some of the largest prawns we’ve ever seen.

However, locals and savvy food travelers know that Saturday is the very best day to shop at Olhão’s markets. This is the day when the fish market has the best selection of sardines, octopus and clams. It’s also the only day of the week when Olhão’s massive outdoor market comes alive with a rainbow of local produce and chocolate-dipped churros fried to order.

We recommend spending a long weekend in Olhão. You’ll have ample time to explore the town, shop at its markets, dine at a few seafood restaurants and lounge on a nearby beach.

We also recommend staying at an apartment with a kitchen. Following this approach will enable you to fry up some fish and eat like an Algarvian local. However, we’ll understand if you leave the fish frying to the professionals.

Located just 19 miles from Lisbon, Setúbal is an easy day trip to plan whether you want to drive or take public transportation. It’s also a destination that warrants deeper exploration for those who like to pair natural beauty with world class cuisine.

Setúbal’s natural beauty is hard to miss. Top spots include Galapinhos Beach, Portinho da Arrábida Beach, Praia dos Coelhos and the protected Arrábida Natural Park. But what about the food?

Setúbal’s cuisine may be less famous than its beaches and parks but don’t count it out.

Food travelers will want to start their Setúbal exploration at the Mercado do Livramento Market. Dating back to the 19th century, Setúbal’s central market has been a fixture in its current location since 1930. It’s a great spot to shop for local fruits, veggies, meats and cheeses. However, in our opinion, observing stacks of freshly caught seafood is this market’s real draw.

Eating choco frito (fried cuttlefish) at a local restaurant is another must. Despite a name that evokes visions of chocolate, the hyper-local dish features fried finger-sized chunks of cuttlefish served with fried potatoes, fresh lemon and various condiments. We like to pair choco frito with local white wine. However dry white wine isn’t the best thing to drink in Setúbal…

While we were already familiar with the creamy, funky sheep’s milk cheese produced in Setúbal’s Azeitão, we were literally and figuratively knocked off our feet when we first visited an Azeitão winery. That initial visit was the first time we sampled fortified moscatel but it wasn’t our last.

Simultaneously sweet and potent, Portugal’s lesser known fortified wine is justification enough for to visit Setúbal in general and Azeitão in particular. It’s also a reason to return again and again.

→ Check back soon to discover even more reasons to visit Azeitão.

Check out tasty cities in Italy, the USA and the world.