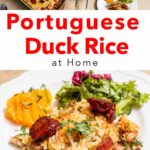 See what it’s like to cook Arroz de Pato, Portugal’s take on Duck Rice. We show you the process for making this Portuguese food favorite and share a tasty Arroz de Pato recipe so you can cook Portuguese duck rice in your own kitchen.

Portugal may be famous for savory dishes like Bacalhau a Bras and Caldo Verde as well as for sweet desserts like Pasteis de Nata. However, Arroz de Pato may be the coastal European nation’s greatest contribution to the food world.

The dish, which synthesizes all of its disparate ingredients into a harmonious whole, may even evoke some versions of risotto but without the Italian dish’s starchy sauciness. The starch in Arroz de Pato is more of a polymer-like building block in the dish than the star of the show.

Arroz de Pato was invented in Portugal’s northern city of Braga, but the savory duck and rice concoction is one of the most popular dishes in the entire country. Locals typically eat Arroz de Pato at home on Sundays or for special occasions. The Portuguese food favorite can also be found on restaurant menus throughout the slender Iberian nation.

Discover our favorite Portuguese foods as well as the country’s top food cities.

Although Portuguese people have been eating rice since Moorish settlers introduced the starchy crop to Portugal more than 1,000 years ago, historians typically attribute duck rice to China. Other countries like Singapore, Taiwan and Thailand also eat versions of duck rice in their local cuisines.

Portuguese people love rice and consume an average of 17 kilograms of the starchy grain each year. They eat rice on its own as well as in savory dishes like Arroz de Bacalhau (cod with rice) and desserts like Arroz Doce (rice pudding). However, Arroz de Pato very well may be the most iconic Portuguese dish featuring rice as a key element.

Since we love eating duck rice and now live in Lisbon, we jumped at the chance to learn to cook an Arroz de Pato recipe from Chef Ana Viçoso at her Lisbon Cooking Academy. The talented and experienced Viçoso teaches locals and tourists how to cook traditional dishes with Portuguese recipes at her bright, clean and modern cooking space at the end of a narrow, azulejo-adorned street in the corner of Lisbon’s Estefania neighborhood.

An accomplished chef, Viçoso opened the Lisbon Cooking Academy in Lisbon’s Estefania neighborhood in 2017. Along with Chef Assistant Rita Barbosa, Viçoso runs private cooking classes and workshops at the school. The chefs showed us how to shop, cook and eat this legendary dish.

Part of the fun of cooking Portuguese food in Lisbon is shopping at the city’s markets. We began our journey by sourcing ingredients at the Mercado 31 de Janeiro at in city’s tony, non-touristic Saldanha neighborhood. Renovated in 2014, this market is just a ten-minute walk from Viçoso’s school.

Inside the rectangular high ceilinged space, dozens of vendors sell fresh seafood, meat, fruits, vegetables, bread, cheese and more. The market is divided into two sections – produce and fish. On the perimeter, visitors can shop for items like Pão (bread) and Queijo (cheese) or at various Talho (butchery) shops.

Shopping with Chef Viçoso at the Mercado 31 de Janeiro was both fun and educational. During the expedition, she shared tips about seasonal fruits and vegetables like oranges (laranjas) and cilantro (coentro) while introducing us to the market’s best vendors.

We bought a whole duck, expertly butchered, from friendly talho António Matias and a loaf of rustic pão from Jaime Valente Fialho Neves. We also purchased bacon, chouriço and a variety of local produce from additional market vendors.

Though we didn’t buy and fish, we mingled with fishmongers who sold an extraordinary variety of fish including oval Peixe Galo (john dory), large tentacled Polvo (octopus) and inky Choco (cuttlefish). Before leaving, we gazed amazingly at the thin, dark, eel-like, black deep-sea scabbard fish that could only be found in Portugal.

Before we knew it, our shopping bags were filled with all the ingredients necessary to cook Arroz de Pato except one – long grain Portuguese rice. No worries, we secured a bag of Agulha (needle) rice at a local grocery store on our way back to the academy.

Pro Tip
Don’t be surprised if a Lisbon market vendor includes complimentary herbs when you shop at a Lisbon market. A produce vendor at Mercado 31 de Janeiro offered us a bunch of cilantro when we purchased carrots, oranges and onions at her stand.

Upon returning to the cooking academy, Viçoso put us to work in our temporary role as prep and line cooks. She had us slicing and dicing while she patiently demonstrated the process of preparing Arroz de Pato.

First, we prepared a simple, quick duck stock. After coating a big pot with olive oil, we added two quartered onions, big carrot chunks and orange peel along with half of the quartered duck.

We didn’t stop there and added cured chouriço, hot smoked bacon, leek chunks, water, salt, pepper, cloves, mustard seeds, cilantro, garlic and bay leaves. Once the pot was full, we stepped away and waited for the magic to happen.

While the stock cooked, we enjoyed an aperitivo break. During this break, we sipped crisp Portuguese white wine and nibbled on fresh cottage cheese and other Lisbon food delicacies from the market – olives, beans, bread and olive oil.

Back at work and 45 minutes later, Viçoso demonstrated her approach to shredding duck. According to Viçoso it’s important not to overcook the stock or duck would be too rubbery.

We created a refogado, a Portuguese base of flavor similar to the soffritos found in countries like Italy and Spain, by sautéing a range of finely chopped ingredients including garlic, onions, carrot and bay leaf in the bottom in a large, thick-bottomed pot. This refogado would provide the base of flavor to the rice.

No stranger to the kitchen, Daryl had fun while adding additional ingredients and stirring the pot. Within a few minutes, the glistening mixture’s aromas filled the academy’s kitchen.

Preparing the dish for a final cook in the oven, we added rice along with white wine before artfully arranged sliced choriço and bacon on top. Then we patiently let the mixture bake until it was done.

Close to the finish line, we sliced peeled oranges as we watched the timer slowly tick down to zero. Meanwhile, Viçoso assembled an impromptu salad to complete our Portuguese meal.

Before we knew it and just a few hours after we arrived at the Lisbon Cooking Academy, the Arroz de Pato was cooked and ready to eat.

Eating the finished dish was the highlight of our Arroz de Pato cooking experience. Both Viçoso and Barbosa joined us at the table, and we all admired the completed, hot-out-of-the-oven rice casserole.

At Viçoso’s suggestions, we squeezed the accompanying orange slices in order to give an acidic counterpoint to the rich, fatty duck rice and also sprinkled fresh cilantro for extra herbaceousness. We paired our finished Arroz de Pato with red wine to toast the successful cooking venture.

We smiled at each other after tasting the first bite and didn’t stop smiling until the last bites were gone. We all agreed that the Arroz de Pato was a tasty success.

This success went beyond duck rice. Not only did we have a fun day learning about and eating Portuguese cuisine, but we also made two new friends and acquired hands-on knowledge of Portuguese food. We also gained the Arroz de Pato recipe that we’re sharing below.

We’ll surely cook Arroz de Pato in our Lisbon apartment. Then again, we’ll cook this dish wherever we’re hanging our hats. This classic duck rice dish is a keeper!

Watch our YouTube video for more cooking tips and a few laughs.

Are you thinking about visiting or moving to Portugal?

We strongly suggest that you start learning European Portuguese now. Not only is it a challenging language to learn, but most apps teach Brazilian Portuguese.

We were thrilled to discover Practice Portuguese, an inexpensive system that makes learning European Portuguese fun.

Sponsorship
We thank Chef Ana Viçoso for hosting us at Lisbon Cooking Academy to facilitate this article. You can schedule your own cooking class with talented Chef Anna via the academy’s online booking system.

love this food and rice and duck yummmy