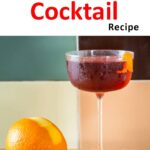 A Boulevardier cocktail is a Negroni crafted with bourbon instead of gin. Follow our easy recipe and craft a Boulevardier at home in just five minutes.

Bourbon cocktails speak to us lately. Perhaps it’s the nasty state of world events or the dreary, grey time of year. Maybe we just really like the taste of barrel-aged bourbon.

Our latest bourbon cocktail favorite is the Boulevardier, a drink made with just four ingredients plus ice. Fitting into our lazy mixology sweet spot, this drink is easy to craft in just a few minutes without any exotic ingredients or special bar tools.

What Is a Boulevardier Cocktail?

In simple terms, a Boulevardier cocktail is a Negroni crafted with whiskey instead of gin. In reality, this classic cocktail is so much more.

A grown up Negroni. That was Daryl’s initial and somewhat ironic reaction when he sipped his first Boulevardier cocktail. After all, there’s nothing immature about Italy’s Negroni. Maybe he should call it a Negroni with a doctorate degree.

But, yet somehow, replacing gin with bourbon makes the Boulevardier more sophisticated than its herbaceous cocktail cousin from across the pond. Bourbon flavors like vanilla and caramel combine with Campari’s fruity bitterness to create a drink that’s both complex and highly sippable.

History of the Boulevardier

Despite its similarities to the Negroni, the Boulevardier has a history that didn’t start in either Italy or the United States. Instead, the bourbon cocktail has roots in Paris, specifically at Harry’s Bar (no relation to the famous Venetian bar of the same name), during the roaring 1920s.

Cocktail lore has it that bartender/owner Harry MacElhone collaborated with customer Erskine Gwynne to create the Boulevardier. And the name? Gwynne published a magazine called Boulevardier at that time, a moniker that served a double purpose until the magazine ceased publication in 1932.

Meanwhile, the classic cocktail version is suddenly and slowly approaching its centennial birthday. As bourbon fans like us continue to discover the Boulevardier, it’s not going away any time soon.

With just four ingredients plus ice, the Boulevardier ingredient list is both short and sweet. As a bonus, these five items are all staples in most home bars around the world.

Don’t be misled by its colorful hue. The Boulevardier cocktail is a serious drink with three different liquors in its recipe. Similar to a Negroni, the first two liquors are bitter Campari and sweet vermouth. The third liquor is whiskey.

We like use Buffalo Trace, a solid, mid-price Kentucky bourbon in our recipe, so the end result is a Bourbon Boulevardier. If you don’t have access to this classic bourbon, other bourbon options include Bulleit, Four Roses, Knob Creek and even Jim Beam.

Campari is a complex liqueur that derives its herbaceous tones from 50+ secret ingredients that include bitter herbs, aromatic plants and fruit. Beyond the Boulevardier, it’s a key ingredient in Italian cocktails like the Americano and Garibaldi.

Buy a bottle of Campari from Drizly or Total Wine if you live in the US.

We use Italy’s classic Martini Rosso in this recipe. Other sweet vermouth makers include Carpano, Cocchi and Contratto.

Buy a bottle of Martini & Rossi Rosso Sweet Vermouth from Drizly or Total Wine if you live in the US.

How To Craft a Boulevardier Cocktail

Crafting a Bourbon Boulevardier with our recipe is both quick and easy. You probably already have all the ingredients and necessary bar tools – a jigger, spoon, strainer and mixing glass. If you’re lazy like us, you can use a shaker instead of a mixing glass.

The first step of the recipe is to measure and pour the the three liquors into the mixing glass or shaker. This step is literally the most difficult part of the recipe since you don’t want to spill any of the ingredients.

While many Boulevardier drink recipes contemplate equal parts of each liquor in a 1:1:1 ratio, our recipe includes two ounces of bourbon in a 2:1:1 ratio. This higher concentration of bourbon gives our Bourbon Boulevardier richness with less acidity.

The next step is to fill a mixing glass or shaker with ice and stir. The Boulevardier is a stirred drink and should not be shaken.

You’ll want to stir the Boulevardier until the liquor are combined and chilled. This step should take no longer than 30 seconds.

The last steps are to strain the drink into a coupe glass and garnish it with a simple orange twist. We like using a coupe glass for this cocktail since it looks elegant and is more conducive for sipping. However, you can alternatively serve the Boulevardier on the rocks in a lowball glass.

While we love the the combination of bourbon, Campari, sweet vermouth and an orange twist, you may want to tweak the recipe to your personal palette. If this is the case, we recommend starting with the following variations:

Order a jar of Luxardo maraschino cherries from Amazon if you don’t have a jar in your pantry.

There’s no going back. Once you craft a Bourbon Boulevardier at home, you may never make another Negroni. The only way to find out if you’ll feel this way is to make one yourself.