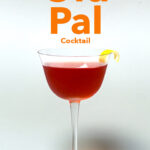 The Old Pal is a boozier version of the Negroni and Boulevardier. It’s also delicious. Craft one at home in just five minutes and find out if the Old Pal will be your new best friend.

You’re not crazy if you think that our Old Pal cocktail recipe seems familiar.

For one thing, this classic cocktail has been kicking around bars for a century. But that’s probably not the only reason…

This potent potable has boozy buddies (or should we say old pals?) that you probably already know. Those buddies are the Negroni and Boulevardier. We like to say they’re the Old Pal’s friends with boozy benefits.

What Is the Old Pal Cocktail?

The classic Old Pal cocktail is a boozy beverage originally crafted with equal parts of Canadian Club, Campari and dry vermouth. Over the years, this recipe evolved to replace Canadian Club with rye whiskey. Some mixologists, including us, have chosen to ramp up the rye, essentially changing the recipe’s ratio from 1:1:1 to 2:1:1.

A simple way to describe the Old Pal is a Negroni crafted with gin and dry vermouth. Yet another description is a rye Boulevardier with dry vermouth.

Yes, it would be easy to dismiss the Old Pal as derivative but the same can be said about most cocktails. The better plan is to imbibe an Old Pal while you debate its merits.

History of the Old Pal Cocktail

We’re not being cute when we say that the Old Pal is good friends with the Boulevardier. After all, both cocktails were created by Harry MacElhone, the iconic mixologist who owned Harry’s New York Bar in Paris and penned the equally iconic Harry’s ABC of Mixing Cocktails.

But what about Old Pal’s name? Cocktail lore reveals that MacElhone named the cocktail after his ‘old pal’ William Robinson. Robinson must have been a true blue friend to warrant this recognition.

Following the classic cocktail playbook, the Old Pal has just a handful of ingredients:

You’ll notice that the Old Pal’s three main ingredients are all liquor. Once you assemble them, you’ll be minutes away from meeting (i.e. crafting) your new best friend (aside from your dog).

Rye distilled in the USA is similar to American bourbon with one key exception – it must be distilled with at least 51% rye.

Rittenhouse Straight Rye Whisky is our go-to rye whiskey for two reasons. First, although it’s now produced by Heaven Hill in Louisville, Kentucky, its roots are in Philadelphia. Second, its spicy flavor is simultaneously complex and smooth. It has an ABV of 50%.

Campari is a complex liqueur that derives its herbaceous tones from 50+ secret ingredients that include bitter herbs, aromatic plants and fruit. Famous for being the primary Negroni ingredient, Campari is a versatile liqueur used to craft a myriad of cocktails including the Old Pal. It has an ABV of 25%.

Unlike sweet vermouth which is typically ruby red and produced in Italy, dry vermouth is white and has a French heritage. Most people have a bottle of the fortified wine at home since it’s a mandatory martini ingredient and, more often than not, that bottle is Italy’s Martini & Rossi.

We purchased a bottle of Noilly Prat dry vermouth since it’s from France instead of Italy. As a bonus, this dry vermouth’s recipe has 14 botanicals. It has an ABV of 18%.

Buy bottles of RyeWhiskey, Campari and/or dry Vermouth from Drizly or Total Wine if you live in the US.

How To Craft an Old Pal Cocktail

You don’t need any fancy bar tools to craft an Old Pal cocktail. We recommend using the following bar basics:

Don’t worry if you don’t have any or all of these tools. Each is inexpensive and you can improvise in a pinch if you don’t already own them.

The first step is to measure the rye whiskey, Campari and dry vermouth and pour each directly into a mixing glass. We like to use a Japanese jigger to ensure accurate measurements and make clean pours. Another option is to use a small angled measuring cup.

Add ice and stir with a bar spoon until the three liquors are combined and chilled. This step should take about 20 seconds.

Next, strain the cocktail into a coupe glass.

The final step is to garnish with a lemon twist.

It’s now time to discover if the Old Pal is your new best friend too.

We think you’re going to like our Old Pal recipe. However, we won’t be insulted if you want to broaden your cocktail circle by trying the following Old Pal variations:

What is the Old Pal cocktail?

The Old Pal is a classic cocktail crafted with rye whiskey, Campari and dry vermouth. It’s typically garnished with a lemon twist.

How is the Old Pal cocktail different from a Negroni?

How is the Old Pal cocktail different from a Boulevardier?

Where was the Old Pal cocktail invented?

The Old Pal cocktail was invented at Harry’s New York Bar in Paris.

What are the ingredients in an Old Pal cocktail?

Is the Old Pal cocktail shaken or stirred?

The Old Pal cocktail is stirred, not shaken.

What type of glass is best for the Old Pal cocktail?

Will the Old Pal cocktail be your new best friend?

We can’t answer that question. You’ll have to craft and drink the cocktail yourself to answer this question.