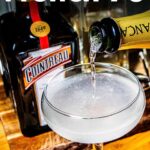 Are you craving a sophisticated cocktail made with gin and champagne? If so, try our classic French 75 recipe with Cointreau added for balance and an extra punch. You can make it at home with just five ingredients plus ice.

Maybe you love gin and maybe you don’t. It doesn’t matter when it comes to the French 75, a cocktail that features both gin and champagne. Adding fresh lemon juice and simple syrup transforms the potent potables into an effervescent sipper that’s fun to drink regardless of your affinity (or lack thereof) for gin.

As for us, it was love at first sip when we drank our first French 75 cocktails at Luke in New Orleans back in 2013. Little did we know that we’d eventually savor classic French 75 drink in Paris where they were invented and later make them in our adopted city of Lisbon.

Based on research, both online and in the kitchen, we’ve adapted a recipe for French 75 cocktails that’s as easy to follow as it is to drink. We craft our version of the sophisticated sipper to our personal taste by adding Cointreau to deepen the flavor. The result is a classic cocktail that you’ll want to drink again and again.

What is a French 75 Cocktail?

You’ve probably sipped a French 75 before but do you know the French 75 history?

Although versions of the bubbly cocktail date back to the 19th century, the numeric name doesn’t emanate from a year like 1875 as you may guess. Instead, the drink’s unlikely namesake is the French 75 field gun used during World War I – a weapon equally as powerful as the gin and champagne cocktail. Kapow!

In simple terms, a French 75 is a champagne martini. You can order one in France by asking for a Soixante Quinze (Seventy Five) though most bartenders will understand the English translation.

For many years, the French 75’s popularity was specific to France where barflies drink the French cocktail in champagne flutes and coupe glasses. The sophisticated sipper jumped the pond decades later, achieving popularity in New York City before spreading its wings to lounges and hotel bars across the US.

Buy The Cocktail Companion. You can explore cocktail history with this book or online. It’s interesting stuff.

How to Make a French 75 Cocktail

Making a French 75 is easy. You don’t need to take an expensive mixology class to craft this tasty tipple. However, you will need a cocktail shaker, jigger and strainer for best results.

Once you have the right tools as well as the necessary ingredients, you’ll be ready to shake your way to France without leaving your home kitchen.

Despite the fizzy cocktail’s luxurious reputation, the ingredients in a French 75 are quite simple starting with gin and champagne. Our recipe adds Cointreau liqueur for an extra kick that rounds out the cocktail’s flavor profile.

Buy a bottle of Cointreau from Drizly or Total Wine if you live in the US.

We use Bombay dry gin at home but any good gin will work well in the recipe. Simple syrup, fresh lemon juice, lemon peel and ice complete the French 75 ingredient list. However, you can adjust the ingredients in various ways.

Pro Tip
Make simple syrup at home by boiling equal parts of water and sugar in a saucepan.

The most obvious French 75 variation is to use cava, prosecco or another dry sparkling wine instead of champagne. Since we live in Lisbon, we typically use a Portuguese sparkler that’s readily available at local markets and liquor stores.

Despite this variation, the drink retains its ‘Frenchness’ thanks to the addition of orange-flavored Cointreau. If you don’t have Cointreau on hand, you could use Grand Marnier or a citrus-flavored triple sec instead.

If you have all the ingredients except champagne – voila – you can make a Tom Collins. If you’re out of gin, you can make a French 75 with vodka or whiskey. Those two variations are known as French 76 and French 95 respectively.

Other options are to use brandy or cognac like they do at bars in New Orleans and juice from a lime or blood orange instead of a lemon. Alternatively, you can add elderflower syrup or fresh mint to create an un-classic French 75 martini.

The French 75 is an elegant cocktail that you can enjoy as an aperitivo with nuts or a cheese plate. You can also pair it with eggs benedict or waffles for a ramped-up brunch. First, though, we recommend mastering the classic French 75 by following our easy recipe.

The French 75 is a champagne martini

Where was the French 75 invented?

The French 75 was invented in France?

Where did the French 75 get its name?

What are the ingredients in a French 75?

Is it necessary to use champagne in the French 75 recipe?

No. You can use cava, prosecco or another dry sparkling wine instead of champagne.

We like to use French dry gin but any dry gin will work.

Is the French 75 shaken or stirred?

The Last Word is shaken, not stirred.

What type of glass is best for the French 75?

One of my very favorite drinks. I really love the idea of using Cointreau! I don't like it too sweet so I omitted the simple syrup. I usually use agave to keep it as a low glycemic index but wow Cointreau is so tasty with the Gin and Sparkling wine.

Like you, we're big Cointreau fans and love it in this drink. Cheers!

As great as this is the original and "classic" recipe calls for cognac as given by the I.b.a everything else seems to be pretty spot on though. GIN has become the most associated spirit for a French 75 however, Cognac adds depth and layers.