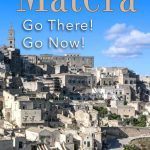 Matera, a stunning city in Basilicata Italy, is rich with history, cave hotels and tasty Italian food. The time to visit Matera is now.

Have you heard of Matera? If so, did you ever visit Matera?

Probably not if you’re an American. Most Americans who travel to Italy visit the Italian trifecta of Rome, Florence and Venice. Don’t get us wrong – these are all world-class cities as well as top Italian food cities.

But there’s so much more to Italy than those popular cities to the north. As an example, Naples is the home of pizza, Neapolitan pasta and other edible delectables. And then there’s Matera.

We entered Matera in search of our hotel after a long day of travel. At first glance, Matera looked like any small Italian town with churches, small boutiques and a strolling array of citizens enjoying the nightly passeggiata.

Before we parked our rental car, Daryl dashed down a stairway searching for our small cave hotel. After finding the entrance to Antico Convicino, he returned to the idling car and a skeptical Mindi who was starting to think that the visible town center was all there was of the ancient town.

Daryl laughed as he led her down the undulating stairway of thousand-year-old stones that revealed the ancient cityscape of converted cave dwellings also known as Sassi for the first time. Mindi quickly changed her mind.

What To Do in Matera

We were drawn to visit the city that was named a UNESCO World Heritage Site in 1993. We had first heard about Matera in Italian cookbooks not to mention the visually stunning (despite its subtext) Mel Gibson movie The Passion of Christ.

Based on the food and the movie’s scenery, we just had to visit Matera. During our visit, these were our favorite things to do in Matera:

It hit us as we were exploring Matera the next morning. The city truly is a photo opportunity at every angle. The hilly landscape provides vista after vista. With or without Matera maps, the cave dwellings provide surprise after surprise.

Ironically, the glorious city has a storied past. Until the 1950’s, Matera was a wretched place – a sort of Italian Gulag where political prisoners were sent to live in the dreary sun-scorched desolation of rocks and stone.

Today, in an odd and imaginative twist, gentrification has transformed the previously impoverished colony into a landlocked Mediterranean paradise filled with boutique hotels and charming restaurants. The renewed city also brings tourists of all ages, even the hipsters.

The Matera landscapes and skylines are breathtaking, filled with a craggy mosaic of spires and uneven rooftops. It’s especially gorgeous at dawn and dusk as the sun breaks over the stone-filled Sasso center. The opportunities for awesome Matera pictures are endless.

Tour buses only travel through the town for a few hours a day. Sightseeing crowds are generally gone by early afternoon and it’s easy to find solitary landscapes among the stony desolation. There is no shortage of spots for a peaceful moment for reflecting on Matera’s vivid past and present.

Pro Tip
When walking through Matera, be sure to carry a fully charged camera and a wide-angle lens. The city is a living time machine. As you walk through its dense, narrow passageways, you will surely be in awe at each twist and turn, and you will literally want to click your camera at every step.

We didn’t choose Matera for its food scene, but we were pleasantly surprised by the great dining options in the city of caves. When we visited some of the best restaurants in Matera, we found homey, simple Italian food with deep flavors built around the classic Italian concept of Cucina Povera – the idea that great food is built on ingredients that are cheap, accessible and local.

Along with wonderful bread and charcuterie, the Lucanians in Matera make extensive use of mild sun-dried chili peppers that impart deep earthy flavors to much of their cuisine, especially the brilliant handmade cavatelli and orecchiette pasta.

Wondering where to eat in Matera? We found great Matera food at family-run restaurants like Trattoria del Caveoso, a casual trattoria that we stumbled upon while wandering around town on our first night.

We savored the cavatelli con pepperoni cruschi with its crunchy dried Lucani peppers, ricotta salata and fried breadcrumbs in the dimly lit cavern (a repeated theme in Matera) filled with colorful a mix of locals and tourists. We washed the hearty food down with a bottle from the restaurant’s affordable list of local Basilicatan and Puglian wines.

This is the type of restaurant that deserves a second visit, and we enthusiastically obliged. Yes, we ate at Trattoria del Caveoso twice during our time in Matera.

Pro Tip
The charcuterie in Matera is second to none. When you eat at Trattoria del Caveoso, be sure to try the lonza. Their take on the cured pork loin is as buttery as sushi.

We never thought we would taste better gelato than the gelato that we enjoyed in Northern Italian cities like Bologna, Rome, Venice and Verona, but Matera came close. Our favorite gelato was the organic (biologico) gelato served at trendy Lounge Caffè. The nutty pistachio and chocolate cherry flavors and creamy textures were spot-on.

As if the ancient city with its caves isn’t enough, Matera is situated over a ravine. This topography makes the city perfect for hiking and exploring.

The bend of Matera’s main road through the Sassi empties into the Parco della Murgia Materana, a mini Italian version of the Grand Canyon, where adventurers can rock climb and less adventurous travelers can hike through many of the cities nearby ravines which wind through a network of caves, picturesque hills and peaceful streams. (We fell into the latter category.)

Beyond these sites, Matera has a slew of cute stores where local artisans sell crafts, art and jewelry. While shopping, we bought pasta and dried peppers since local food products are some of the best souvenirs to buy in Italy.

Despite the many fun things to do in Matera Italy, one can only explore so much in a day. Luckily, Matera has plenty of cafés for chilling out and enjoying a drink or two.

Then again, drinking a bottle of wine on a Matera hotel terrace looking out on the city is the ultimate chill-out experience. After a busy day doing a city tour, this is the ultimate way to partake in local Italian culture.

Pro Tip
Go to Il Buongustaio for wine, cheese and charcuterie. You can purchase all necessary provisions for a memorable picnic. Then go back to the shop later to buy edible gifts to take home for friends, family and yourself.

Why You Should Visit Matera Now

Without a direct train line to Matera, the city has a delightfully non-touristy vibe. This situation won’t last forever since Matera was designated a 2019 European Capital of Culture along with Plovdiv. With this distinction, it’s inevitable that crowds will come in droves.

There are tourists in Matera now, but not too many, with most coming and leaving by bus long before the sun sets. As more and more cave hotels are built and with people like us spreading the word, Matera will rival the popular northern cities in terms of tourism.

The Matera experience will still be special but less so, as happens when a place is crowded with tourists. In other words, now is the time to visit Matera.

Matera is not the easiest Italian city to visit since it’s not on a train line. We recommend renting a car and driving to Matera from Naples, which is what we did.

The drive is under four hours and can be modified to include stops along the Amalfi Coast or in Basilicata. Another option is to take a train from Naples to Bari and then a bus from Bari to Matera. However, the Bari Matera bus line has limited service.

Pro Tip
Map out a parking lot before you arrive in Matera since driving in the city can be confusing.

When to Visit Matera

Don’t wait to visit Matera! As you can tell, we loved visiting this Southern Italian city and recommend a visit before it explodes with tourists.

Like much of Europe, the best times to visit are during the shoulder seasons of spring and autumn when the weather is optimal and crowds are smaller.

Eating in Italy is fun! Check out our food guides for the Italian cities of Bologna, Florence, Modena, Naples, Parma, Rome, Venice and Verona as well as our guide to the country’s best desserts.

I’m in Matera right now. It’s neat and all but not worth more than 1 full day of your time (2 MAX). The Sassi looks neat but that’s it. Really bored on day 3 in our cave hotel which was the highest rated and most costly. The neat factor wears off very quickly, but I’ve been everywhere.

I was born in Matera and now live in US. I go back for summer and Christmas. Anytime of the year is great for me. Looking at the Sassi covered with snow is astonishing. Thank you for sharing your thoughts and pictures about my beautiful hometown! Thank you!!

To the author - Actually, Matera(Italy) and Plovdiv(Bulgaria) are the European Capitals of Culture for 2019, for the whole contitent Europe, not just Italy or Bulgaria. The article is interesting, but this part of the information is inaccurate.

Thanks for your comment. We have updated the article to make this information more clear.

I have a doubt. When does Matera close? I can't find informations about opening and closing times. Is there a seasonal closure ?

It's a real town. It never closes.

Matera was not a gulag in the 1950s, more of a ghetto as the people were so poor they couldn't afford houses so had to live in dwellings hewn out of the hill. Their animals were kept there too!