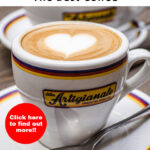 A new cultural renaissance is brewing in Florence but this one doesn’t involve art or politics. But It does involve culture – in this case, coffee culture. Read on to learn about Florence’s 21st century coffee revolution and where to drink the best coffee in Florence.

Travelers don’t have to look hard to find culture in Florence.

Stunning art and epic architecture fill the city, with pieces created by Michelangelo, Botticelli and DaVinci on display in galleries, museums and churches. But Florence isn’t just a fantasy land for culture vultures. A stroll through the city reveals an exciting history that’s still evolving.

The city’s coffee culture is an entirely different matter. Unlike Florence’s leading role in the 15th century renaissance, the Italian city was slow to embrace coffee’s third wave. In fact, we couldn’t find any specialty coffee shops in Florence during our original 2009 visit and not for lack of trying.

As it turns out, we were five years too early.

In 2014, Ditta Artiginale started serving lightly roasted, single-origin coffee in the heart of Florence. Though we had heard rumors of this development, we didn’t believe it until we saw and tasted the roaster’s arabica beans for ourselves in 2018.

Although we were only in the city for one day as part of a collaboration with Cesarine, we squeezed in an early morning coffee break. After a few sips of our expertly crafted flat whites that we paired with excellent cornetti, we we were believers. We were also well caffeinated.

Fast forward to the present and Ditta Artiginale is still going strong. Florence’s third wave coffee pioneer now has locations on both sides of the Arno and it’s not alone. Both D612 Coffee Roasters and Gearbox Coffee Roasters are roasting great coffee that food travelers can drink and purchase in select Florence cafes.

The question is no longer if Florence has modern coffee at some of its cafes. Instead, it’s where you can find excellent single sourced grounds.

Elephant in the Room
We would be remiss if we didn’t mention that Starbuck opened its first Florence location in April 2021. The global coffee shop is located at I Gigli Campi Bisenzio, approximately a half hour drive from Florence’s city center.

If you’re wondering where you can drink the best coffee, wonder no more. These are our favorite spots for drinking espresso drinks and pour overs in Florence:

Since it single handedly transformed Florence’s coffee culture when it opened in 2014, it’s fair to call Ditta Artiginale a renaissance coffee enterprise. The company’s impact is nothing short of revolutionary in a country that’s been drinking a certain style of darkly roasted coffee for centuries.

We can only imagine the reaction the cafe received when it introduced a menu featuring both traditional café (i.e. espresso) and modern pour overs.You want how many euros for a cup of coffee??? But almost a decade later, the city that embraced Michelangelo’s David has done the same with Ditta Artiginale and its roster of modern coffee drinks.

Ditta Artiginale’s owners pride themselves on being different. Part of this difference involves roasting single-origin beans sourced from independent coffee producers around the world. Another difference is the cafe’s hipster vibe in a friendly space located mere blocks from Florence’s majestic Duomo.

That’s all well and good but how is the coffee? In one word, it’s solid. We’ve enjoyed drinking Ditta Artiginale’s coffee in Florence as well as at Ventimetriquadri in Naples and Italala Caffè in Vilnius.

Update
The Ditta Artiginale team has been busy since the pandemic. They opened a third cafe with a coffee school in the Sant’Ambrogio district in July 2021.

And then there are Ditta Artiginale’s selection of Italian pastries. We can’t think of a better way to start a day in Florence than with a beautiful cornetto or bomboloni paired with a flat white to match.

Pro Tip
Don’t skip Ditta Artiginale if you’re not in the mood for coffee. The cafe offers a range of other beverages including hot chocolate, negronis and a dizzying array of gin cocktails.

It only makes sense that our favorite Florence coffee shop has ties to both America and Australia. After all, these two countries are leaders in coffee’s third wave movement.

But make no mistake – this isn’t a generic coffee shop. Instead, Melaleuca, located in Santa Croce, just steps away from the Arno, represents the new Florence. It just so happens that married owners Marco Cappelliari and Chloe Guest spent their formative years in Gainesville, Florida (USA) and Cairns, Australia before settling in Florence, Cappelliari’s home town, and opening Melaleuca in 2019.

Ironically, the beans are the reason we visited Melaleuca’s in the first place. The cafe’s name popped up while we were researching where to drink D612 coffee in Florence. And that first visit to the wasn’t our last. After enjoying an outrageously tasty cinnamon bun and two skillfully prepared flat whites, we returned a few days later.

Pro Tip
Adventurous coffee drinkers will want to order magics at Melaleuca. Invented in Melbourne, the Australian drink is essentially a double macchiato.

Brunch was in order during our second Melaleuca visit and not just because the cafe was out of cinnamon buns. Our primary goal was to enjoy an American-style brunch which included pancakes and nduja chili eggs piled atop flatbread.

If you’re wondering if Melaleuca serves avocado toast, the answer to this rhetorical question is yes. As previously noted, the owners are one half Australian.

SimbIOsi Organic Cafe & Lovely Bistro lives up to its name.

Not only does this tiny cafe focus on organic products, but its also a lovely bistro with vintage furniture, antique lamps and bare stone walls that invites people to linger over their coffee and light bites. The key to a good time in this hip “bistro” is to snag one of the few tables or bar stools.

While SimbIOsi offers a diverse menu that includes food and cocktails, we specifically sought out the cafe for its locally roasted coffee menu. The cafe was serving a selection of D612 coffee at the time of our visit.

During that visit, SimbIOsi’s coffee list was succinct with just nine items. But those nine items included all of our favorites including cappuccinos, flat whites and cold brews. We chose flat whites in our quest of a creamy jolt of joe.

Sipping those flat whites was a respite during a week of intense food tripping. SimBIOSI’s atmosphere felt completely of place while the coffee was as good as cups we’ve enjoyed in cities like Cape Town and Portland. But, at that moment, there was nowhere else we would have rather been.

Pro Tip
Pop over to My Sugar for gelato after you get your caffeine fix at SimBIOsi. The excellent gelateria is just around the corner.

We initially walked past Coffee Mantra in our haste to get to Mercato di Sant’Ambrogio. That was a mistake that we rectified once we realized that the jewel box of a coffee shop is the best place to drink locally roasted Gearbox coffee in Florence.

Located in Borgo San Lorenzo, Gearbox is one of three excellent coffee roasters in Florence. The others are Ditta Artiginale and D612. At the time of our most recent visit to Florence, Coffee Mantra was the only cafe in Florence serving Gearbox beans.

After drinking classic cappuccinos crafted with ultra-fresh milk during our initial visit, we decided to try milk-free filtered coffee the second time around. It was a good decision and one that we will likely repeat when we return to Florence.

Pro Tip
Enjoy your coffee at an outside table with a front row view of the bustling neighborhood.

Although Torrefazione Piansa has been roasting coffee beans since the 1980s, the roaster officially joined the Florence specialty coffee scene when it opened Caffè Piansa in 2016. By the time we visited Florence four years later, the cafe operated like a well-oiled machine with its original barista still pulling espressos and making pour overs.

Unlike other Florentine roasters, Piansa combines beans in mixes ranging from equal amounts of arabica and robusta beans all the way up to 100% arabica. The roasting operation sources its beans from countries like Brazil, Colombia and Kenya.

Although you can sample Piansa’s beans at other Florence cafes, the better move is to visit the dedicated cafe in the city’s Beccaria neighborhood, east of the city’s center. We completed this mission on our final day in Florence.

Tempted by a case filled with paninis and cornettos, we saved our appetite and simply ordered filtered coffee. The cafe offers both Chemex and V60 extraction methods. We opted for the latter. It was a good choice.

Pro Tip
Complete your visit to Caffè Piansa with a lampredotto panino at nearby I Trippaio Fiorentino. The tripe sandwich stand is just a two-minute walk from the cafe.

Our journey to explore the Florence coffee scene went full circle when we crossed the Arno. This is where we found Ditta Artigianale Oltrarno, the second location opened by the city’s original specialty coffee shop.

You may be wondering why we gave this shop a separate entry since it has the same owners and similar menu to the original Ditta Artiginale. Let us explain…

Of course the coffee is good at Ditta Artiginale Oltarno – that’s a given. But this cafe location stands out for its beautiful two-story space that features a sleek design and expansive terrace. More than a coffee bar, this cafe offers extras like special tea infusions and morphs into a gin bar at night with its own gin still.

Pro Tip
Weather permitting, sit outside when you sip an afternoon flat white or pour over at Ditta Artiginale Oltarno.

Thirsty for More Coffee in Europe?