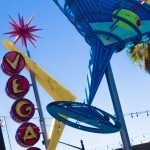 A visit to Las Vegas is incomplete without a trip to Downtown Las Vegas. Just a few miles from the strip, this historic neighborhood is rapidly gentrifying and is well worth a visit now.

Old neon signs illuminate walls that are freshly decorated with new street art. In other words, Downtown Las Vegas is a neighborhood in transition.

During our recent trip to Las Vegas, visiting downtown was at the top of our list of things to do. We wanted to check out the changing urban center before it becomes completely gentrified like so many cities around the world.

The city of Las Vegas can trace it’s origins to downtown, with Fremont Street at its center, to 1905. Casinos thrived here before Bugsy Siegel built the Flamingo four miles away on what is now the Strip, and it’s where cowboy Vegas Vic has been smiling, shining and swinging his iconic neon boot since 1951.

Despite having operating casinos and restaurants over the years, Downtown Las Vegas was a run-down afterthought for decades. This situation changed in 1995 when the Fremont Street Experience began lighting up the downtown epicenter each night.

More recently, Zappos, the popular online shoe company, moved from the suburbs making Downtown Las Vegas a destination for both locals and tourists.

It’s no secret that there are lots of things to do in Las Vegas, at least on the strip. But what about downtown Las Vegas?

Renovated hotels, new restaurants and cultural sites like The Smith Center for the Performing Arts, the Mob Museum and the Neon Museum are now transforming the area at lightning speed, making a trip to downtown Las Vegas a must for any visit to Sin City and a great stop on any US road trip.

We recently explored downtown Las Vegas and found plenty to keep us busy for a day.

Not surprisingly, our personal exploration of downtown Las Vegas focused more on the food than on culture.

Our local guide made Las Vegas history come alive as she walked us around the downtown grid, alternating our time between historical stories and food stops at several local eateries. We tasted foods ranging from beef jerky to hummus to artisan chocolates.

During the two-hour tour, we learned that there’s a heck of a lot more to the Downtown Las Vegas food scene than the infamous Heart Attack Grill.

You can book a Downtown Las Vegas Food Tour here. We thank Viator for hosting us on the tour to facilitate this article.

Dubbed the “Rock ‘n’ Roll Chef” by Rolling Stone Magazine, Chef Kerry Simon honed his skills on the Las Vegas Strip where he ran successful restaurants like Simon at the Palms Casino. We previously enjoyed his festive pajama brunch at Simon several years ago.

For his downtown spot, Simon and his team created a fun menu of burgers, sandwiches and chef-driven snacks like lamb gyro tacos – a Mediterranean Mexican mash-up made with grilled flatbread and seasoned lamb. Our favorite dish was the crispy chicken skins.

Brined overnight and fried to order, the skins may not be particularly healthy but they truly are a taste sensation, especially when dipped in the smoked honey that comes on the side.

To us, Carson Kitchen represents all that we look for in a restaurant.

The condensed space has a sleek look with its open kitchen, wide bar and outside patio. It’s crowded enough that we had to return for a Friday lunch after finding the restaurant too busy to accommodate us on a Thursday evening. We’re glad that the crowds didn’t deter a second trip.

Pro Tip
Lunch is a good option for Carson Kitchen since the restaurant has a limited reservation policy. Reservations are only accepted for parties of six or more.

We have never before seen anything like the Downtown Container Park. The park is made entirely of new and repurposed shipping containers of varying sizes that are attached and stacked together with shops, restaurants and even a water slide.

At night, the park adds music entertainment to the mix. The mall concept is familiar, but the container construction makes the space fun and unique.

Since it was over 100 degrees in the shade, we enjoyed refreshing blackberry lemonade popsicles. Even in the heat, walking around the Downtown Container Park is one of the best free things to do in Las Vegas.

To our surprise, just south of the Fremont district, Las Vegas has a vibrant art scene spanning 18 city blocks.

The epicenter is The Arts Factory, a funky warehouse with a myriad of art galleries and shops. The art ranges from affordable pop culture to experimental photography with so much to see we could have easily spent a day wandering and chatting with the local art dealers.

For us, the only bummer was that we were there on the fourth Friday of the month. We need to schedule our next Las Vegas trip to coincide with the monthly First Friday celebration put on by the artistic community. We hear that it’s quite a party.

From the early 1950s until 1962. the military conducted nuclear tests at the Nevada Test Site, just a 100-mile drive from Las Vegas. Try to imagine a day gambling, catching a show and then, as a nightcap, observing a momentous nuclear event from the roof of a local bar. One such bar is Atomic Liquors, the oldest free-standing bar in all of Las Vegas.

At first glance, Atomic Liquors is strictly old-school with a retro jukebox and art featuring mid-century stars. But the decor is just part of the story.

Most of the barstools are occupied in the afternoon, and the tattooed bartenders serve up a full selection of craft beer and cocktails. This is clearly a bar that celebrates Sin City’s quirky history while embracing current trends.

Atomic Liquors provides a piece of Americana, like most of Downtown Las Vegas, that we should never forget and continue to celebrate.

Hungry for More in Las Vegas?

Check out our Las Vegas Food Guide for more great food and drink options off the strip.

Sponsorship
We thank Viator for hosting us on the Downtown Las Vegas Food Tour to facilitate this article.

I go to Vegas a lot and have eaten at most of these places. Raku and Lotus of Siam are always on my restaurant list. I have to add one more "off the strip" rec. It is near Chinatown too. Called EDO Gastro. Check it out.

I’ve been to Vegas a of times a year for the last ten years. I love staying downtown, but never knew about any of this.. when I go in April I will have a whole new adventure.

Oh my gosh how is it that I've been to LV dozens of times without discovering these taste bud explosions?! Thanks for the tips!

When I was last in downtown Las Vegas they were in the middle of the regeneration process so I would love to go down and visit and see what it's like now. And those burgers look awesome!