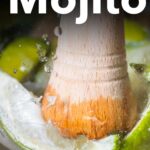 Our Bacardi Mojito recipe is ideal for summer. You can whip up this Cuban cocktail favorite at home with just five ingredients plus ice.

We adore Cuban cocktails like the Daiquiri, Cuba Libre and Mojito. Especially the Mojito.

We’ve imbibed the popular rum drink in four continents so far but, ironically, not in Cuba. Alas, we have yet to visit the Caribbean island just 330 miles from Miami.

It’s no secret that Cuba is a difficult destination for Americans. Visas are next to impossible to secure and travel restrictions abound between the two countries.

Hopefully we’ll get to Cuba one day. Until then, we can scratch our cocktail itch by drinking Mojitos at home and at bars around the world.

According to Merriam-Webster, a Mojito is “a cocktail made of rum, sugar, mint, lime juice, and soda water.”

Simply put, drinking a Mojito is like drinking a tropical island in a glass. The rum cocktail is an ideal summer sipper with a bright flavor that can be as sweet or tart as you want it to be.

History of the Mojito

Like many iconic cocktails, the Mojito’s fuzzy history spans the centuries starting with Sir Francis Drake in the 16th century.

Legend has it that Drake discovered the Mojito while docked in Havana and quickly embraced the Cuban drink’s ‘medicinal’ benefits. The famous pirate may not have invented the Mojito but gets credit for globalizing a version called El Draque.

Who Actually Invented the Mojito?
Was it indigenous South Americans who created the concoction for curative purposes or was it African slaves who had easy access to all of the ingredients including cane sugar? Nobody knows the definitive origin – hence the fuzziness.

Fast forward to the 20th century and the facts become clearer. We know that Ernest Hemingway drank Mojitos at Havana’s La Boguedito del Medi when he wasn’t drinking Daiquiris at Havana’s El Floridita.

We also know that James Bond drank a Mojito in Die Another Day, bringing the cocktail into the 21st century and harkening the age-old question. Shaken or stirred?

Today, the Mojito is an ubiquitous cocktail found at dive bars and cocktail lounges around the world. It’s also a cocktail that’s both easy and fun to make at home.

How to Craft a Mojito

Although Mojito ingredients can be counted on one hand, the ways to make it are seemingly limitless. Each Mojito recipe involves its own twist and ours is no exception.

Since we didn’t craft cocktails while we were digital nomads, we forgot the recipe we used back in Philadelphia. To remedy the situation, we sampled various Mojito recipes but none tasted as good as our memories. After trial and error, we finally recreated our version of the ultimate Mojito recipe.

We like to use fresh lime wedges instead of lime juice to achieve full flavor in our Mojitos. We also like to aggressively muddle the lime, fresh mint leaves and sugar before adding rum.

Some recipes call for gentle muddling but we find that it pays to be aggresive in our recipe. The Mojito is a rustic island drink that calls for a full infusion of flavors. To us, there’s nothing wrong with bits of mint pulp or lime zest floating in a sugary sea of rum and club soda.

Pro Tip
Skip simple syrup. The best Mojito recipes (including ours) use granulated sugar. The abrasion of the sandy sugar against the mint and lime makes for fully-realized Mojito flavors.

The most classic Mojito features Havana Club rum from Cuba. We crafted our Mojitos with a bottle of Bacardi Carte Blanca superior rum that we purchased for €15 at our local Lisbon liquor store. Any white rum will work in our recipe.

We like our mojitos shaken and unstrained. In our recipe, we muddle the mint, sugar and lime at the bottom of a shaker, add ice and pour the mixture, without straining (with the ice), into a highball glass. We then pour club soda to the rim of the glass as a finishing touch.

Pro Tip
You’ll want to use a pitcher if you plan to serve Mojitos at a party or small gathering of friends. However, we recommend muddling your Mojito in a cocktail shaker. The shaker’s narrow bottom creates maximum agitation during muddling.

Once you master the basic Mojito drink recipe, you can have fun mixing it up (pun intended) beyond the drink’s five ingredients. Options include adding various liquors, fruits and sweeteners.

Back in Philadelphia, we often muddled peaches into what we affectionately called a ‘Mindyljito’ based on our Hollywood gossip name Mindyl. Other times we added mango or strawberries depending on what fruit was in season and in our refrigerator.

If you don’t have rum at home, you can use gin to create a South Side Fizz. Or you can add vodka or tequila instead. It’s your Mojito. Anything goes.