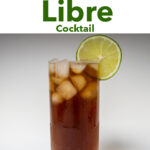 The Cuba Libre cocktail takes Rum & Coke to new heights with the simple addition of fresh lime juice. Read on to discover the dubious history of this popular rum cocktail plus an easy Cuba Libre recipe that you’ll want to follow again and again.

While the Cuba Libre’s name sounds exotic, this popular cocktail is as easy to craft as it is to drink. Its recipe only has a few ingredients and requires no special equipment. But its taste is why we love the Cuban cocktail so much.

To say that we love the Cuba Libre is an understatement. In fact, Daryl has declared the simple sipper to be his new favorite cocktail. This declaration should be no surprise if you know that he’s a big Coca-Cola fan.

Will Cuba’s national drink become one of your favorites too? The only way to find out if you love the Cuba Libre is to give it a try.

What Is a Cuba Libre Cocktail?

Yes, this Cuban cocktail simply sounds like a Rum and Coke crafted with lime. Technically, that’s what it is. However, the lime juice elevates the Cuba Libre to become its own thing.

Taking things further, the Cuba Libre is a next-level cocktail when it’s crafted with high-quality rum and freshly squeezed lime juice. Plus, it’s way classier to order Cuba Libre at a bar than it is to order a Rum & Coke.

History of the Cuba Libre Cocktail

Based on its name which literally translates to Free Cuba, it’s no revelation that the Cuba Libre has Cuban roots. These roots exceed a century and have a connection to two key events, namely the Spanish-American War in 1898 and the introduction of Coca-Cola to Cuba in 1900.

While there are plenty of colorful stories regarding who invented the Cuba Libre and where it was first imbibed, nobody knows the drink’s precise origin. And what about the drink’s name? Perhaps Cuba Libre was a rallying cry related to the recent war or maybe it was just an ironic phrase used to toast good times with good friends.

Either way, there’s no debate that this Cuban rum drink has passed the test of time. Equally important, it passed our lazy mixology taste test with flying colors.

The Cuba Libre’s ingredient is as short and sweet as the drink itself. In fact, it’s possible to count the following necessary ingredients on one hand:

You probably already have this handful of ingredients in you home bar or pantry. However, you may want to purchase a better bottle of rum for this recipe.

Before crafting our first Cuba Libre cocktail, we purchased a bottle of Havana Club Ańejo Especial Cuban Rum with a 40% ABV.

Double aged in oak barrels and with flavors that include cinnamon, orange and vanilla, this golden Cuban rum adds a smooth complexity to our Cuba Libre cocktails that we love. We plan to sip this tasty rum on the rocks – it’s that good – when we’re not in the mood for cocktails.

Don’t despair if you can’t purchase Cuban rum where you live. Use a different rum instead. Havana Club Añejo Clássico Rum, a golden rum that’s produced and aged in Puerto Rico, is a great option.

Buy a bottle of Havana Club Añejo Clásico at Drizly or Total Wine if you’re located in the US.

How to Craft a Cuba Libre Cocktail

You can improvise if you’re missing either required bar tool. For example, you can use a small angled measuring cup instead of a jigger. You can also use a long spoon if you don’t have a bar spoon.

Fill a highball glass with ice.

Pro Tip
You can use a lowball glass instead. However, a highball glass works better if you plan to sip your Cuba Libre with a straw.

Pro Tip
You can optionally muddle a lime. Either way, the key is to use a fresh lime when you craft a Cuba Libre cocktail.

Measure the rum and pour it into the glass. For this step, we recommend using a Japanese jigger to ensure accurate measurements and avoid spillage.

Top the glass with Coca-Cola.

Pro Tip
You could hypothetically use a different cola. However, Coca-Cola is the classic Cuba Libre cola that tastes great in this and other recipes.

Gently stir and garnish with a lime wheel or wedge.

Sipping a classic Cuba Libre make us happy and will likely make you happy too. However, feel free to try the following variations: