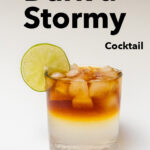 A Dark and Stormy cocktail tastes great regardless of the weather. However, those who don’t follow this cocktail’s rule could hit bumpy water. Discover that rule in our easy Dark and Stormy recipe while you learn how to craft the classic cocktail in just two minutes.

While it’s unlikely that the company will sue home mixologists, we’ve chosen to abide by this rule and buy a new bottle of rum to add to our ever-growing liquor collection. In our book, that’s a good thing since it completes our ever expanding bar.

What Is a Dark and Stormy Cocktail?

It would be easy to call a Dark and Stormy cocktail a Moscow Mule imitation crafted with dark rum instead of vodka but that would be incorrect.

Plus, mixologists typically use lowball or highball glasses when crafting Dark and Stormies instead of copper mugs.

We’d love to share a story about how the Dark and Stormy cocktail was invented on a dark and stormy night. That epic story would involve princesses and pirates… and would be fiction.

Instead, the Dark and Stormy traces its roots to Bermuda and a rum company.

Gosling Brothers Ltd. trademarked the drink in the 20th, a century after the Goslings crafted the original Dark ‘N Stormy cocktail. Or did they?

It’s possible that the Dark and Stormy was invented by sailors who added ginger to rum for medicinal purposes. Legend has it that one of those savvy sailors named the drink after its ‘dark and cloudy’ appearance.

We prefer this story even though it doesn’t involve either pirates or princesses.

As is the case with most classic cocktails, the Dark and Stormy recipe only requires a handful of ingredients:

While you likely have a lime and ginger beer at home, you may need to make a special trip to the liquor store before you craft your first Dark and Stormy cocktail. Goslings Black Seal rum isn’t exactly a liquor cabinet staple.

Distilled with a secret recipe passed through the generations, Goslings Black Seal rum has been a Bermuda favorite since it debuted in the 19th century. Originally called Old Rum and served on draught to locals, this Bermudan 80 proof rum ages in oak barrels.

The Goslings started bottling their rum in champagne bottles after World War One and sealed those bottles with black sealing wax. It was only a matter of time before the rum’s name changed from Old Rum to Black Seal. Today, Goslings dark rums are sold all over the world and can be purchased from Drizly or Total Wine in the US.

The original Dark ‘N Stormy recipe included a specific ginger beer – Barritt’s Ginger Beer. However, Gosling now makes is own ginger beer. Since we couldn’t find either of these ginger beers where we live, we bought Fever Tree ginger beer instead.

Pro Tip
Use your favorite ginger beer in this recipe.

Our recipe calls for a squirt of lime juice. We tried adding two full ounces as some recipes require and the resulting flavor was, for lack of a better word, too limey. Adding a squirt provides the necessary tang without taking over the flavor.

How to Craft a Dark and Stormy Cocktail

Crafting a Dark and Stormy cocktail requires no special skills and the following basic tools:

You can improvise if you don’t have a jigger. For example, you can use a small angled measuring cup instead.

We also use a bar spoon to float the rum but this step and tool are both optional.

Fill a rocks glass half way with ice.

Pro Tip
You can use a highball glass if you want to add more ice to your Dark and Stormy cocktail.

Measure the ginger beer and pour it directly into the glass. For this step, we recommend using a Japanese jigger to ensure accurate measurements and avoid spillage.

Use the same jigger to measure the rum.

While you can pour the rum directly into the glass, we like to float our rum using the back of a bar spoon. The result is an appearance that looks as dark and stormy as the drink’s name implies it to be. If you don’t do this optional step, the drink will still taste great but will look more dark than stormy.

Add a spritz of fresh lime juice and garnish with a wheel or wedge cut from the same lime.

Now it’s time to commence your dark and stormy night. How many Dark and Stormy cocktails you imbibe is up to you.

Don’t give up if you don’t have a bottle of Goslings Black Seal rum on hand. Instead, try one of the following Dark and stormy variations:

What are the ingredients in a Dark and Stormy?

What’s the best rum to use in a Dark and Stormy?

Goslings Black Seal Rum is the only rum to use in this recipe. Otherwise, your cocktail won’t be an official Dark and Stormy cocktail.

What’s the best ginger beer to use in a Dark and Stormy?

The original Dark ‘N Stormy recipe used Barritt’s Ginger Beer but you can use any ginger beer in our recipe.

Is the Dark and Stormy shaken or stirred?

Neither – there’s no need to shake or stir a Dark and Stormy cocktail.

What type of glass is best for the Dark and Stormy?

We like to serve this cocktail in a lowball glass but you could use a highball glass if you want to add more ice to your cocktail.

Gosling’s is a delicious rum, well worth adding to your cabinet! It has a distinct flavor profile that I haven’t encountered in any other rum I’ve tried - richer than most, but not as heavy or molasses-ey as Myers dark, which I find a bit overbearing at times. Although a copper cup is not a requirement, it does have the benefit of getting the drink extra-chilly, which can be nice on a hot summer day. Also, a Moscow Mule us made with vodka, not gin. Otherwise, a great article!

Thanks for commenting and for pointing out the typo. Much appreciated on both counts!

While vacationing in Maine a few years ago i tried a dark and stormy that was truly amazing and different. After having a couple I had to ask the bartender how she prepared it, the difference was to add six grapes port. So along with the traditional recipe she added an ounce of port. Play around with the amount of port for a very distinctive and fun drink. I settled on 0.5 ounces but it is up you to try.