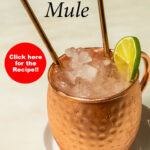 One of the most popular cocktails across America, the Moscow Mule is having a moment more than 80 years after it was invented. Discover the drink’s storied history and learn how to craft the classic vodka cocktail at home in just three minutes.

The Moscow Mule may be the most distinctive cocktail in the world.

Typically served in a textured copper mug, the vodka cocktail makes a statement as soon as it hits the bar. There’s no question about what’s inside the mug since it’s obviously a Moscow Mule cocktail. The mug and the drink go hand in hand.

And, because the Moscow Mule recipe is so succinct and balanced, there’s also no question that the cocktail will likely taste good. Very good.

What Is a Moscow Mule?

If you’re a cocktail fan, then you’ve probably imbibed a Moscow Mule or two during drinking outings in your home town. But do you know the mechanics of the beloved drink?

In simple terms, a Moscow Mule is a vodka buck that combines the simple, clear liquor with spicy ginger beer. Bartenders add fresh lime juice to complete the Moscow Mule’s recipe before serving the classic cocktail in its signature copper mug.

Asking if a Moscow Mule tastes as good in a different vessel is like asking if a rose by any other name would smell as sweet. The answer is yes… sort of.

You’ve probably had that disappointing moment when you’ve ordered a Moscow Mule and it arrives in a highball glass instead of a copper mug. Sure, the drink still tastes good but the experience is not quite the same. We’ve been there and done that too.

So, while you can certainly craft and drink Moscow Mule drinks in highball glasses at home, we say splurge and buy a couple Moscow mugs. While the mugs will cost about the same as a bottle of decent vodka, you’ll enjoy them long after the vodka bottle makes its way to the recycling bin.

As a bonus, these copper mugs will keep your drink refreshingly cold until you take your final sip.

History of the Moscow Mule

We’d like to tell you a story about how the Moscow Mule was invented in Russia and eventually made its way to America via spies escaping the cold war with the recipe strategically hidden in their cargo. But, alas, that story is a fantasy.

As it turns out, combining vodka and ginger beer and adding fresh lime juice worked better than Martin and Moran likely expected. But they didn’t stop there – the alliterative duo went the extra step by serving their drink in a copper mug and giving it an exotic name inspired by vodka’s homeland.

Despite the drink’s sophisticated, spicy flavor, the classic Moscow Mule recipe has a super short ingredient list that includes the following four items:

You probably already have these ingredients in your pantry or home bar. If not, you should be able to secure them at your local market or liquor store.

Any generic vodka will work in this Moscow Mule recipe. Accordingly, we recommend using the vodka bottle that you already have in your home bar.

We used Stolichnaya vodka in our recipe in a nod to the cocktail’s dubious Russia connection. Since Stolichnaya is actually produced in Riga, it’s a more choice that makes us comfortable.

Buy a bottle of Stolichnaya vodka from Drizly or Total Wine if you live in the US.

Fever-Tree is our typical choice when it comes to ginger beer. The company blends fermented ginger root from Cochin, Nigeria and the Ivory Coast to create this spicy yet balanced mixer. We like the way Fever-Tree ginger beer tastes in various cocktails including the Moscow Mule.

How To Craft a Moscow Mule

Crafting a Moscow Mule at home is both easy and fast. This drink doesn’t require any special tools or equipment beyond the following three items:

Don’t worry if you don’t have all of these items. They’re all easy to procure and you can improvise with other items in a pinch. For example, you could use an angled measuring cup instead of a jigger and a metal straw instead of a spoon.

The first step in our Moscow Mule recipe is to measure the vodka. We like to use a Japanese jigger to secure accurate measurements and avoid potential spillage.

Buy a Japanese jigger from Amazon if you need a jigger or want an inexpensive upgrade.

The second step is to pour the vodka into a Moscow Mule mug. If you don’t have one of these special copper mugs, you can use a highball glass instead.

After you measure and pour cold ginger beer and fresh lime juice into your mug or glass, all that’s left to do is stir and add crushed ice cubes. If you have a metal straw, you can use it in lieu of a mixing spoon.

Optional garnishes include lime wheels and mint springs. We like to garnish our Moscow Mules with lime wheels sliced from the same lime that we use for the lime juice.

Pro Tip
Slice your lime wheels BEFORE you squeeze the lime juice.

Once you experience how easy it is to craft a Moscow Mule at home, it’s a slippery slope before you raid your liquor cabinet to experiment with other liquors. Here are some ideas to get you started on your mule mixology journey:

What is a Moscow Mule cocktail?

A Moscow Mule is a vodka buck crafted with ginger beer.

Why is it called a Moscow Mule?

The Moscow Mule’s alliterative name was inspired by vodka’s homeland.

Where was the Moscow Mule invented?

The Moscow Mule was invented in Los Angeles.

What are the ingredients in a Moscow Mule?

What’s the best vodka for a Moscow Mule?

Any vodka will work in this recipe.

Is the Moscow Mule shaken or stirred?

The Moscow Mule is stirred, not shaken.