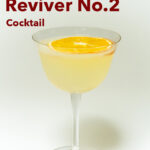 The Corpse Reviver No. 2 tastes like a dream despite its nightmare-inducing name. Learn the history behind this ghoulishly delightful gin cocktail and then craft one at home in just five minutes.

Yes, this drink’s name both intrigued and scared us. We wondered if drinking one would result in nightmares or sweet dreams. The only way to find out was to craft one ourselves.

What Is a Corpse Reviver No. 2 Cocktail?

Despite its colorfully creepy moniker, the Corpse Reviver No. 2 is a classic pre-prohibition cocktail that’s crafted with top tier liquors. And, since its ingredient list includes both dry gin and freshly squeezed lemon juice, this sour cocktail isn’t so different from cocktails like the Bee’s Knees, Clover Club and White Lady. However, we think that it’s unique ingredients provide the cocktail with a zippy flavor finish that makes it just a little bit better.

Beyond dry gin and freshly squeezed lemon juice, the Corpse Reviver No. 2’s ingredient list features absinthe, Lillet blanc and orange liqueur. And, for those with extra motivation, garnishing the classic cocktail with a dehydrated orange slice provides an additional bit of panache.

History of the Corpse Reviver No. 2 Cocktail

Originally crafted as ‘hair of the dog’ cocktails for over imbibers, Corpse Revivers date back to the 19th century – clearly a time when people handled hangovers differently than they do today. After all, Corpse Reviver cocktails aren’t exactly lacking in alcohol.

We don’t know whether this cocktail genre lost favor once people realized the counter-productiveness of drinking alcohol as a hangover remedy. However, we do know that time and Prohibition literally buried the Corpse Reviver. It took a London bartender to give new life to the deceased libation.

That bartender, Harry Craddock, included two Corpse Reviver cocktails in his iconic The Savoy Cocktail Book in 1930. It was the kickstarter that revived their luster like George Romero did for zombies.

Almost a century later, the Corpse Reviver No. 2 isn’t merely hanging on for dear life. Instead, it’s a popular classic cocktail that’s ordered at bars around the world with neither fear nor dread.

While the Corpse Reviver No. 2 ingredient list isn’t long, you may need to buy one or more of the following ingredients:

The Corpse Reviver No. 2 isn’t a French cocktail but we exclusively used French liquors when we crafted the cocktail at home. It was an unintentional move but we’re not complaining about the final result . Here’s a quick recap of those four French liquors:

Absinthe: We purchased a bottle of Absente 55 Absinthe for this and other recipes. Produced in France and as its name suggests, the green liqueur has a relatively low ABV of 55%.

Dry Gin: While any quality dry gin will work in this recipe, we chose to use Citadelle dry gin from France. Produced in Cognac, the premium gin features 19 botanicals and has an ABV of 44%.

Lillet Blanc: An aromatized wine, Lillet Blanc is the ingredient that brings the Corpse Reviver to life. It’s basically aged white Bordeaux wine blended with fruit liqueurs (mostly citrus). And, with a 17% ABV, it’s a delightful to drink over ice as an aperitif.

Orange Liqueur: Cointreau is our go-to orange liqueur for cocktail recipes that call for orange liqueur or triple sec as well as for some that don’t. We like Cointreau’s balanced flavor. It has a 40% ABV.

Buy bottles of Absinthe, Gin, Lillet Blanc and/or Cointreau from Drizly or Total Wine if you live in the US.

How to Craft a Corpse Reviver No. 2 Cocktail

Despite its spooky name, there are no tricks when it comes to the items required to craft a Corpse Reviver No. 2. In fact, you just the following basic bar tools:

The first step in this recipe is to add a dash of absinthe to a coupe glass and swirl it around until the absinthe coats the glass. Pour out the absinthe once the glass is coated and set the glass aside.

Next, measure the dry gin, Lillet blanc, orange liqueur and lemon juice and pour each directly into a shaker. For this step, we recommend using a Japanese jigger to ensure accurate measurements and to avoid spillage.

Add ice cubes to the shaker and shake until the liquids are chilled and combined. This step should take approximately 20 seconds.

Buy a Boston Shaker from Amazon if you don’t have a cocktail shaker or want an inexpensive upgrade.

Strain the chilled liquids into the absinthe-coated coupe glass.

Buy coupe glasses from Amazon if you want a matching pair for this and other cocktail recipes.

Finally, garnish the cocktail with an orange twist, wedge or wheel.

Pro Tip
Go the extra step and dehydrate an orange wheel if you’re cocktail-obsessed like us.

This Corpse Reviver cocktail may or not be your new favorite drink. Either way, feel free to experiment with the following variations:

Why is it called a Corpse Reviver No. 2?

The potent gin cocktail was intended to double as a hangover cure. Go figure.

How many Corpse Revivers are there?

There were originally four different Corpse Reviver cocktails. Two (numbers one and two) have passed the test of time. Numbers three and four have kicked the proverbial bucket.

What are the ingredients in a Corpse Reviver No. 2?

What’s the best dry gin for a Corpse Reviver No. 2?

We like to use French dry gin but any dry gin will work.

Is it possible to craft a Corpse Reviver No. 2 cocktail without Lillet Blanc?

You can use Cocchi Americano or Dry Vermouth instead of Lillet Blanc.

Is absinthe necessary when crafting a Corpse Reviver No. 2 cocktail?

You can use Pastis instead of Absinthe.

Is the Corpse Reviver No. 2 shaken or stirred?

The Corpse Reviver No. 2 is shaken, not stirred.

What type of glass is best for the Corpse Reviver No. 2?