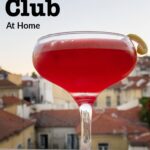 This Clover Club cocktail is simultaneously sweet and tart. Learn how to make this frothy pre-prohibition cocktail at home in just five minutes.

Our quest to travel the world through cocktails has taken us home. Well, not literally. Hear us out…

The origin story of many cocktails is fuzzy. The Clover Club is not one of those cocktails. Instead, this is a classic cocktail with a definitive birth at Philadelphia’s Clover Club.

Formed in 1882, the Clover Club met on Philadelphia’s Broad Street in the historic Bellevue-Stratford building that currently functions as a luxury Hyatt Hotel and offices. Beyond drinking cocktails, members of this club lived by the following motto: Who enters here leaves care behind, leaves sorrow behind, leaves petty envies and jealousies behind.

Despite its altruistic ambitions, The Clover Club didn’t survive prohibition or the 19th amendment. However, the pink drink named after the now defunct club lives on in bars and lounges around the world.

Fun Fact
Prior to prohibition and women’s suffrage, joining male-only clubs like the Clover Club were the norm for lawyers, journalists, bankers and other gentrified white men of privilege. Apparently these captains of industry liked to drink and weren’t concerned about the color of their cocktails.

The Clover Cub hits our sweet spot as a cocktail with just five ingredients including ice. These are the only ingredients required for the Clover Club recipe:

You don’t need any fancy equipment to craft a Clover Club cocktail. All you need is a jigger, shaker and knife.

Some recipes replace grenadine syrup with raspberry syrup. We choose to use grenadine for two reasons – it’s true to the original Philadelphia recipe and it’s an ingredient that lazy mixologists like us typically have at home.

Buy a bottle of grenadine syrup from Amazon.

In terms of gin, we typically use original Bombay dry London gin in this recipe. It reminds of our visit to the Bombay Sapphire distillery in England, plus we can easily find Bombay gin at local Lisbon liquor stores. However, you can use your favorite gin instead.

Pro Tip
If you’re located in the United States, go the extra mile and use Bluecoat gin to craft your Clover Club cocktail. Not only is it America’s original dry gin, but it’s also distilled in Philadelphia.

How to Craft a Clover Club Cocktail

Crafting a Clover Club cocktail is both easy and fast. Beyond squeezing fresh lemon juice and separating an egg white, these are the only required steps:

We’d be remiss if we didn’t address the elephant in the room, i.e. the inclusion of a raw egg white. To avoid any stomach discomfort, you’ll want to use the freshest available eggs for this recipe. You can use a pasteurized egg white in lieu of a fresh egg white if you’re squeamish.

The egg white is an important ingredient not for flavor but rather for achieving froth during the dry shake. But what is a dry shake?

Dry Shake Explanation
The phrase dry shake refers to shaking a cocktail without ice. Typical in cocktail recipes with raw eggs, dry shaking causes the eggs to emulsify into a frothy foam.

You’re now ready to make your own Clover Club at home! Sure, you could order this classic cocktail at a bar in Philadelphia or New York, but making one at home is highly satisfying not to mention cost effective.

The Clover Club is a sour gin cocktail in the same family as the Bee’s Knees and Tom Collins. We recommend you follow our classic Clover Club recipe before you try one or more of the following variations: