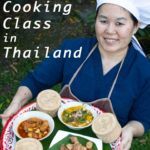 See why taking this Chiang Mai Cooking class is a must for lovers of Thai food who want to learn how to cook Thai food dishes including our favorite Thai dish – Khao Soi.

In fact, there are more than 50 cooking class options in Thailand’s second largest city. With so many Thai cooking classes in Chiang Mai, food-focused visitors to Thailand often count this culinary experience as a holiday highlight.

Active participants learn about the origins of Thai cuisine in a casual, interactive setting. Plus, cooking Thai food can be a lot of fun. The challenge is finding the right Chiang Mai cooking class for your interests and cooking level.

Since taking a Thai cooking class in Chiang Mai in 2016, we wanted to delve deeper into Chiang Mai’s local Lanna Thai cuisine. After doing some research on the TakeMeTour website, we signed up for a Lanna style cooking class in the countryside just outside the city center.

What made this cooking class different than most in Chiang Mai? We chopped lemongrass and chicken legs. We boiled and fried noodles. We simmered fresh coconut milk over a charcoal stove. We even prepared homemade chili oil.

This was a cooking class that truly exposed us, as students, to the fundamentals of Lanna cuisine and life in this beautiful, green corner of Northern Thailand.

Lanna food, influenced by the cuisines of Burma and China, has a unique flavor profile featuring ingredients that differ from other Thai food favorites. Lanna food originates from North Thailand and is unlike Thai food found in Bangkok, the Southern beaches and Issan in the Northeast.

Not a passing fad, Lanna cuisine dates back over 700 years when Lanna was a kingdom separate from Thailand. Beyond Lanna cuisine, the kingdom had its own language, customs and traditions. As we learned during our Chiang Mai cooking class, many locals still speak the sacred Lanna language and cook the food of their ancestors.

Popular Lanna Thai menu items include Khao Soi, Curries and Chiang Mai Sausage. Since Lanna literally translates to one million rice fields, it’s no surprise that rice is an integral part of Lanna cuisine. Harkening back to days when most Lanna people worked as farmers, sticky rice is popular for both its portability and nutritional value.

Beyond rice, Lanna food uses a variety of local products like finger root, ginger, soy paste, kaffir lime, turmeric and chilis. Proteins run the gamut from chicken to pork to frogs. If you haven’t eaten frogs before, they taste like chicken. That’s our story, and we’re sticking to it.

Pro Tip
Be sure to include Chiang Mai and/or Chiang Rai in your Thailand itinerary if you’re curious to try Thai Lanna food at the source. These two Thai cities are both located in the former Lanna kingdom.

Watch our YouTube video and then read on for the full story.

Our whirlwind day included a stop at a bustling Chiang Mai market, a stroll through an organic farm and many hours of cooking and eating. Panphailin Puntira (Lin) guided us through the process, teaching us new cooking skills and sharing stories that brought Lanna food to life.

Lin spent the day with us as she patiently taught us about the history of Lanna food and the cuisine of her family which orignially hails from nearby Yunnan, China. We cooked, we laughed and we ate a lot of great food. By the end of the day, we felt like we were part of the family.

We quickly learned that cooking has been a passion since Lin’s mother taught her to cook when Lin was just three years old. Since opening her Lanna Thai cooking school in 2014, Lin has shared her passion with hundreds, if not thousands, of international chefs and food travelers.

Lin started our Chiang Mai cooking class experience with a shopping trip at a bustling local market. Though this was not our first visit to a Thai market, it was the first time with an expert who took the time to explain the products that make both traditional Thai food and Thai Lanna food so unique and flavorful.

As we added healthy items to our baskets, Lin explained the different products that filled the inside of the busy market and spilled onto the street. We learned about different vegetables, discussed which chilies are sexier and tasted pig brain with minced pork. The pig brain was optional, but, hoping to improve our intelligence, we were game to give it a try.

This market trip wasn’t just for fun. We literally purchased many of the necessary ingredients for the recipes that we’d be cooking throughout the day such as finger root, pork belly, kaffir lime and freshly killed frogs.

Pro Tip
Quench your thirst with a bag of iced coffee or iced tea at the market. These Thai beverages are both sweet and satisfying on a hot day.

Since we didn’t buy all of the necessary ingredients at the market, we supplemented our bounty at Lin’s organic garden. Lin grows a mix of vegetables and herbs including holy basil, sweet basil, ginger root, okra and mushrooms – all crucial in Lanna cuisine and better when fresh. She even cultivates her own mushrooms in a special wooden shed.

This Chiang Mai cooking class is not for people who want to sit around and nibble all day. Not only did Lin teach us the basics of Thai cooking, but she also put us to work in all aspects of the food preparation.

We not only sliced, diced and chopped but we also squeezed milk out of freshly shredded coconut and ground rice into flour. We even made red curry the old fashioned way by pounding our ingredients with a mortar and pestle.

Pounding ingredients with a mortar requires a certain skill of rhythmic hitting and twisting that may seem simple but can only be learned through constant repetition and practice. The constant slapping sound is even used to measure a woman’s suitability in the matrimonial kitchen. Making curry is that central to Northern Thai life.

After falling for Khao Soi during our first visit to Chiang Mai and continuing the love affair at Andy Ricker’s Pok Pok in Portland, we were excited to learn how to make the popular coconut curry noodle soup. Lin put us to work with the aforementioned mortar and pestle which we used to pound a melange of ingredients into khao soi curry paste. But that was just part of the process.

Sure, travelers can buy Khao Soi at many Chiang Mai eateries. But this Khao Soi was special, partly because we helped to make it and partly because it was real deal Khao Soi made with love and a whole bunch of Thai ingredients.

Pro Tip
Making Khao Soi is not a quick process. Beyond the prep work, simmering takes at least three hours.

Ironically, we could have happily stopped after the Khao Soi and left feeling positive about the Chiang Mai cooking class. But the hearty bowls were just the start of our Lanna meal.

For the second course, we prepared two curries and Chiang Mai Sausage. No surprise with Lin, we prepared both from scratch.

The first curry was a mixed vegetable curry with frog, chili, pumpkin, eggplant and tarot that went kaboom when we tasted it. The second curry was a milder sugar cane curry based on a Burmese recipe.

For the Chiang Mai Sausage, we combined minced pork, pork belly, curry paste and lemongrass and stuffed the mixture into intestines before grilling the sausage in a spiral shape. Many people enjoy sausage without knowing how it’s made. If you take Lin’s class you’ll know and appreciate the process.

The original menu for our Lanna style cooking class ended with Khanom Wong (Northern-Style Donuts), but Lin made a quick change when she learned that we have a sweet spot (pun intended) for Khanom Krok (Coconut Rice Pancakes). We’d eaten the Northern Thailand specialty at Chiang Mai street markets but had never made the dish ourselves.

Earning dessert, we physically ground rice into flour and then mixed it with coconut milk and palm sugar. We had previously squeezed the milk from fresh coconut flesh, forming a full circle for the day when we used the milk in this Lanna recipe.

Using a pan handed down from Lin’s mother, we fried the batter into individual pancakes. The end result wasn’t particularly pretty, but our Khanom Krok tasted fantastic if we do say so ourselves.

After plating the little treats on banana leaves and topping them with scallions, we ate the Khanom Krok until they were just a happy memory. It was just one experience we’ll remember from this special day of cooking and camaraderie.

Pro Tip
Memories are not the only souvenir from this Chiang Mai cooking class. Each participant gets a 70-page cookbook filled with Thai Lanna recipes.

Air Asia flies to Thailand from many major Asian cities. Our Air Asia flights from Da Nang to Bangkok and from Bangkok to Chiang Mai were both pleasant and uneventful.

Also, don’t forget to check out current Thailand visa rules before your trip.

Ibis Styles is a great Chiang Mai hotel option for short-term visitors. We found the moderately priced hotel to be both comfortable and conveniently located near Maya Mall.

Amenities include free juice in the lobby, a swimming pool and daily breakfast served buffet style.

Hungry for More in Chiang Mai?

Check out our Chiang Mai food guide for tips on what and where to eat in Chiang Mai.

Sponsorship
We thank TakeMeTour and the Tourism Authority of Thailand for hosting us to facilitate this article. TakeMeTour offers this cooking class and other food-related activities as part of its Local Table gastronomy campaign in collaboration with the Tourism Authority of Thailand. These culinary activities provide tourists the opportunity to explore Thai culture in the best way possible – through the country’s awesome food. We also thank their partners Accor Hotels, Air Asia and dtac.