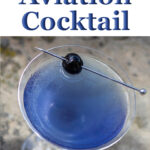 Don’t be confused by its deep blue color. The Aviation cocktail is a serious cocktail for serious drinkers. Read on to learn how to craft the classic gin cocktail at home in just five minutes.

Based on its appearance, you might think that the Aviation Cocktail is a fruity-tooty cocktail. You would be wrong.

Despite the Aviation’s fun blue color that flirts with purple, this pre-prohibition cocktail’s flavor is far from fruity. Instead, a handful of ingredient combine to form a profile that skews tart but with a floral finish.

After discovering the classic yet obscure cocktail while researching drinks to craft with our bottle of Luxardo maraschino liqueur, we were intrigued by the Aviation gin cocktail both for its name and its ingredient list.

Also, did we mention that it’s blue?

What Is the Aviation Cocktail?

The Aviation Cocktail is sour gin cocktail that lived under the radar for more than a century. This sad status likely had ties to the scarcity of one of the Aviation’s key ingredients – crème de violette. Plus, maraschino liqueur isn’t exactly a home bar staple.

But, for those who make the extra effort to procure both crème de violette and maraschino liqueur, ‘the sky’s the limit’ with this classic drink. As it turns out, the Aviation is as easy to craft as it is to imbibe. As a bonus, you can surprise guests at a cocktail or dinner party with the striking drink’s ‘stratospheric’ azure color.

How Did the Aviation Cocktail Get Its Name?

You may be wondering how the Aviation cocktail get its name. After all, nothing about the drink’s recipe or consumption involves aircraft. To answer this question, you just need to look up.

Planes fly in the sky AND the Aviation’s color is sky-blue. Plus, the cocktail’s exclusive ingredient list conveyed a level of luxury and fantasy that correlated with the exclusivity of air travel a century ago.

We equate the cocktail’s name to the way we use fantastical names for products we consume today like Starburst, Mars Bars and even Comet Bleach. Not that we would ever think of drinking bleach…

History of the Aviation Cocktail

The Aviation cocktail’s history is almost as old as the aviation industry.

Innovative bartender Hugo Ensslin invented the Aviation cocktail recipe at the Hotel Wallick in New York City and included it in his book Recipes for Mixed Drinks in 1916 – just 13 years after Wilbur and Orville Wright flew their plane at Kitty Hawk. While that auspicious plane flight only lasted 12 seconds, the cocktail has survived for more than a century.

Admittedly, it’s been a bit of a bumpy flight. While plane travel soared over the ensuing decades, the Aviation cocktail almost crashed into obscurity. But why?

First came prohibition when serving alcoholic beverages was taboo. Then there were issues with the drink’s ingredients. Crème de Violette, the liqueur that provides the drink’s blue hue and floral flavor, was practically impossible to buy in America for much of the 20th century. And to further complicate matters, Ensslin’s original gin of choice, El Bart, ceased production in the 1950s.

The nail on the proverbial coffin almost came in 1930 when The Savoy Cocktail Book included an Aviation cocktail recipe without Crème de Violette. Clearly, that version didn’t go over well since the Aviation took a nose-dive in popularity before it coasted on the fringes with hard-core cocktail connoisseurs.

Thanks to a 21st century return to craft and the availability, albeit limited, of Crème de Violette, the Aviation has risen from near-oblivion. And, to that, we say cheers!

We’ve already touched on the Aviation cocktail’s short list of ingredients. This is the full ‘crew’:

While the original recipe called for now-defunct El Bart gin, we used Citadelle gin from France instead. Since any dry gin will work in this recipe, we recommend that you use your personal favorite. Better yet, use Aviation gin if you have access to the American dry gin produced in Portland. The name synergy is almost too good to be true.

And then there’s the Crème de Violette. After eating violet candy in Parma, we were intrigued to craft a cocktail with liqueur produced from the wild flower.

Produced in Germany, The Bitter Truth’s Violet Liqueur fit our bill with its deep color and 22% ABV. Distinctly floral, it’s not a liqueur that we’d choose to drink on its own. However, the purple potent potable is ideal in our Aviation cocktail recipe.

Buy bottles of Gin, Maraschino Liqueur and/or Violet Liqueru from Drizly or Total Wine if you live in the US.

How To Craft an Aviation Cocktail

As is the case with most classic cocktails, crafting an Aviation is both easy and fast. We crafted ours in just five minutes using the following basic bar tools:

The first step is to squeeze fresh lemon juice and pour it into a cocktail shaker. You can use your hands to squeeze the lemon like we did unless you’d rather use a lemon squeezer.

The second step is to measure the three liquors (gin, maraschino liqueur and crème de violette) and pour each into the same shaker. We used a Japanese jigger to measure our liquors to achieve accurate measurements and clean pours. However, you can use a basic jigger or small angled measuring cup instead.

The third step is to add ice to the shaker and shake it vigorously until all the ingredients are combined and chilled – about 10 to 15 seconds.

Warning
At this juncture, the Aviation drink (and your hands!) should be ready for the next step. Brrrr…

The fourth step is to strain the cocktail into a small martini glass. You’ll immediately notice the Aviation’s vivid color as the liquid hits the glass.

Pro Tip
Use a cocktail strainer to guarantee a ‘smooth landing’ into your glass.

We suggest that you follow our recipe at least once before you set your course for the stars. When your’re ready to experiment, we suggest the following Aviation alternatives:

What is an Aviation cocktail?

The Aviation tastes different form other sour gin cocktails due to the inclusion of maraschino liqueur and crème de violette. These liqueurs add sweet and floral undertones to the Aviation’s flavor profile.

Where did the Aviation cocktail get its name?

The Aviation’s name is related to its sky blue color.

Where was the Aviation invented?

The Aviation was invented in New York City.

What are the ingredients in an Aviation?

What’s the best gin for an Aviation?

Any dry gin will work in this recipe.

Is the Aviation shaken or stirred?

The Aviation is shaken, not stirred.

What type of glass is best for the Aviation?

El-Bart Gin is not defunct... el-bart.com it is my family gin brand started by James Sceats

This has been my go to cocktail for the summer after trying it in a restaurant earlier in the year… I’d highly recommend Rothman & Winter Crème de Violette over Bitter Truth and definitely stick with Luxardo Maraschino liqueur if you can get it. The other couple options on the market are pretty nasty. Also, be sure you’re maraschino liqueur- not cherry liqueur. They are not even similar.

Spelled Fiolette at some point and towards end had with with Also, as an aviation drinker, I found that .25 oz Creme de Violette is the perfect amount.

Thanks for both tips. We corrected the typo now and will try your recipe suggestion later.

With a “spirit forward” drink like the aviation, why do you shake and not stir? I thought shaking was for juice heavy combinations.

@Daryl and Mindi Hirsch, and Jane, Jane, this drink is a gin sour (or punch) sweetened with maraschino and violette. The very definition of a punch is a drink where the strong (liquor), weak (water pulled during shake), sour (lemon juice), and sweet (the liqueurs) elements are in balance and no single one predominates. It's why the majority of mixed drinks served up to the drinking public are sours or punches, because it is such a friendly and palatable form to a wide swath of people (think Margarita, Daiquiri, Cosmopolitan).

I agree with other commenters here that the recipe proportions are not ideal for this drink. I would use 2 oz gin, .75 oz lemon juice, .5 oz maraschino, .25 oz violette. If you look at well thought out recipes for sour drinks these are the usual proportions, especially equal measures of the sour and sweet ingredients. Now in the case of this drink, I also find that the drink usually turns out a little imbalanced toward the sour juice. So in agreement with Greg, I usually add about a barspoon (.5 teaspoon) of simple syrup to get the proper sweet-sour balance. Otherwise this drink can tend to be a little tooth-strippingly tart.

You might ask "why not use more of the liqueurs to get the balance"? That's what it seems is the intention of the recipe presented here. Because both maraschino and violette are VERY forceful ingredients. They are both what are known in mixology land as "bullies". Better to keep them in check and get the needed sweetness from a neutral source.

A properly made Aviation should be a pretty faint blue with a gradient to purple caused by the cherry at the bottom of the glass. Elegant... subtle. I agree with Ryan, as well, that Rothman & Winter is a better violette choice. I've always thought The Bitter Truth is both wildly over flavored and over colored. Combine that with a recipe that calls for double the violette that is customary in this drink, and the result is something that looks like a 70's drink from Friday's, and most likely smells like a grandmother's underwear drawer.

And yes, this drink should be shaken. It greatly improves integration of the disparate elements, and aeration is a sour's best friend. I hope this helps if you take a stab at this one. Be patient and give it a few tries. Sours are much tougher than true cocktails to execute well, because they depend on critical balances.

And to Daryl and Mindy, whenever I've tutored someone in mixology, the first principle I try to get them to buy into is that to make a drink its best, you have to understand what it's trying to be. I've read a number of your articles recently, and every one of them, in my opinion, betrays a fundamental lack of understanding of traditional mixological principles on your part. There's obviously a lot of new interest in this area and a lot of people coming forward to present themselves as experts to guide those who want to learn. I know everyone has to pay the mortgage, I just wish that those who are trying to lead the blind, could themselves see more clearly.

While we like to shake our aviation, you can certainly stir yours. It will surely taste good either way. Cheers!