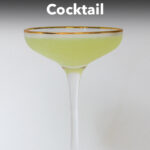 Don’t underestimate the Last Word cocktail. Despite its short ingredient list and pale green hue, the prohibition potable is a sophisticated sipper that deserves a seat at the table.

If we had just one word to describe the Last Word cocktail it would be deceiving. Despite its light jade green appearance, the Last Word is a complex drink that packs a punch.

Much of that complexity comes from green Chartreuse produced solely in the French town of Voiron near Grenoble. Once we bought a bottle at our local bottle shop, it was only a matter of time until we made our first Last Word cocktail at home.

What Is the Last Word Cocktail?

But to call the Last Word herbaceous is only part of the drink’s story. Although citrus makes it a sour gin cocktail, maraschino liqueur provides a welcome hint of sweetness. In other words, one word isn’t enough to describe the Last Word.

Instead, it’s a cocktail that needs to be imbibed to be fully understood.

History of the Last Word Cocktail

Research into the Last Word’s history reveals a past that started at the Detroit Athletic Club a century ago during the roaring days of Prohibition. The cocktail was apparently all the rage in the Motor City. Later, after it was featured in Ted Saucier’s Bottoms Up in 1951, it drove off a cliff and fell into oblivion for decades.

But that wasn’t the Last Word’s last word…

The cocktail got a new life in the 20th century thanks to Murrary Stenson, a Seattle bartender, who pulled the Last Word out of oblivion and turned it into a cult cocktail. Today, the Last Word is a fixture at cocktail bars throughout the US and beyond.

We’ve already spilled the beans on the Last Word’s short list of ingredients. To avoid confusion, here they are again:

The ratio for the Last Word’s four liquids is a simple 1:1:1:1 calculation. Based on the size of our glass, we measured 3/4 ounce of each in our recipe. You could easily increase the measurement to 1 ounce or decrease it to 1/2 ounce based on your glass size. The drink will taste the same as long as you follow this ratio.

The Last Word’s three liquors are green Chartreuse, dry gin and maraschino liqueur. Read on to see which brands we used to craft this cocktail.

Green Chartreuse intrigued us before we bought it due to the French liqueur’s distinct green color and hefty price tag. We wondered if it tasted like absinthe and how we would use it.

As it turns out, green chartreuse tastes nothing like absinthe. Originally produced by Carthusian monks in 1737 at La Grande Chartreuse abbey, the liqueur’s ingredient list includes 130 herbs and plants. Its ABV is 55%.

We bought a bottle of Chartreuse Verte produced by Les Pères Chartreux. These fatherly figures have produced the verdantly green elixir at their Aiguenoire distillery in Entre-Deux-Guiers for over a century. Disclosure – This was the only brand of green Chartreuse available at our local liquor store.

Fun Fact
Colored with saffron, yellow Chartreuse is sweeter and has a lower ABV.

While any quality dry gin will work in this recipe, we chose to use Citadelle dry gin from France. Produced in Cognac, the premium gin features 19 botanicals and has an ABV of 44%.

Luxardo produces our preferred maraschino liqueur. No surprise there since we’re already obsessed with the Veneto, Italy company’s maraschino cherries.

We initially bought this bottle of liqueur to craft Hemingway Daiquiris and have since used it to craft Aviation, Martinez and Last Word cocktails. It has a 32% ABV.

How To Craft a Last Word Cocktail

Like other classic cocktails, the Last Word is incredibly easy to craft with the most basic of bar tools. We used the following bar tools in our recipe:

Don’t worry if you don’t have any or all of these tools. Each is inexpensive and you can improvise in a pinch if you don’t already own them.

The first step is to measure each of the four liquid ingredients. We like to use a Japanese jigger to ensure accurate measurements and make clean pours. Accurate measurements are especially important in this recipe to achieve the cocktail’s intended flavor combination.

Click here to buy a Japanese jigger if you don’t have a jigger or want an inexpensive upgrade.

The second step is to pour the liquids into a shaker as you measure each. We like to use a Boston shaker for this and other recipes since it doesn’t leak and is dishwasher safe.

Click here to buy a Boston shaker if you’re sick of leaky shakers too.

The third step is the step where the magic happens. This is when you add ice to the shaker and vigorously shake for about 20 second until the the liquids are chilled and combined.

The final step is to strain the green cocktail into a martini or coupe glass. You can add a maraschino or two as garnish but be aware that doing so may will likely stain the drink’s green color.

This recipe isn’t the final word on the Last Word cocktail. Feel free to experiment if you’re feeling creative or if you’re missing one of the recipe’s four ingredients. Here are some ideas to get you started:

You can optionally garnish this cocktail with a Maraschino cherry or two.

My favorite cocktail. Don't forget to fine strain to get rid of the cloudiness.