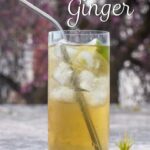 We don’t know why combining whiskey and ginger ale and adding lime juice tastes good. It just does.

Technically an Irish Buck, the Whiskey Ginger is a cocktail that we often forget about between drinking sessions. Luckily, St. Patrick’s Day happens every March 17th which reminds us to craft cocktails with whiskey and ginger ale.

Sure, we could drink pints filled with foamy Guinness or artificially-colored green beer instead but we’d much rather whip up Whiskey Gingers in just five minutes and sip them through metal straws. To us, it’s the classier, tastier St. Patrick’s Day drink option.

What Makes the Whiskey Ginger Special?

Jameson whiskey matures for at least four years in oak casks previously used to age Kentucky bourbon and Spanish sherry. Due to this maturation process and its triple distillation, Jameson’s whiskey has a particularly smooth finish that works well in this recipe.

Originally operating as Bow Street Distillery in Dublin, Jameson’s history dates back to 1780. Named after owner John Jameson, the whiskey is a true ‘grain to glass’ product made with both malted and unmalted barley as well as French maize and Irish water.

A family enterprise for two centuries, Jameson distilled millions of gallons of whiskey in Dublin before moving the production operations to County Cork in the 1970s.

We learned about Jameson’s rich history and its production process during a Dublin distillery tour in 2016. Simultaneously informative and touristic, the experience ended with a Jameson whiskey tasting and glasses of Jameson Whiskey Ginger.

Click here to book a tour and tasting at Jameson’s original distillery in Dublin.

The ingredient list for crafting a Whiskey Ginger is ridiculously short with just the following ingredients:

Jameson is the only liquor that we use in our Whiskey Ginger cocktail recipe. It has an 40% ABV and is easily the most popular Irish whiskey.

You should be able to find Jameson at your local liquor store since owner Pernod Ricard distributes it around the world. However, you can use another whiskey if you have a favorite bottle in your cabinet.

How To Craft a Whiskey Ginger Cocktail

Crafting a Whiskey Ginger is as simple as measuring, pouring and stirring whiskey and ginger ale in a 2:1 ratio. Our recipe requires no special tools or gadgets. These are the only items we used to craft and drink this whiskey cocktail:

The second step is to pour the liquids into a highball glass and squeeze fresh lime juice from a lime wedge.

The third step is to gently stir the drink. We use a bar spoon but any long spoon should work.

The final steps involve adding ice and a fresh lime wedge. All that’s left is to sip and enjoy.

While we like to craft cocktails with whiskey, ginger ale and lime, you may want to mix things up (pun intended). Here are a few ideas to spark your creativity: